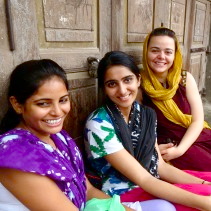 Phrasebooks are written for tourists. They contains sentences such as “I don’t want to stop at the carpet shop!” or “I have a prescription for this drug.” When you live in a place for a prolonged period your phrasebook begins to fail.

Last week, I found myself in the city of Ahmedabad, about an hour and a half northwest of Baroda. Pryia and I joined six women of the Nari Adalat Women’s Court (NA) on a field visit as they were supporting Nirali, a woman whose divorce proceedings started nine years ago. Every month, she makes the trek to the state court in Ahmedabad where her in-laws live. Although she has a good relationship with her husband, talking to him almost every day, he is unwilling to stand up to his parents on her behalf. Nirali eventually left when her mother-in-law tied her up and attempted to strangle her. She has lived with her parents since then.

Nirali decided to try the NA after years of support from VIKALP. After several hearings, she asked the court to help her confront her in-laws so she can move back in with them. The NA tried to dissuade her from this decision, but when she proved unwilling to change her mind, they agreed to accompany her. Nirali is confident she can stand up to them.

“I never said no when they abused me, now I know better.”

While this decision might be hard to understand, her choices are limited. For divorced or separated women, widespread alienation and discrimination regularly result in violence, poverty, and a lack of independence. At the very least, Nirali wants her possessions returned and the financial maintenance her husband owes her.

When we arrive at the house, a shouting match ensues through a gate as the in-laws do not want to talk to Nirali, maintaining that the courts will reach a decision. The shouts attract curious neighbors who come out to see the commotion. Some of the neighbors are family members who question Nirali’s claim.The women boldly and patiently describe Nirali’s case, stating they are from the NA. There seems to be reassurance in being from the NA even in a community unfamiliar with the women’s courts.

Neighbors “talk” to the Nari Adalat

Telling the NA to leave

After getting nowhere with the in-laws, half of the women go to the police station and half, including myself, stay behind. When I try to communicate, the words “neighbors”, “crazy”, or “arrest” do not show up in my guidebook so I smile instead. After about an hour, two of the women return with two police officers. We find out the in-laws snuck out of the house from the side street we were not watching. The police officers find their absence suspicious and we all go to the police station.

There, the women solicit the advice of the Vikalp main office several times. While they might be unsure of the proceedings in this situation, their presence gives Nirali strength to tell her story, and the police officers listen. Nirali files a report that will help her document the attempt to confront her in-laws. The police officers will try to contact the husband and write a report to the judge in charge of her case.

The impact of our visit remains to be seen. The women are hopeful the intervention will speed the process, and the judge will have an account of Nirali attempting to talk to her in-laws. Since we were unable to have a productive conversation, our actions might seem limited. However, the greatest improvement seems to be in Nirali’s attitude. On our way back to Baroda, Nirali keeps repeating the word “daring” and saying statements such as: “I never thought I could be so daring”, “I stood up to my in-laws”, “I’ve never spoken to them like that.” Such empowering changes are the beginning of the fight against traditional gender roles that relegate women to silent bystander status. Nirali cannot stop smiling and recounting the story. She stood up to her in-laws, surrounded by women who encouraged her to voice her grievances and reclaim her life. Since the fact-finding mission, Vikalp helped Nirali transfer her case hearings to Baroda, forcing the in-laws to travel and incur the expenses instead.

As we were saying goodbye, Jasi, one of the leaders of the NA, smiled and said in Hindi, “We give people stress, we don’t remove it.” My phrasebook does not recognize the words “give”, “people”, “stress”, or “remove”.