“It has been an enlivening moment for us,” said, Lulu Richards, Head of the Women Wing of the National Ebola Survivors Network of Liberia. “We are grateful that people around the world still think about us. Since we came from the ETU, five years ago, all our engagements have been that they call us and take something from us including plasma, as they say, to make vaccines and drugs to help other people who are suffering from Ebola.”

“But this project really showed us that people are willing to listen to us and we are glad that we were able to go through and complete the training and now have completed our stories.” She continued: “But this should not be the end. We look forward to bigger cooperation with AP; as many of our survivors are in isolation. Since their losses during the crisis, they have not had the opportunity to recoup. We hope people out there will read our stories and be moved to reach out to us.”

Lulu is a 35-year-old Ebola survivor. She contracted Ebola through caring for her friend whom she had met sometime in 2014 when Ebola was raging in Liberia. She told me during my interview trail with women survivors, she had taken her daughter to a local health facility for treatment. There she met her friend along with her children. The lady, Lulu said, was helpless at the health facility, vomiting and passing stool. Lulu told me that it had been a long while when she last met her friend. This prompted her to intervene. It was here and then that her Ebola episode began.

That friend passed away a few days later and Lulu became ill. She was taken to the treatment unit and recovered. But upon returning to her community, she faced stigma. Among the many experiences she recalled, was her being refused to fetch water at the community borehole after her recovery. Each time she attempted to fetch water, she told me she would be shunned by the community dwellers who were there. 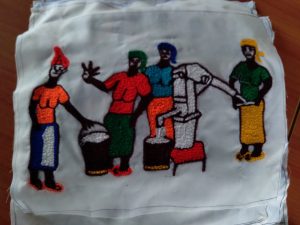 Lulu’s ordeal is similar to the stories we have heard during the last three months working with the Ebola Survivors Network of Liberia. Under AP’s sponsorship, we launched a 7week Embroidery Skill Training program for 12 Liberian women randomly selected based on their willingness to tell their stories. They all had contracted Ebola during the 2014-2016 Ebola Epidemic in Liberia, were taken to the ETU and recovered from the virus.

On June 22, the Embroidery Training started in Monrovia at the Network’s Office. The objective was to ensure that the ladies first acquired skills in embroidery, and second, use the newly acquired skills to tell their Ebola stories. They each embroidered on a piece of textile, a defining moment they recall during their Ebola ordeal, either at the time they contracted Ebola, when they were taken into the Ebola Treatment Unit or when they returned to their communities following recovery.

Some of the stories we have heard about, and which were embroidered as the story telling project came to a close today include, Patricia Fahnbulleh, a 25-year-old young woman, who was just 19 at the time of the Ebola outbreak. Patricia contracted Ebola through caring for her sick father, who before it was revealed, died of Ebola. She remembers a pivotal moment in the ETU when each morning she would wake up with all those that were around her bed dead, and would be mistaken as well, as a dead person and disinfected with a chlorinated spray by the ETU workers.

She narrated that she would wake up suddenly in astonishment. When she asked why the ETU workers were spraying her, she said to me, they would tell me, all these people who are around here are dead; so, we thought you too were dead. This happened to her on many occasions. Patricia embroidered this story remembering this moment.

Finda Howard, 35, recalls Police Officers locking themselves in at the Pipeline Police Station in Paynesville, when she told them that her husband had died of suspected Ebola symptoms, and that she and her little child had been in the house with the corpse for three days and no Ebola Response Team had come to collect the body. She recalled that all the officers that were sitting outside the Police Station locked themselves in and left her standing outside around midnight. They feared that by talking with Finda, the widow of a suspected Ebola victim, they would contract Ebola. For her, this was more than traumatic. Finda embroidered this experience. 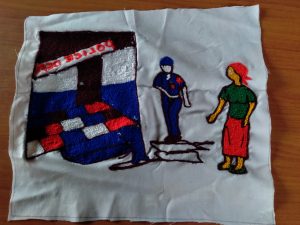 Their courage is worth commending. As we brought the activities to a close, we encouraged the ladies to continue to meet and pursue common causes and explore partnership with AP and other groups interested in ensuring Ebola Survivors in Liberia and across the West African sub-region are fully integrated and empowered in their communities.