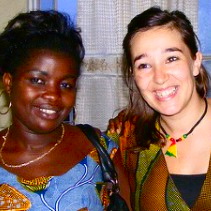 Elisa Garcia (Bureau pour le Voluntaries au service de l’Enfance et de la Sante - BVES): Elisa, a Spanish national, studied at the Université Libre de Bruxelles (Brussels, Belgium) from 2004 to 2005. In 2006, she graduated with a MA in Media Studies from the Universidad Complutense de Madrid (Spain), In September 2007 Elisa entered a PHD program at the University of Deusto (Bilbao, Spain). She graduated in 2008 with a MA of Peace and Conflict Studies. Between March 2008 and March 2009 Elisa served as a visiting researcher in the Peace Studies Group in the CES (Center for Social Studies) of University of Coimbra (Portugal). She has also interned at Scouts, Amnesty International and a nature preservation foundation.

Tomorrow, or thursday, depending on the boats that cross the Lake Kivu I will leave Bukavu and I will head to the Island of Idjwi with Jolly Kamuntu to train a group of women of Iwdji. I am quite excited because I am going to one of the most beautiful, remote and interesting places in the DRC (no electrity, no running water, indigenous populations, subsistence agriculture…) and because I am going with Jolly Kamuntu, the president of AFEM and a brilliant journalist. 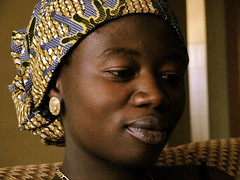 We are preparing our trip and having a lovely chat. Jolly is telling me about her last encounter with Laurent Nkunda, the fallen leader of the CNDP and one of the main figures and keys to understand the ongoing violence in Eastern Congo and I sit back in my chair. I can´t believe that this cheerful woman, with the aspect of a nice antie, has made her way twice (once in 2004, after the siege of the city of Bukav and other in 2008, after the attack over Goma) to the lands of Masisi (up North in Nord Kivu, quite a journey from Bukavu!) to meet Laurent Nkunda as ask him why, if he said that he desired peace, he kept on using the violence. “Do you think that the only way to protect the peoples and to achieve the peace is using weapons? Do you think that we can have peace while the peoples of Bukavu remember what you and your men did in 2004? Jolly is sharp, she is a good journalists and has the right questions. She is not afraid of finding the answers.

She is, without doubt, one of the boldest and best-trained journalists in Sud Kivu. She studied law at university in Bukavu and soon, when she was still studying at college, she began to work as journalist in the local catholic Radio Maria and since then she has seized multiple trainings given by UN agencies and media NGOs all over Africa and she has become an expert on legal issues&social justice pleas.

She has been the specialist of Radio Maedeleo for legal processes for six years, she writes in the radio´s journalist, she is a blogger (check it in www.kamuntu.wordpress.com), she colaborates with a French on-line journal (www.congoblog.net) as a correspondant in Sud Kivu, she collaborates with the Dutch NGO La Benevolencija as a consultant to produce the radio shows on Social Justice and she is the president of AFEM-SK.

She finds time to polish her nails, collaborate with Spanish blogs, take care of her children, train rural women on journalistic techniques in the frame of AFEM´s activities, meet the rural members of AFEM and meet with me to take to show me the newsrooms where she works.

The radical stregth of this Congolese journalist tells us about the incredible task that these women are slowly accomplishing; she is now pregnant, but no one has been able to persuade her to stay in the city, where things are calm.

“Could everyone stay arms-crossed?If everyone shuts up who is going to denounce what is happening?” She states that she has to keep on going, even if she is unpaid, or doesn´t get enough sleep or if she has a little baby, because she has been trained to do it.

No words. No words to describe her. No words.