Originally hailing from Orange County, California, Ryan is finishing his final year as an undergraduate student at the University of California, Riverside. He is a public policy major with concentrations in both foreign policy and policy processes. During his studies, he was involved in the Adversity and Adaptation Lab as a research assistant as well as a current committee member of the Highlander Action Committee, a student advocacy organization. He was interested in working for The Advocacy Project in order to help spread awareness of unheard voices around the world. His interests include running and cooking.


History does not repeat, but it does rhyme. 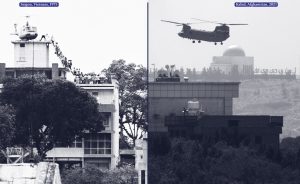 Gunshots ring out in the air. Men, women, and children clamor at the gates of their capital’s last airport begging for safe passage away from the oncoming enemy army. US troops attempt to control the crowd but some manage to make it onto the runway to stop planes from leaving. Some even cling onto planes as they fly off, falling later on. When one of these behemoth planes carrying hundreds of fleeing civilians attempts to land, the crew notices a body stuck in the right wheel well of the aircraft. Another victim was caused by the mass confusion and hysteria at the airport.

However, the trauma does not end there. Knowing the Taliban, we should not trust that they would not retaliate against those who collaborated with the US-led coalition forces. Taliban forces have already begun targeting interpreters that worked with US forces. Though the Taliban say that they will not seek revenge on collaborators, this seems nothing more than appeasement to the US while they evacuate. If the Taliban were earnest in this regard, they would not feel the need to set up armed checkpoints to screen and harass collaborators.

To some Americans, especially those of the younger generations, these scenes of fleeing Afghan civilians are shocking, terrifying, and unheard of. To the millions of South Vietnamese that fled since 1975, this was a reminder of the fleeting days of their own country.

South Vietnam had a similar situation. The government was propped up by the United States and was greatly assisted by the US and allied forces in combating their own insurgency. When the United States withdrew in 1973 after 8 years of major combat operations. The United States had spent a considerable amount of time training the South Vietnamese forces and made deals to continue supplying their military. However, the South Vietnamese Army, the Army of the Republic of Vietnam (ARVN) faced similar corruption problems as the Afghan National Army (ANA). Alongside other factors such as Communist support from China and the USSR in the region greatly increased while American support decreased. Eventually, the south would fall in a major offensive, leading to its eventual collapse on April 30th, 1975. Due to fears of retaliation, leading to waves of refugees known as “boat people”.

Similar to what happened in South Vietnam, the world should expect a refugee crisis even larger than the Syrian refugee crisis a couple of years ago. The United States should move forward with evacuating as many refugees as possible and setting up a process for these people to find new homes. It is appalling how disorganized the current situation is but the United States can make up for it by doing what we can now. The past is in the past and the rest of the country has fallen. We at least owe it to those who have made it to Kabul to assist. It will not be easy, but if the United States seeks to remain a beacon of hope, it must utilize its vast political and economic resources to assist in the oncoming refugee crisis.