Caroline Risacher (Association for the Defense of Azerbaijani Political Prisoners in Iran- ADAPP): Prior to her fellowship, Caroline worked as an International Coordinator at the University of Strasbourg; volunteered in La Paz, Bolivia, for the Bolivian Express magazine; worked for One More Option, a NGO based in France and Ecuador that helps disadvantaged children; and interned at the Institute for the Study of Human Rights at Columbia University. Caroline graduated from the University of Strasbourg in France with a Masters in International Relations and European Affairs and a Masters in Human Rights Law with a specialization in Minority Rights.

I realize that I should probably start with the beginning and give some precisions on the general situation of the Azerbaijanis and Iran.  It was confusing for me at first when I was talking to Azerbaijanis from Iran and they would refer to their home as “Azerbaijan” or say that they spoke Turkish and were Turks.

First, it’s important here not to confuse The Republic of Azerbaijan at the North of Iran that was part of the Russian and then Soviet Empire for 70 years, also referred as Northern Azerbaijan, with the Azerbaijani part of Iran – Southern Azerbaijan – from where the people I’ve met all came from. Basically, Azerbaijan is divided in two; the Republic has approximatively 9 million inhabitants while the Iranian part has about 20 million inhabitants. This number is especially important considering that Iran has a population of 78 million.

The Azerbaijani region of Iran is located in the Northwestern part of the country. They refer to it as Azerbaijan  and speak Azerbaijani Turk.  They are Turkic people and share a similar language and ethnicity with the people of Turkey. When you are in the Azerbaijani region, pretty much everyone speaks Turkish, except for government officials who speak Farsi as it is the only official language of the Islamic Republic of Iran.

Concerning religion, the majority of Azerbaijanis are Shia Muslims, but a minority within the minority exists; some are Sunnis, but other faiths exist such as the Ahl-e-Haq. Needless to say, they are doubly discriminated because of their different religion and ethnicity. 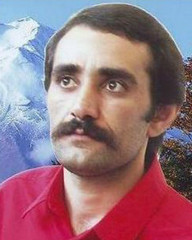 Physically, the Azerbaijani people can’t really be distinguished from Iranians, looks vary, hair can be dark or fair, eyes can be brown, green, blue… There really is not a dominant phenotype.

I mention this because it’s important to understand that the only thing that can differentiate an Azerbaijani from an Iranian is the language; religion, looks, food are almost the same. That is a strong point for a government that has relentlessly tried to assimilate and annihilate a culture for the last 90 years. However, one can’t and shouldn’t underestimate the power of language and the importance for people to be able to express themselves in their own words.

Indeed, the Iranian government follows the concept that Iran is “One nation, one language, one country” and that unity is the key to progress and modernity. Farsi (or Persian) is the one official language.

Let’s mention other minorities of Iran: Azerbaijanis are the biggest group but there are also Arabs in the Southwest, Baluchis, Kurds, Lur, Turkmen and more.  We can estimate that less than half of the population of Iran speaks Persian as their mother tongue.

However, what I’m interested in today is not in showing how “evil” the Iranian government is, but to understand how it could possibly have been a sustainable model for the last 90 years. I’m not sure it’s sustainable in the future, but so far, they did manage to get a racist ideology across the population and even if they couldn’t suppress the Azerbaijani language, they have undeniably hurt it.

A little bit of history is required here.

Historically, various different ethnic groups have populated the territory that is now Iran. Cyrus the Great, Turks, Arabs in the 7th century, Mongolian invasion in the 13th century, Persians; all of this is part of its history. I won’t get now into the details of what happened before the 20th century, but they are important, not because of the events per se, but in the way that they have been and still are exploited. Who was here first 5000 years ago: Turks or Persians? This are very interesting debates but the fact is Iran is a multi ethnic country and has been for a very long time. Minorities weren’t always discriminated against and different cultures were respected. Indeed, once upon a time, Iran was called: “The Protected Countries of Iran”.

Everything changed in 1925, with the Pahlavi regime who used the modern European theories of Aryanism to justify the domination of the Persian elite. Apparently, according to the doctrines in vogue at the end of the 19th and beginning of 20th century, Persian is an Indo-European language and Aryans, the superior race, came from India and Iran, or something like that…  Obviously, Aryanism is a racial construction whose original purpose was to distinguish the Indo-European group as a different and better race than others (Turks, Jews…).  This is a quick overview of the Aryan theories; I could probably make a whole post on those theories, silly as they are, but Fars still see themselves as Aryans and believe firmly in their superiority.

To summarize, the Pahlavi regime, which gained access to power thanks to the British who could control them, forbid the use of all languages other than Farsi. They changed the name of the country from Persia to Iran in 1935 since it reflected better its Aryan origins, and instituted a dictatorial regime allowing no space for diversity and promoting the greatness of the Aryan race.

In 1979 happened the Islamic Revolution. Things got slightly better for minorities but barely. They kept the ideology and propaganda against the ethnic minorities. 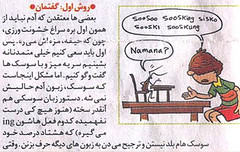 Now, in the age of internet and mass media, it seems increasingly harder to hide the injustice of the system. On May 12 2006, Iran Newspaper, an official magazine, published a cartoon with an article where Azerbaijanis were identified as “cockroaches” who “did not know the language of humans” and therefore had to be “exterminated”. Following this offensive publication, thousands of Azerbaijanis went to the streets for several days all over Azerbaijan, demanding equal treatment and justice.

This can be viewed as a turning point for the Azerbaijani movement and possibly marks the beginning of an awakening for younger Azerbaijanis. 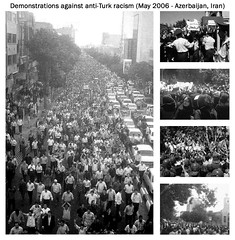