Barkedu in Lofa County, northwest Liberia, became an epicentre during the 2014-2016 Ebola crisis at one time. Between 300-500 Liberians lost their lives to the Ebola virus there. Some, due to lack of medical care, neglect or the inadequacy of the care that was available. Still others, due to negligence and myths that pervaded communities as the virus spread.

This week, I meet an Ebola survivor who today holds a top-level position in the National Ebola Survivors Network of Liberia. Hailing from Lofa County, our guest is a social worker; a feat he has practiced, as he told me since 2006. He at one time became a founding member of a group of Liberian psychosocial counsellors, the Liberia Association of Psychosocial Services, LAPS.

Our friend tells me today that Ebola survivors face myriad of issues, prominent among which are medical complications, economic and social issues. The same challenges we have encountered on this trail, talking to Ebola survivors as we learn first-hand how the crisis affected individuals and what it meant for those who contracted the Ebola Virus Disease during the outbreak.

Our friend lived and worked in Voinjama, Lofa County. Lofa is where Liberia’s index case of the Ebola virus disease occurred, after it reportedly spilled over from neighbouring Guinea. It was not the case that spilled over from Guinea that features more prominently in Liberia’s bout with the virus, especially in that part of the country, it was a case that travelled from Sierra Leone to Monrovia, the nation’s Capital and headed to Barkedu, Lofa County, as our friend tells me, that had really fatal consequences for the community, county, and the country.

Our friend in this interview, and his family were at the center of this outbreak, what became known as the second wave of Ebola virus disease outbreak in Liberia. 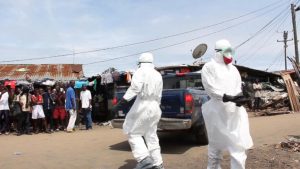 Our friend narrates: “I lived and worked in Voinjama, at the time, as a social worker and a community mobilizer. I was active during the time of the initial outbreak, and I was in charge of mobilizing community dwellers to identify and isolate suspected cases of Ebola and supporting communities in Voinjama link suspected cases with the Ebola Response Team in Voinjama.”

“My brother and this our female relative arrived in our village and my mother was among several villagers who provided alternative (home) care to these two, sick people. Unfortunately, my brother and the girl died. And all those who came in contact with them and provided care to them also felt sick and started to die one after the other. When I heard that my mother had come in contact with the party, I knew that something was going wrong, so I immediately travelled from Voinjama[1] to Barkedu to get my mother and bring her to the hospital in Voinjama.”

“At the time as the virus was spreading, so was the myth that the crisis was a ploy by the Government to sell human kidneys to some foreigners who were in the country to purchase kidneys for hefty payments. This myth had spread very widely across Lofa County and in my village. Genuine efforts to save lives were resisted. My mother was also fed with this myth. Howbeit, I convinced her and took her from the village, Barkedu, to Voinjama so she could receive early treatment at the Ebola Treatment Unit (ETU) at the time. She was very uneasy. She had been told that people entering the ETU were not returning alive and that she would not return alive; and that there were people in the ETU who were extracting kidneys, and this is where I had brought her so that her kidneys could be extracted since I had already received payments for her kidneys. My mother believed all this.”

“When she entered the ETU, I was away for some minutes on an errand to get some materials including feeding utensils for her as the health workers had advised me. Upon returning, I saw my mother running from the ETU and shouting that they were about to extract her kidneys so she could not stay at the ETU. She had tested positive for the virus. The health workers did not restrain her and instructed that nobody touched her. I was surprised at my mother’s reaction. I asked her, is going back to the village what you want? She answered, “Yes.” And away she went on a commercial motorcycle along with another relative.”

“The motorcyclist that drove my mother to the village died of the virus which he contracted through my mother. The relative who rode with my mother died as well. I returned to the village. My mother reported me to the community and to our family leaders that I had accepted payments from strangers in exchange for her kidneys, and had taken her to the Ebola Treatment Unit in Voinjama so that her kidneys could be extracted.”

“Such was an abominable offense, and if I were to be guilty of her accusation, my family would banish me for life. The family leaders investigated. They found that I was not guilty; but asked that I apologised to my mother; which I did. My mother was becoming very sick and family members provided care for her. All those that cared for her, could no longer listen to my advice. They no longer trusted me. But I knew they all would die, and they did die, sadly.”

“I asked a local health worker to teach me how to provide basic care including using intravenous drip and giving injection so that I could care for my mother. I did not want to put this worker at risk. I preferred to care for my mother even at my own peril but not allow another person to suffer for my mother’s own disbelief.”

I implemented the protocols[2] as advised by the Ebola Response Team. I did not have hand gloves. So, I used plastic bags and chlorine solutions to protect myself and decontaminate each time I interacted with my mother. The home care was not good enough. My mother situation worsened, and she passed off. Our village lost between 300 and 500 persons due to this particular index case who was my brother, through whom my mother and other villagers contracted Ebola. I too contracted the virus through caring for my mother and spent 23 days in the Ebola Treatment Unit. I was discharged on July 25, 2014.”

[1] Voinjama is the Capital of Lofa County

[2] During the crisis, health workers advised that those who were caring for EVD suspects at home should use chlorine solutions to decontaminate and plastic shields if they have to touch EVD patients.