How to Become a Naike 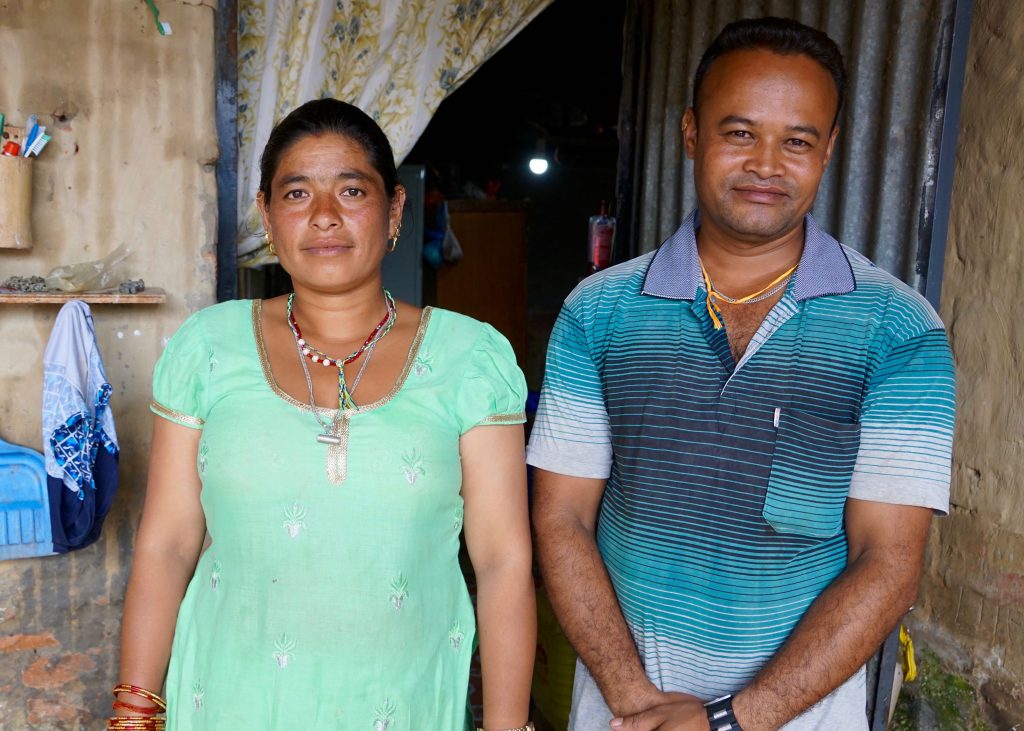 During the dry season, when the brick factory is in full flow, Nabaraj supervises the section of workers producing bricks. For 10 bricks produced, one brick is for him. (Bhaktapur/Lara Cerosky)

As a child, Nabaraj wanted to become a driver. Today he is a naike. Every spring he is hunting for possible brick labourers to work for his factory once the brick production season starts, from October-November to March-April. Swet Bhairab is one of the largest, and most secured brick factories of Bhaktapur Valley. About 300.000.000 bricks are produced in one season, by more than 1000 labourers who mostly live within the factory located in the village of Phaidhoka.

The role of a middleman

“Naike” is the Nepali word that designates the kind of middleman that is managing the relation to the brick factory workers and their working conditions. The labour within the kilns would be a single chaos if there were not a few naikes that supervise the work forces. For every production stage there is a different naike in charge of the labourers, that ensures the quality and rapidity of the work. From the very beginning with mixing mud, until the end with carrying dry bricks to a storage area, there are as much naikes as the brick production process has steps. 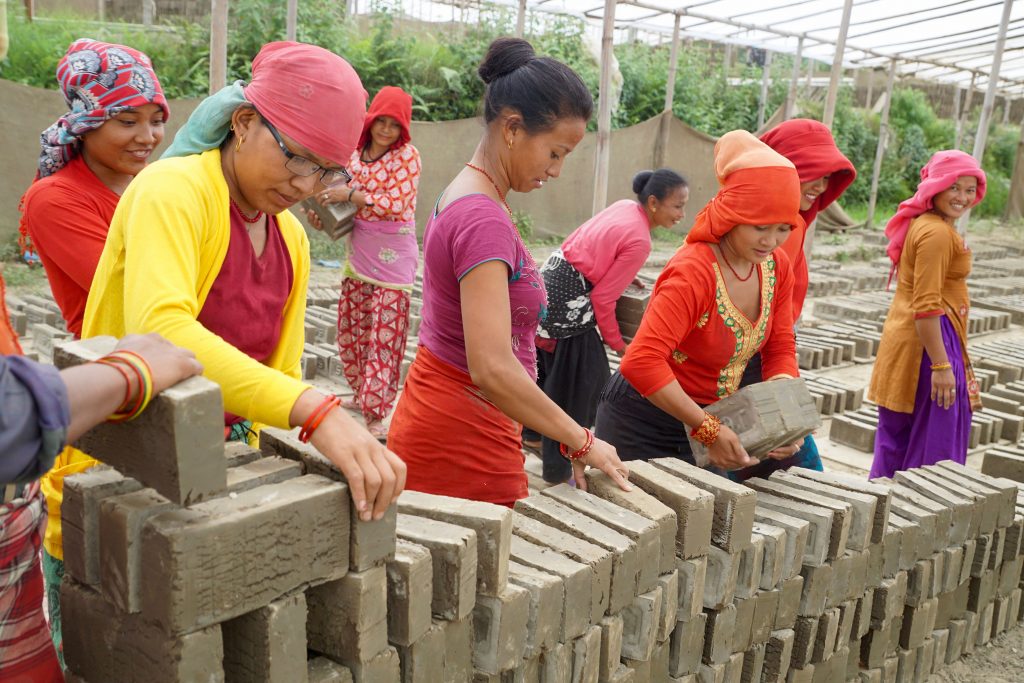 Piling bricks while making sure they are evenly spaced, in order to make them dry faster, is a task that falls to women and children. (Bhaktapur/Lara Cerosky)

A naike has many responsibilities in a brick factory. As such, he is not only supervising the workers during the brick season, but also in charge of recruiting labour forces for every new brick season start. From April to June, naikes are traveling to villages from Ramechhap district, to seek for single workers or whole families to come to work to the factory in Phaidhoka. Once Nabaraj receives the yearly recruitment amount of 25 lakh (1 lakh is 1 hundred thousand rupees, or around $1.000) to be shared between possible recruits, he takes one of his foldable electric bikes and goes to Ramechhap. It is a two hours drive to the villages where he can usually quickly convince possible labourers to work for him. It is not difficult for him to persuade villagers who are mostly living in poor conditions and who get completely dazzled by the rupees that Nabaraj is providing to those that promise to be future labourers, as an advance of the season’s first salary. The temptation of immediate consume these rupees are generating, attract many people that are dreaming big, have children to feed, or simply have debts to reimburse. Usually Nabaraj is lending about 1 to 3 lakh to a worker in return for a working promise in the kilns for the upcoming season. To ensure these possible workers will really show up at the factory, Nabaraj is collecting their citizenship card along with a contract on which the worker signed with his fingerprint – the villagers being most of the time illiterate, even though illiteracy dramatically decreases with the new generation of young adults. However, this precaution is not an ultimate protection for the naike and Nabaraj already experienced a few times the embarrassing situation of losing millions of rupees entrusted by the brick factory owner. It is not uncommon that some recruits disappear with the money and never show up again. 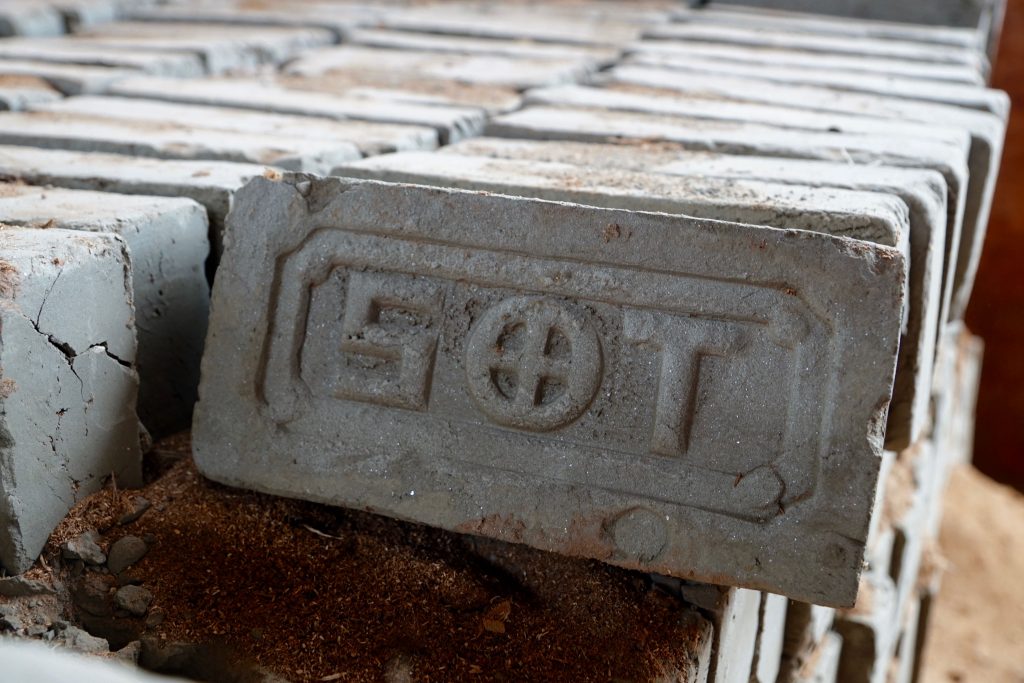 Every brick factory has its own acronym that is affixed on all the bricks produced in the kilns. (Bhaktapur/Lara Cerosky) 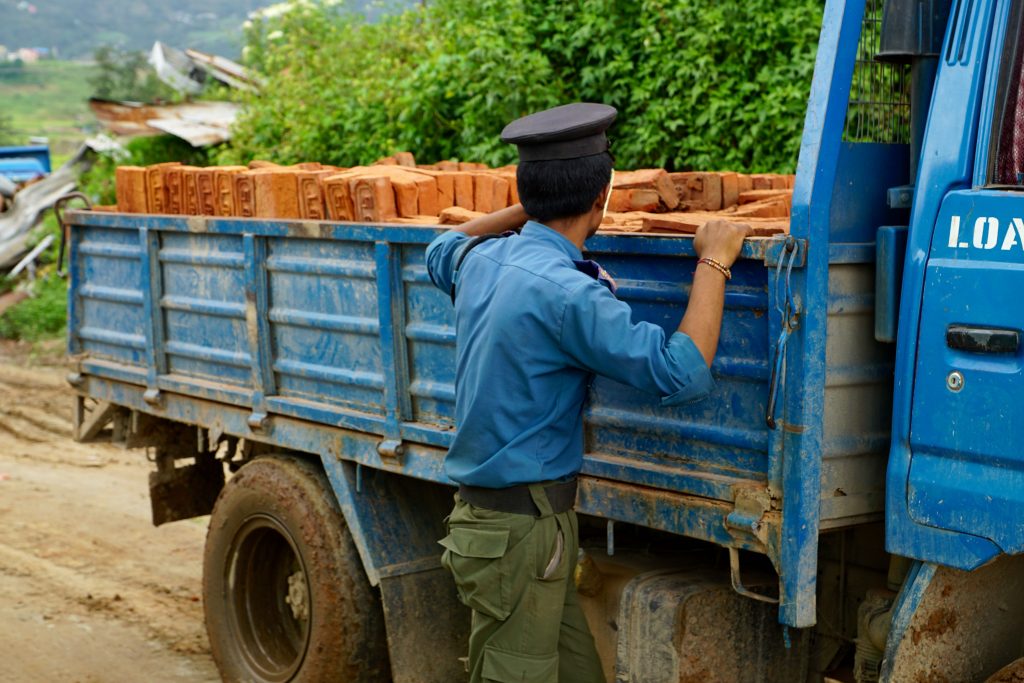 Security is controlling all vehicles and visitors coming in and going out of one of the largest brick factories of the region, Swet Bhairab Factory in Phaidhoka. (Bhaktapur/Lara Cerosky)

A career in the kilns

Nabaraj and his wife Ganga Maya have also been recruited by a naike 20 years ago when they were living in the village of Koahla in Ramechhap. Instead of the hundreds of thousands provided today, he was attracted with a few thousand rupees, that he reimbursed within a period of two months. For 3 years, they travelled to the kilns for every season start. They eventually decided to stay in Bhaktapur to enable their children to go to the same school during a full academic year. Both were simple workers for years, and after 12 years of hard work, Nabaraj was finally promoted to a naike. To achieve this status, the most important is trust. According to him, the brick factory owner needs to trust the possible naike since years and only the combination between seniority in the factory, hard work and reliability increases a worker’s chance to be chosen by the brick factory owner. It is all about trust insisted Nabaraj. 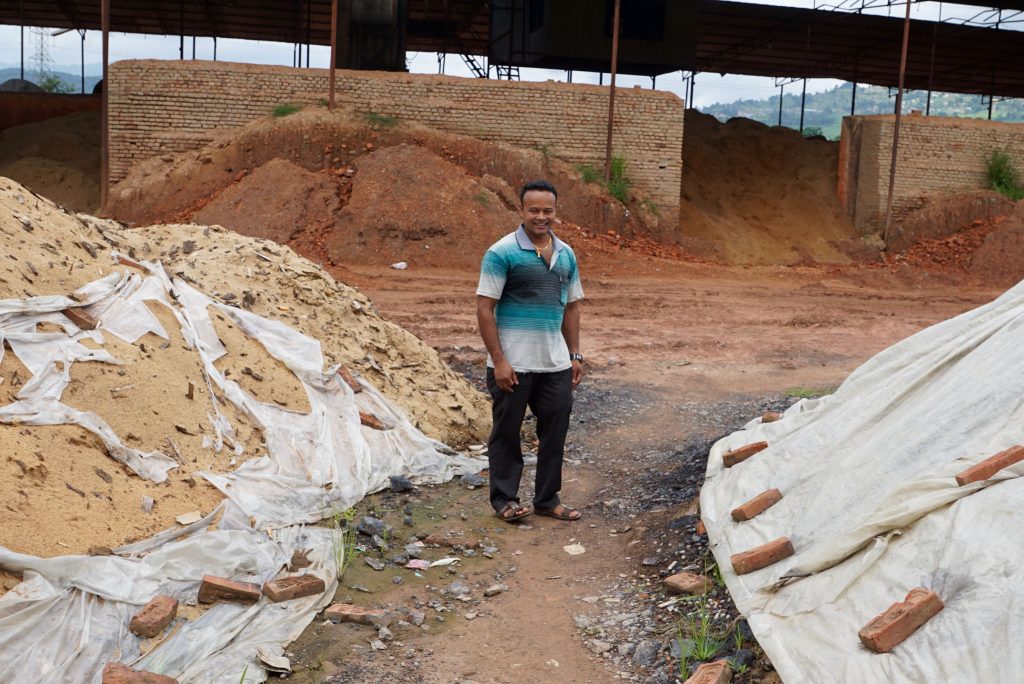 Nabaraj is one of the 5 naikes supervising the workers in Swet Bhairab Factory. He is in charge of the brick making stage, the most important step in the whole brick production process. (Bhaktapur/Lara Cerosky) 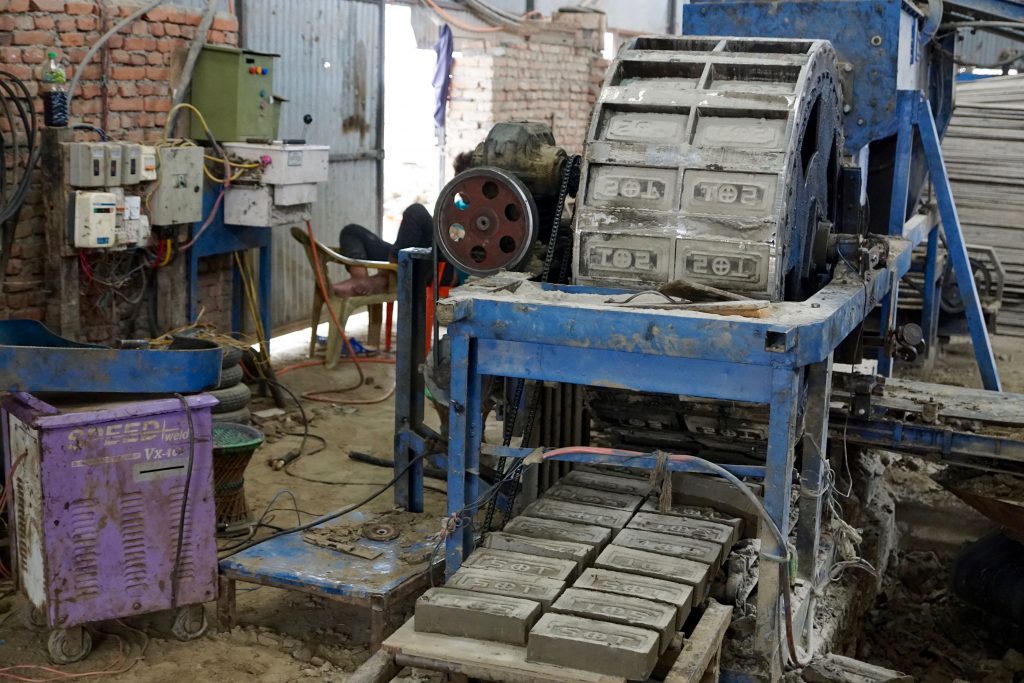 Most of the brick factories are running 6 months of the year, from October to March, when the dry season begins. Swet Bhairab Factory is one of the few that have a machine producing bricks during the rainy season, therefore the brick factory is open all year round. (Bhaktapur/Lara Cerosky)

The difference between a simple worker and a middleman is striking. Entire families work for as much as 16 hours a day, for a salary of one rupee and a half for every brick produced (17 rupees is the fixed rate for a brick at the very end of the production process). Nabraj proudly explained that his wife and him can afford not to work anymore, because from 10 bricks produced by the factory’s workers, one brick goes to him, free of charge. And exactly here lies the problem. The equation is simple: the more bricks are produced by workers, the more money the naike is receiving. A couple needs in average one month and a half to produce 90.000 bricks, earning about 1 lakh, resulting in free 10.000 rupees for the middleman. Nabaraj said that when parents are making two of their children to work, they only need one month to finish the 90.000 bricks. This becomes particularly tricky when is calculated the considerable financial benefits a naike is having from letting children work with their parents. 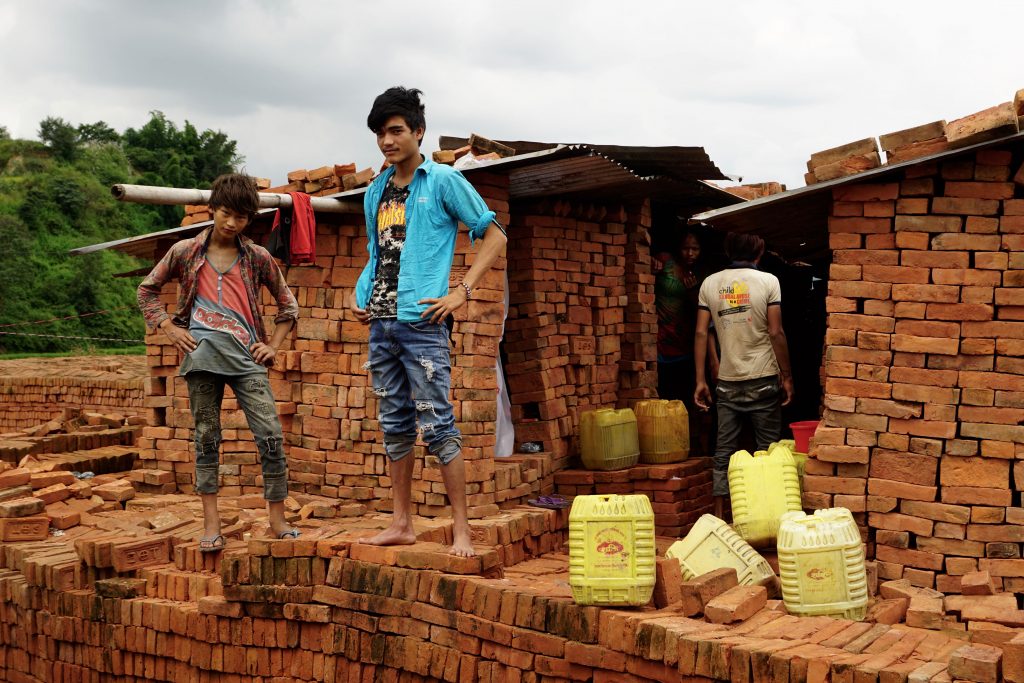 Brick labourers mostly live within the factory, in own houses that they are building at the beginning of every new brick season. (Bhaktapur/Lara Cerosky)

Naikes are not only crucial for the smooth running of the brick factories, they are also key actors in the fight against child labour. Because they are the decision-makers during the recruitment process, they have the power to ensure that either only adults are hired, or if families with children get employed for the upcoming season, they can ensure that parents understand and agree that it is forbidden for them to make their children to work with them in the kilns. Because the middlemen are also in touch with families on a daily basis, they know what binds the family to the factory, what are the reasons behind making their children to work, or if there are any debts to reimburse to a third party. Because naikes are monitoring the parents and children, they know the working schedules of children, their tasks, their difficulties at school and in the kilns. Because they are the first ones who will be informed in cases of migration, of school dropout, of any difficulties the family is facing, their collaboration in programs aimed at rescuing children from brick factories is necessary. Through their knowledge of the ground and their relationship to the families, their help in assessing the main challenges or successes of a program such as the 50 Children Program is of great importance. 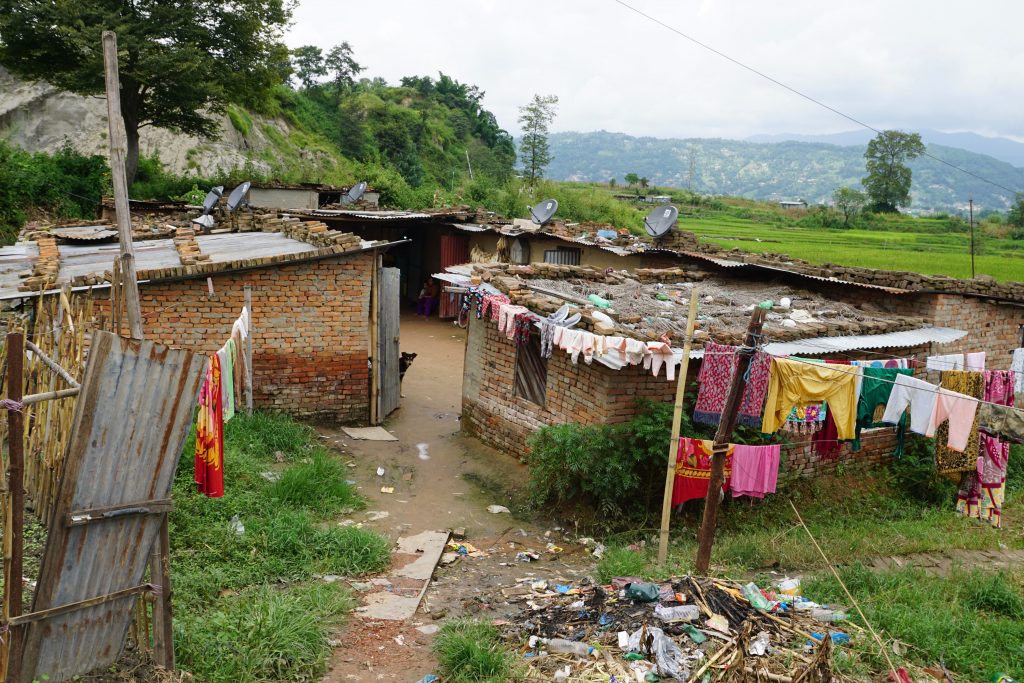 Naikes live with their families within the factory, as do most of the labourers. Even though their housing seems precarious, they live in luxury compared to simple brick factory workers. (Bhaktapur/Lara Cerosky)

However, since the naike lives from the family’s brick production, either he understands that child labour is against the law and that it has to be banned completely and definitively from brick factories, or he must be given incentives for him to support families not to make their children work anymore at all. Given the high rate of children who are working in factories, middlemen can not be the only ones controlling the kilns to ensure a child labour free factory. This situation can only occur if brick factory owners and naikes, along with schools and organisation, work together hand in hand to eradicate child labour in the brick production sector. A naike is such a precious asset that his role needs to be integrated programs aimed at fighting child labour in brick factories. Without the middlemen, breaking the circle of child labour within the kilns seems to be very very challenging. 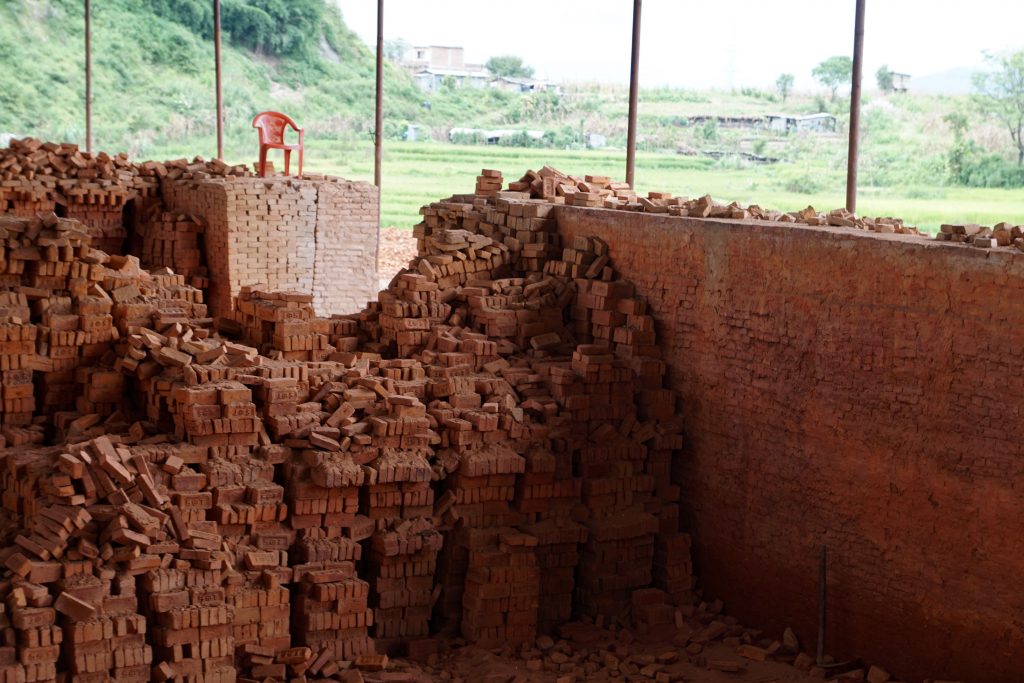 Once bricks are completely dry, they get burned and lose their typical mud-grey color for a strong and luminous rust-colored aspect. (Bhaktapur/Lara Cerosky)