“We are a people. A people does not throw its geniuses away, And if they are thrown away, it is our duty as artists and as witnesses for the future to collect them again for the sake of our children, and if necessary, bone by bone.” –Alice Walker

It has been a little over a week since my return from Peru. As I had previously mentioned, in my time there, I recognized what I felt was a clear division between those who are determined to forget Peru’s violent past and by those who are fighting to remember. Within my last few days in Peru, that divide materialized through two pivotal events. As I was packing to head North, most of EPAF’s staff had already headed to Peru’s Southern department of Ayacucho, in order to prepare for the event of “Art for Memory”. EPAF had collaborated with students, artists, and human rights organizations in preparing for this exhibit where various art works in memory of Peru’s disappeared would be displayed. The exhibit was meant to re-visualize Peru’s 15,000 disappeared through different art mediums within Ayacucho, the region that was highly impacted by the violence. A week prior I had gotten a taste of what works would be exhibited in my attendance at a week of events devoted to discussions on memory titled “Debates Por La Memoria” at San Marcos University. The events were organized by EPAF and Taller de Estudios sobre Memoria Yuyachkanchik to both commemorate the 7th Anniversary of the final Truth and Reconciliation Report and in honor of the International Day of the Disappeared. 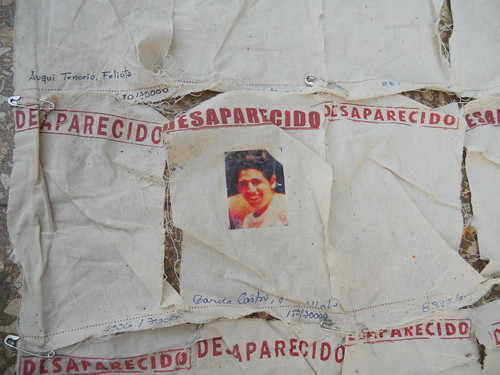 In this week, devoted to remembering, I had attended the screening of documentary film, ‘Chungui: Horror Without Tears’, which tells the story of cultural anthropologist, Edilberto Jimenez, after his first trip to the small town of Chungui where an estimated 1,300 people were killed between 1983-84 alone. As victims of both Shining Path and the armed forces, this film follows Jimenez in his journey in gathering these survivors’ testimonies which he then visually recreates through detailed illustrations. As a retablito (maker of boxes with modeled figures inside) Jimenez creates 3D figures that shake the core of the viewer. Since Quechua is typically not a written language I found Jimenez’s strategy to preserve memory as an effective way to chronicle the memory of those they lost, without forgetting the violent past. I also marveled at the ability of even the most horrific scenes possessing their own nuanced beauty through Jimenez’s visionary recreations.  Creativity was also present in the works of student artists at San Marcos.

As for the art works that I were exhibited in San Marcos, each one, was politically charged in that they were meant to be used as campaign tools to raise awareness on the disappeared. Amongst them was a large ‘carpet’ comprised of 15,000 panels that each had the names of those who were registered as disappeared in Peru. The carpet, I was informed, was designed to demand attention through its size and to obstruct the path of the passer by and by doing so, forcing the viewer to witness the visually abrasive sum of those numbers. 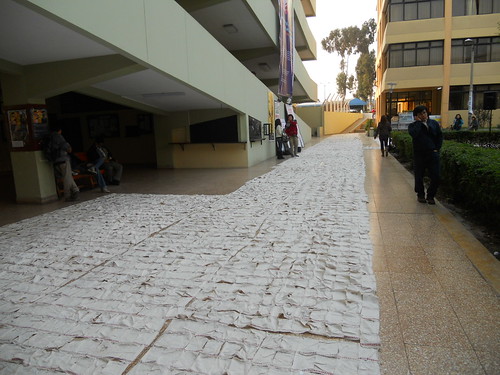 Arte-Correo (Mail-Art) “Pitando por Memoria” (Painting for Memory) on the other hand, took a more personalized approach and much like the Scarf of Hope, its success was reliant on the participation of the family members of the disappeared. They were asked to visually recount what their missing family members were wearing the last time they were seen and then filling in the empty human figure. 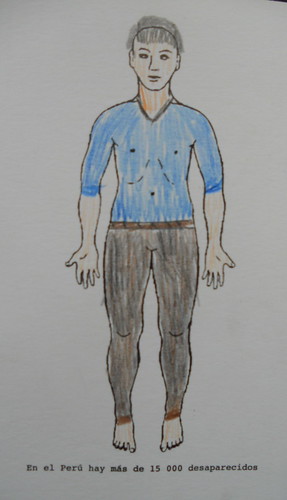 The image on the template of the Arte-Correo is used in the antemortem data collection of forensic investigation, when investigators are conducting interviews with the family members, and collecting evidence that would help them identify human remains. The Arte-Correo is not only intended to put a face to the thousands of statistics that the disappeared have become, but also to circulate these now personalized images through postal mail.

The second pivotal moment that merits special attention, was Peruvian President Alan Garcia’s passing of Legislative Decree No. 1097. This decree placed statute of limitations to human rights crimes committed during the country’s internal armed conflict 1980-2003. This decree would have meant that any investigations on human rights violations that occurred between 1980-2003 would be suspended, forensic investigations would no longer be given legal permission, and regulations would have provided conditional liberty for those who are currently being prosecuted for human rights violations, including torture, forced disappearances and extrajudicial killings. To learn more about the specifics of the decree, read here, or to hear an interview with Professor of Political Science at George Mason, Jo-Marie Burt, click here.

However, what accompanied this executive order was also a flood of protest within civil society, both in Peru and with the involvement of the international community. Organizations Asociación pro Derechos Humanos APRODEH, Amnesty International, Equipo Peruano de Antropología Forense, and La Asociación Nacional de Familiares de Secuestrados, Detenidos y Desaparecidos del Perú – ANFASEP, among many others, joined the public outcry at this decree, that if passed would have ensured impunity. Notorious Peruvian writer, Mario Vargas Llosa, recently thereafter, wrote a letter that said he was resigning as director of the Museum of Memories because of the decree, which he wrote was ‘amnesty in disguise’ for human rights violators. The Museum of Memories are devoted to maintaining the memory of the atrocities committed during the conflict by all perpetrators of the violence as a historical reminder that ‘Nunca Mas” (never again) would conflict escalate to that level of violence in Peru.  In response to these waves of protest (along with a vigil in front of the Palace of Justice in Lima) Congress annulled the decree keeping it from taking effect. To learn more about the decree being revoked read here. 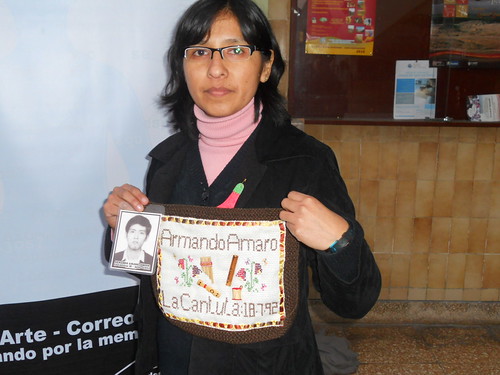 The debate over this decree of impunity was symbolic of the battle between impunity and human rights, as if implemented it would have kept victims, from even possessing the possibility (or the hope as I had mentioned before) of attaining justice for the forced disappearances of their loved ones. And so, in my final hours spent in Peru, the determination of survivors to fight for justice overcame that risk towards impunity, and even as I landed far North of Peru’s beautiful vast Andes, away from the hidden communities that one might otherwise think were forgotten, I was reassured that social unrest will always keep Memory alive, until conditions permit them to properly bury their past, even if necessary, bone by bone.