I hesitated to write this blog

I hesitated to write this blog. I questioned the ethics of even taking the photo, first asking my colleague what I should do and then for permission. When I travel I rarely take photos preferring instead to capture the experience and not infringe on others. In NGO work, however, photos are a key component.

Needless to say I am still unsure about sharing this story. I don’t want to take advantage of the situation of a person with a disability in a desperate situation. With the boy and his community perhaps questioning why this muzungo (foreigner) came yet nothing changed or even worse that I gained somehow from the interaction. However, my goal in sharing my interactions with this boy is to raise awareness for PWDs in Gulu, which hopefully can in some, however small, way make a positive change.

As part of the schools assessment GDPU and AP are completing in Gulu District, I meet with several District Education Officers. When describing the research I asked the officers if there was any school in particular we should visit. It was then my attention was turned to to a rural school which had a boy in primary five using a wheelchair. The officer told the research team that while there was an accessible toilet for the boy but it had fallen into disrepair. As a team we decided it was important to visit the school.

When we arrived at the school they said the boy was not in class because the heavy rains made the mud too thick for him to come to school. We explained that we wanted to discuss with him the water and sanitation situation as part of our overall needs assessment. The headmaster told us we could go visit the boy at his home, which was nearby. When we arrived the boy, named Dennis, turned out to be more so a young man than a man, and in approximately his early 20s. The headmaster explained that in actuality no one knows his age, but they just put 17 on school documents as students over 18 are not allowed to be enrolled in that primary school. The boy wore a muddy hooded sweatshirt and shirt. The headmaster translated that he told him he did not have a shirt was for the painfully simple reason, that he has no sap with which to was it. His small hut, where he lived in alone, was constructed from little more than plywood, wooden posts, and a thatched roof. It stood without a door, allowing us to peer inside at the absence of any furnishings or bedding.

I, was both eager and concerned, to find out if he was going to school and ask about the latrine situation at school. From discussions with Dennis, the boy, he had not been to school at all this term and last term he was often absent. From conversations with the boy and the neighbors, his family had left for an undermined amount of time and his sister had locked his school uniform in her hut for reasons we were unable to discern. He was getting by on generosity of his neighbors who brought food to him.

I wouldn’t consider myself sensitive, or squeamish in matter of development, having traveled extensively in developing countries, but the living conditions of this boy left an impression. The entirety of possessions amounted to the clothes on his back and the straw roof over his head. When services don’t exist, when parents believe disability is a curse, PWDs will continue to be marginalized and neglected. I remain skeptical towards this blog. I hope that by posting Dennis’ story it may serve as a small catalyst for support and growth in disability services; and not be seen as an exploitation of his life. While the realities of his physical impairment cannot be changed, perhaps the condition which he, and many other PWDs, operate can be. 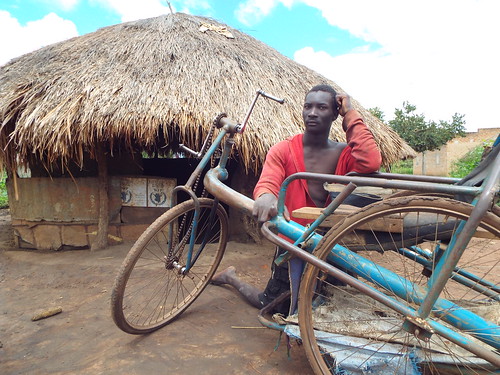