CEDAC is an umbrella organisation for former combatants’ associations led by the dynamic Eric Niragira, who founded the organisation with little more than a hope and a prayer in 2005. Although this is a period of his life about which he is reticent, Eric is himself a former combatant with the FDD, experience he brings to his work with CEDAC’s members, and after demobilisation he had the idea of founding an organisation in which former combatants from all sides could come together, promoting mutual understanding and reconciliation. Since he felt that former combatants were the most likely to restart the war, he saw this as a crucial step towards establishing peace. CEDAC now has 20,000 members across the country, working together in microfinance projects, support groups, and campaign groups, and receiving livelihoods training, something particularly important for former child soldiers, who have missed much of their schooling during the war. 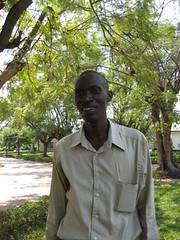 Survivor Corps will be working with CEDAC on their work on Gender Based Violence, where they seek to prevent Gender Based Violence by providing healing services and support to survivors, as well as attempting to tackle its causes by educating those who spread it as a weapon of war to become advocates against it. This work has many aspects; the ubiquitous support groups and microfinance groups, as well as provision of legal assistance (in collaboration with AFJB), but also campaigns to hand in weapons, and anti-GBV campaigns targeted at men and aiming to address views of women and definitions of masculinity that contribute to GBV.

CEDAC also works on a dynamic project, in which Survivor Corps will also be partnering them, in which they are harnessing former combatants to engage with other former combatants to promote peaceful elections in 2010. It is hard to overstate the importance of this; former combatants are involved in widespread violence and banditry across the country, are often armed, and are liable to take up arms when the political struggle goes against them. Almost every Burundian I have spoken to has told me that they are afraid of what might happen during and after the elections – but that the elections remain the focus of their hopes for peace. CEDAC are working on demonstrations for peace, the first to be held this Sunday, organising public meetings of former combatants to educate them on the importance of peaceful elections, and working the Radio Publique Africaine to produce radio programmes promoting peace. Many of their members are even standing as local candidates, promising to be conciliatory and moderate in their rhetoric. In line with Survivor Corps’ traditional focus on disability rights, they will also be campaigning for accessible polling stations.

I will be contributing to Survivor Corps’ work with CEDAC by profiling Eric and several of his members, drawn from different rebel groups, as well as some of the survivors of Gender Based Violence involved with CEDAC projects, and some of the former child soldiers in CEDAC training centres. I will also be helping Eric to develop CEDAC’s web presence, and covering events such as weapons collections and the demonstration for peace.