“An adaptor. All I need is an adaptor.” It’s getting dark, my body is aching, I’m feeling weak from hunger and fatigue and I’m making a racket with my suitcase rattling behind me on the metal footbridge at Canary Wharf, in London. People are giving me looks. I’m just hoping a shop with adaptors will magically appear in front of me, or perhaps more likely, an internet café, but everything is closed already. I look at my cell phone and realize that it’s already 8:34 and I’m supposed to meet Meijinder, who I’m staying with, in a half an hour. I had planned to sit in a café and write my first blog post for the fellowship training that starts tomorrow morning. Except that my computer ran out of juice. And, because London is only two hours away from Paris, I forgot that the British always have to remind everyone that they’re an island, even with their own “special” power outlets.

This summer, I’m going to Cali, Colombia as an Advocacy Project Peace Fellow to work with Colectivo Dignidad Humana, a member of the Women’s Network of IANSA, an international network of about 1000 civil society organizations working to reduce gun violence. A couple hours before my little hustle trying to find an adaptor, I am discovering the warm, friendly and busy IANSA headquarters in London a day before training starts. I have the privilege of sitting down for a quick briefing with the IANSA director, Rebecca Peters, who just travelled to Colombia a few weeks ago, and the Advocacy Project director Iain Guest.

Because NGOs in Colombia have been fixed on the war and opposition to Uribe, Colombia’s president, guns are only just becoming worth discussing in their own right, explains Rebecca. Many people don’t realize that the main cause of death in Colombia is not the war, but the use of guns in crime, including domestic violence. Statistics on the number of guns in Colombia and registered gun users are very hard to find, especially because the government considers guns a “military issue” deserving secrecy. As for domestic violence, there isn’t much reliable data either. Most victims don’t report it, for various reasons: they’re afraid, they don’t trust the police, they don’t know who to talk to or they think it’s a normal part of life. The general attitude is to treat domestic violence as a “private matter”. 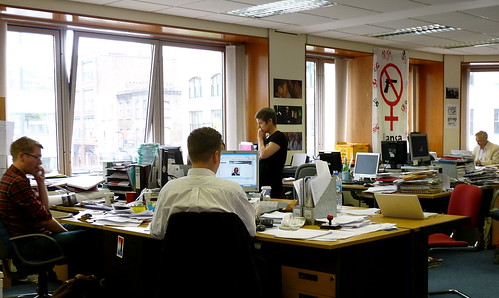 I’m one of nine AP fellows helping IANSA launch a new campaign called “Disarming Domestic Violence”. My job will be to collect information, stories and anecdotes, make video-interviews, take pictures and publish press releases on armed domestic violence in Colombia, which is currently not very well documented. This blog is a central part of my fellowship and one of the key ways in which I will help disseminate the story of Colectivo Dignidad Humana.

Why is it important to start a campaign on armed domestic violence specifically? In the home, guns not only increase the chances that a woman will die, but they are used to subjugate, intimidate, threaten and sexually abuse women. Guns also make it much harder for a third person to intervene and for a woman to escape. “A woman can run away from a fist or a knife, but not a gunshot”, explains Sarah Masters, IANSA’s Women Network coordinator.

It’s now Thursday night. I never managed to find an adaptor, but I was able to write this post on Meijinder’s computer this morning just before training started. After a very full day of training, I’m exhausted again, but very happy and excited to work with such a great team of people at IANSA and AP.