Introductions are in order…

Now that I’ve sat down with 13 of the 25 students I’ll be profiling, I’d like to start introducing a few of them to you. First are the students that Sundar and I interviewed in Imadol, Sanu, Buddhi and Deepak. Not one of them was over 11 years old, and yet they had more work experience than most college students in the U.S. 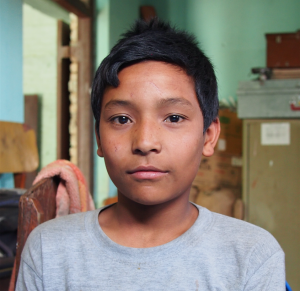 Sanu is very outgoing, but you wouldn’t be able to tell from his picture. He’s all smiles until he notices and camera pointed his direction then he switches to the subdued expression you see here. The serious expression is probably what you would expect from his history. From the interview we learn that although he is only 11 years old, he has already worked in the brick factory for three years.

Sanu comes from a big family. He is the youngest and has three older sisters and one older brother. He speaks fondly of his family and when he tells us that his father won a prize for carrying the most bricks last season the pride he feels is evident on his face. His brother is currently working at the brick factory also, even though he himself is only 14 years old. Sanu tells us that his brother broke his leg working in the kilns and that there was no money for a doctor or compensation from the factory. He explains his brother’s leg is healed now, but that it still causes him pain. This could just as easily have been Sanu’s future, but for the time being CONCERN is sponsoring his education allowing him to pursue his goal of becoming a pilot. 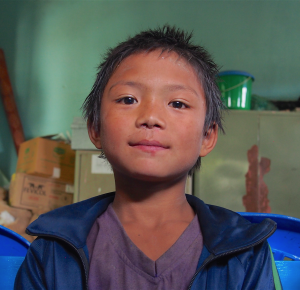 Buddhi is quiet compared to some of the other students. He was more timid during the interview as he explained his situation. At just 8 years old he has more work experience than some graduate students I know. He worked for three years in the kilns before CONCERN began sponsoring his education. By sponsoring his education, Buddhi is also able to take his 2-year-old sister with him to school so that she isn’t in the way of her parents’ work. He has two older brothers as well, one is only 13 years old. His brother dropped out of school in the third grade and has been employed in the factories since then. Buddhi’s favorite subject is English and after Sanu expressed his aim at becoming a pilot, Buddhi sweetly parroted this proclamation. 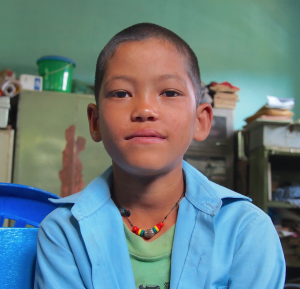 Deepak was the most serious of the children we interviewed that day. He does not have the high aims of Sanu or Buddhi. Instead he would like to be a driver and earn money. Deepak is only 10, but he has spent half of his short life working in the brick kilns. His father died in the Civil War in Nepal that ended in 2006 and with no other siblings, it is just himself and his mother.

I hope you enjoyed “meeting” a few of CONCERN’s students. I’ll have a few more introductions later in the week. Thanks for reading!