“It’s our right to know where they went.”

On 16th June 2002, youth activists Bipin Bhandari and Dil Bahadur Rai disappeared after being arrested from their homes in Kathmandu. On the same day 15 years later, families of the disappeared and missing, human rights groups and government officials gathered at the Attorney General’s office in Kathmandu for an annual event to pay tribute to their memory and honor their sacrifice through dialogue on the transitional justice context in Nepal today. The memorial event was coordinated and led by Eak Raz Bhandari, father of Bipin Bhandari and speakers offered a myriad of perspectives. The most prevalent viewpoint was a demand for the truth of the whereabouts of families and relatives. Almost 11 years later, relatives and activists were still asking questions about where their relatives were, unable to find peace and accountability for their loved ones. 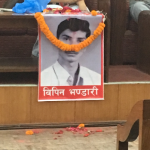 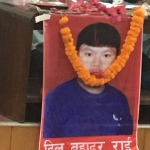 The People’s War in Nepal began in 1996 when the Maoists launched an armed rebellion against the government of Nepal with the goal of social transformation. The Comprehensive Peace Agreement signed in 2006 by the Maoists and government of Nepal ended the 10-year conflict and vowed to prioritize transitional justice including truth-seeking for those disappeared during the war. However, the two existing truth commissions; the Truth and Reconciliation Commission (TRC) and the Commission on the Investigation of Enforced Disappearances (CIEDP) were created over 10 years later. Although a commendable number of complaints have been registered and investigations are underway, both commissions have faced barriers to effective functioning including political interference, inadequate legal structures and victim engagement. The memorial gathering served as a platform for different voices and was an opportunity to discuss these pending issues.

Questioning legitimacy. Mr Eak Raz Bhandari commenced the day with the words; “What is the meaning of legitimacy?” He posed a loaded question in an attempt to challenge political leaders and the truth commissions to take action and implement policies towards justice, as well as restructure the TRC, in an effort to bring accountability. His poignant words and questions rang on to the crowd: “Is this a democracy, when will human rights be achieved?”. As the room listened, his words resonated and so did the need to address the social injustices that prevailed post-conflict. 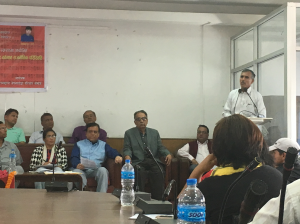 Shared Pain. A recurring theme throughout the afternoon, was the fact that victims had different backgrounds but shared the same pain. Victims’ networks in Nepal have often cited varying priorities. While some prioritize the efficiency of the TRC, certain groups are more focused on reparations, whether economic or social reparations. They however share a common pain and seek accountability and acknowledgement, an incredibly powerful force that has strengthened mobilization and activism. 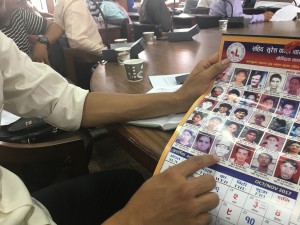 Prabal points to some of the missing from his hometown.

Truth vs, Criminal Justice. Mr. Lokendra Malik, chairman of the Commission for the Investigation of Enforced Disappearances, began by paying tribute to the victims of enforced disappearance, stating that “this was a great loss for the country”. He proceeded to make the distinction between truth and criminal justice, stipulating that there was a need to firstly find the truth and afterwards, segregate the cases for possible criminal prosecution. Searching for the truth about offenses committed can often be conflated with a desire to prosecute. However, Mr. Malik hoped to make it clear that the two were distinguishable.

“Let them work” –Mr.  Raman Shrestha, Attorney General of Nepal concluded the afternoon on an action note by urging attendees to let the truth commissions work, let them do their job. He further urged that families play a positive role and to help the commissioners achieve their hefty goals by giving recommendations and requests. 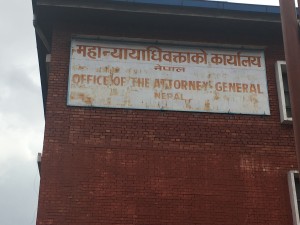 It was a particularly hot day in Kathmandu and as we walked home, I thought about the notion of victimhood. Enforced disappearances victimized those disappeared but also victimizes their relatives, long-term. The search for truth persists. It was the hope of the attendees on June 16th that the ongoing efforts of the CIEDP, as well as activists and politicians grant families their right to know the fate of their loved ones.

Read more on the memorial event for the disappeared on NEFAD’s Facebook page.