About a month ago in the Rautahat district of Nepal (south of Kathmandu in the Terai) a group of upper caste people blocked a Dalit woman from entering a temple, even physically assaulting her in the process. Later that month non-Dalit townspeople barred members of the Dalit community from entering the temple to get perform a marriage ceremony. The Dalit members of the town retaliated by attacking a non-Dalit and his wife, and that unleashed the fury of the other townspeople (about 100) who destroyed Dalit houses and lands. When the Dalits tried to intervene they were severely beaten and dozens were hospitalized. Reports came in from field reporters who stated that Dalit children had stopped attending school out of fear of what may happen to them if they showed up to class.

This is an all too common story in Nepal. In spite of a law that forbids caste-based discrimination, it is quite rampant. Incidents such as the one described above are common in the rural districts outside of Kathmandu, but even within the capital there are multiple instances of discrimination against Dalits. The law may forbid this marginalization, but it is ingrained in the structure of society and there are accusations that the police did not do enough to prevent this direct violence against Dalits in Rautahat.

According to the Republica newspaper in Nepal, around 15 NGOs working on Dalit rights held a press conference announcing a protest demanding justice for these Dalit victims in the Terai. I attended this press conference with two staff members from the Jagaran Media Center, Kamala, a radio reporter, and Shiva, JMC’s media coordinator. 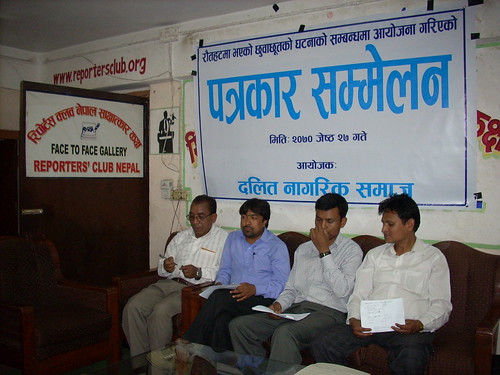 Rem, the president of JMC, was present and was quoted in several major Nepali newspapers this morning regarding the issue in Rautahat and the planned protest. The major concern is that there will not be enough Dalit representation in the new Constituent Assembly, and Dalit rights will be neglected in the new constitution. JMC is committed to empowering Dalit citizens to participate in Nepal’s fledgling democracy, and to hold politicians accountable to the Dalit issues and concerns.

This morning I woke up and went with Shiva to the planned demonstration. There were only a handful of protestors gathered when we first arrived, but more soon filled up the sidewalk. The police were out in riot gear and attempted to persuade the protestors not to block the entire street. The protestors were large enough in number that they succeeded in blocking the entire road for a couple of hours while they chanted slogans, heard a couple of brief speeches from Dalit community leaders, and passed around a petition that will be delivered to the officials in charge of the new Constituent Assembly election. 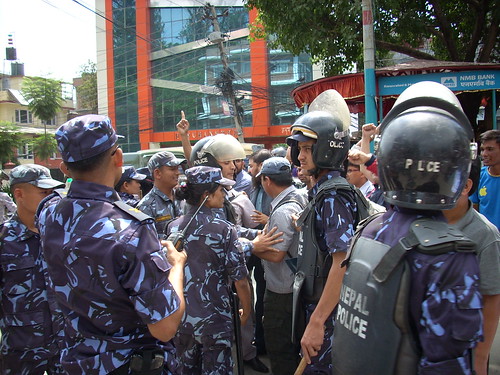 I spoke to one Dalit activist who told me that incidents like this were a sad reflection of the discrimination that exists in Nepal, but he felt that the Dalit organization, which includes the Jagaran Media Center, have done a fantastic job in bringing the issue into the public light. “More people are aware now,” he told me. There were definitely enough flyers distributed at the protest to inform the passers-by about what the issue was. We shall see if this will affect the status of the Dalit community in the upcoming election.