August 8: We had traveled throughout the night, and were in Janakpur in the east for journalism training. The JMC, sponsored by the Finnish government, conducts trainings for aspiring and established journalists. The aspiring ones are generally Dalits, and the goal is to get them working for the Nepali press, and hopefully be more representative of the Dalit cause in their reporting. While the media veterans are trained in social issue reporting, human rights, and Dalit awareness.

At this session, all in the room were non-Dalit media editors and journalists from radio, television, and print in the surrounding districts. The session began with introductory remarks by various leaders of journalism organizations, most extolling the importance of covering social issues and the ugliness of caste-discrimination in Nepali society.

Introductions followed, and each was asked to state how much they report on caste issues, and how important it is to them and their organization. The majority spoke confidently of their passion for the Dalit cause, and how frequently they reported Dalit stories – missing the obvious point that their mere presence in the room suggests that they are probably not, in fact, reporting Dalit issues. 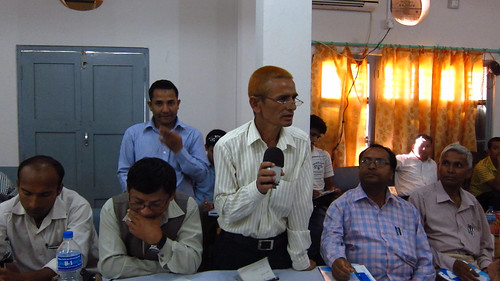 One reporter shared a personal story of frequenting a local restaurant, and only finding out some time after his first visit that the cook was a Dalit. At first shocked and appalled, he then realized that nothing had come of it – not death, not ailment, not torment, not bad luck, not metamorphosis into something awful. Since that momentous day, he boasted that his family had stopped practicing caste discrimination and held everyone in equal regard. That, is the plight of Nepal’s Dalits!

Finally, one young radio presenter shot up, and said the roundtable discussion seemed like a farcical Constituent Assembly (CA) member meeting to her – everyone saying they were covering the issue in question, one upping each other as the discussion went around the table, and not admitting any failings. Some smiled and giggled and blushed in quasi-agreement without protest, and an air of shame hung in the room as this proud and confident young woman continued in her reality-check. Bravo!

Breakout groups and discussions followed on how they could report Dalit stories more effectively, and what issues are not being reported. Presentations were made, and promises pledged that journalism would thereafter be more socially inclusive. 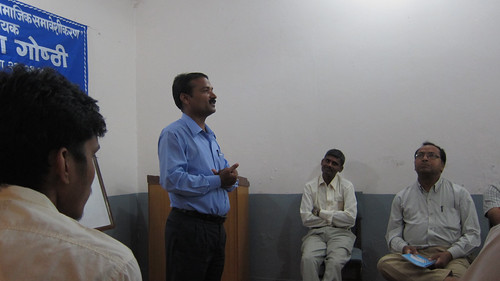 The day finished with Ramses Jha, the President of the Federation of Nepali Journalists (FNJ) of Dhanusa District, delivering a harsh critique on Nepali journalism. He laid bare to everyone that most Nepali journalism was lazy and easy, and mostly covered the political leadership (their every speech, move, event, press conference). These events and words and speeches are covered as is, while those who report it know full well it’s full of misinformation and lies. It’s a top-down leadership focused media, reporting on the easy stuff in city-centers. If this continues, the Dalits and other minority groups will never achieve equality. He finished by saying that real journalism is hard work, and that the most pressing issues are in the communities and villages, away from everybody’s gaze.

Next up, in the morning, was me, and my presentation on social media and its political power. More to come on that…