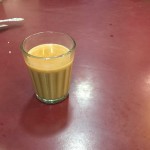 As Prabal, Kirstin and I walked to the bus stop after a meeting-filled day, Kirstin pointed out roasted maize on the street. In Kenya, we call it maindi choma and Prabal goes on to tell Kirstin and I that vendors in Nepal add a pepper-like spice to the maize which immediately reminds me of home. I once again exclaim that “Kathmandu reminds me of Nairobi”, a statement that I’m sure both Kristin and Prabal have heard enough of. By way of introduction, Kirstin is my partner peace fellow working with the Advocacy Project and Prabal is a graduate student at Kathmandu University, who has been working with NEFAD for the past two years and the first Nepali peace fellow. I haven’t been back home to Nairobi in a year now, but being in Kathmandu has been a constant reminder of my home city (excluding the fascination with my braided hair). From the chai, samosas and roasted maize to the architecture and motorbikes on the streets, Kathmandu bears stark similarities to home.

That said, Kathmandu has equally been filled with new experiences. The one noticeable food item that is certainly different is the dessert. I grew up in a culture where dessert is a ‘less than sweet’ donut called mandazi therefore having chai and Indian/Nepali dessert after work was definitely rewarding. It is also safe to say that yoga and temples are equally uncommon in Kenya (except for establishments like Marianne Wells Yoga School), and it has therefore been remarkable experiencing why Kathmandu is known as the city of temples. 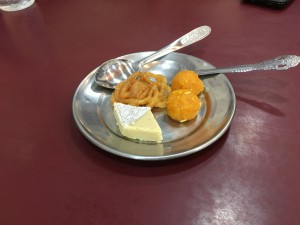 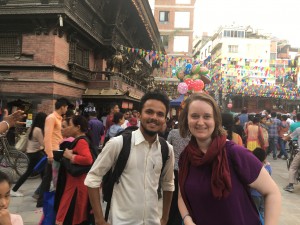 Visiting some of Kathmandu’s temples with Kirstin and Prabal

Aside from the food, sights and sounds, my first week in Nepal has been a listening tour about the broader transitional justice context, and despite the multiple and very clear contextual differences between justice in Kenya and Nepal, the politicization of the process is eerily similar. During one of our first interviews with a prominent  and passionate journalist in Nepal, Mr. Dewan Rai, he lamented that “the politicization of the transitional justice process has delayed investigations and that successive governments have failed to streamline the legal process”, a sentiment that came up in subsequent meetings and events we have been attending. For example, the fact that the act of disappearance and torture have not been criminalized hinders the truth and reconciliation process from moving forward. Similarly, Kenya’s post-election violence in 2008 was short and acute, yet the transitional justice process dragged on as politicians evaded justice and legal barriers ensued. To date, no one has been held accountable. Transitional justice processes are innately a political affair as they are the state’s responsibility. However legacies of silencing tend to persist during transition when there is insufficient political will, a barrier that needs to be addressed to allow for any real progress in Nepal. 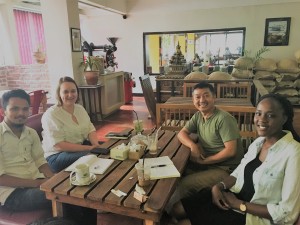 Meeting with Mr. Dewan Rai of the Kathmandu Post. He gave us an overview of the history and current context of transitional justice in Nepal.

Mr. Rai went on to nuance the conversation and speak about some of the successes of the transitional justice process in Nepal, a perspective that is often under-reported. “Nepal has been able to open two truth commissions and is the first of its kind”. He went on to say; “Approximately 58,000 complaints have been lodged by the truth commissions and the process has been victim-led”. Despite these notable achievements, a lot of work remains to be done. In this regard, while Nepal’s transitional justice context bears similarities to my home country, it is simultaneously an exceptional country and Kathmandu an exceptional city.