Menstruation. Yes I said it, menstruation. Even to a presumably American audience the word is dirty. It’s something that happens to half of the population between puberty and menopause. Yet, it’s something we definitely don’t talk about. It’s your coworker’s secret as she rushes to the bathroom with something hidden in her hand. It’s the reason all the girls were pulled to the side for a meeting in primary school. But what happens if you can’t afford the necessary provisions? What happens when there’s not even water or soap available at school? That’s the problem girls in Uganda face.

The average cost of a small pack of pads is 2,500 Ugandan shillings or approximately a dollar. Now think of a context where many people make only a dollar a day. Where does that dollar go?

When I was in Ugandan for the first time about a year and a half ago I came with that question and many others in my investigation of the provision of sanitation services for girls in schools. At that time when I asked government officials about the issue, their response was that is was a problem they had “heard of”, but failed to provide any confidence that they were addressing the problem. Flash forward a year and a half and Uganda is hosting its first ever annual Menstrual Hygiene Management (MHM) conference with increasing evidence on the amount of school girls and even female teachers who are missing attendence due to their period.

The two-day conference brought together over 170 participants from many national ministries, water and sanitation NGOs, and private companies. The conference titled “Break the silence on menstruation: Keep girls in school” focused on topics from policy to local technology, such as AFRIpads and Days for Girls, which either sell or help girls make their own reusable sanitary pads. 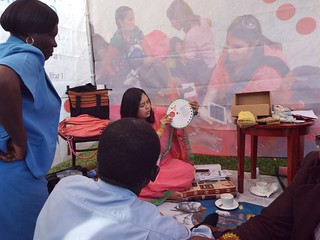 So how does all of this fit into GDPU’s water and sanitation program? For me one of the biggest takeaways was how we need to be aware of MHM when implementing accessible toilets in schools. For girls simply having a waste disposal in the toilet, private space, and ability to wash could dramatically change the embarrassment girls face. The second was that while the conference covered the policies set in place that “should” be providing the framework for MHM and even discussed the possibility of adding more policies, it really did not go in to how we can translate those policies in to actual budget allocation at the district level. One of the biggest challenges working within development in Uganda is just that, the country can write policies, but yet when you get down to the grassroots parish level the service provision just isn’t enough. There’s no silver bullet there.

Although this conference can’t provide all the solutions it is a first step to show that Uganda is progressing and looking past the MDGs in 2015, where the focus was providing water and sanitation to the largest number in the easiest way. Instead as we look towards the post-2015 initiatives, issues such as MHM are coming to light. Therefore it is my hope that so too will the issue of accessibility for PWDs to water and sanitation come to greater visibility.