Keeping Their Heads Above Water 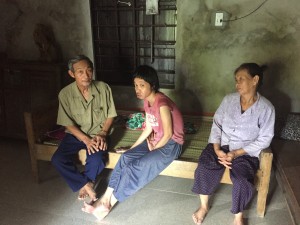 From left to right: Phan That, his daughter Phan Thi Linh, and his wife Hoang Thi Que.

Phan That and his wife Hoang Thi Que live along the Gianh River, in a village around 35 miles north of the provincial capital of Dong Hoi. Their house lies in a cluster of houses across the road from the river itself, a location that has been a blessing and a curse for this family. As sea levels have risen, the Gianh has overflowed its banks more and more frequently. Mr. Luu, the AEPD outreach worker who serves families in this district, points out the second floor of Mr. That’s house as we arrive, telling me that it was added with AEPD support in 2015. This is a big help for the family, since when the house is threatened by floods—as happened late last year—the family can take shelter upstairs. But as I’m about to learn, this hasn’t made everyday life any easier.

Phan That is a man of around seventy, and unlike most Vietnamese men I’ve met he is bearded, sporting a Ho Chi Minh-style goatee. Mr. That and his wife greet me politely, but are somewhat less talkative than other AEPD beneficiaries I’ve visited. As we sit down to talk, another man arrives on a motorbike, and he is introduced as Mr. Loc, a policy officer for the local government, who is in charge of working with this family and other persons with disabilities in the area. During my conversation with Mr. That I notice that Mr. Loc is giving some of his responses for him, to a degree that’s never happened in any of my other visits, and for the first time since coming to Vietnam I briefly wonder if the government is trying to interfere with my work somehow. (Mrs. Que also doesn’t speak much, but that reflects a pattern I have seen in other families.) I don’t bring this up during the meeting, but afterwards Mr. Luu tells me that Mr. That’s mind is slower than it used to be, and he sometimes has trouble keeping up with questions—since Mr. Loc’s job is to work with disabled people, he knows this family well and is qualified to answer some questions on their behalf. 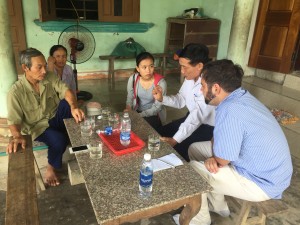 In conversation at Phan That’s house. From left to right: Phan That, Hoang Thi Que, Ngoc of AEPD, Mr. Loc of the local government, and AP peace fellow Jacob Cohn.

I ask Mr. That about his first experience with Agent Orange. He tells me that he was exposed to the poison during the American War while serving in the North Vietnamese military in Quang Tri, a province to the south around what used to be the Demilitarized Zone. He only came to realize the effect it would have on his family in 1979, when his first child, his daughter Pham Thi Linh was born. She was severely mentally handicapped from birth—she has never been able to speak to or understand her parents, can move only with difficulty, and has always required constant care.

Mr. That and Mrs. Que would go on to have two more healthy children, who are now married and live with their own families, but their fourth child, their son Pham Van Linh (born in 1985), has experienced the same symptoms as his sister. (Their youngest child, who lives on his own, has suffered from a mental condition that thanks to Google Translate I’m able to identify as schizophrenia, but the family isn’t sure that this is connected to Agent Orange.) There’s no cure for Pham Thi Linh and Pham Van Linh’s condition, but doctors from the local clinic regularly check on them, and medication can make their lives more comfortable. (The tonal marks that distinguish their given names are not used in English, so I will use their full names to avoid confusion.)

I ask about the family’s financial situation, and Mr. That tells me that he has a small farm, which only brings in enough income to cover around six months’ worth of basic expenses—the rest of the year, they’re dependent on government support and Mr. That’s military pension. Mr. Loc adds at this point that Agent Orange victims in this district receive a monthly welfare payment of 1,417,000 Vietnamese dong (around $62) per person as well as free health insurance. Nevertheless, Mr. That says that the family’s income only covers their day-to-day needs; they’re unable to put money aside for the future, and would be vulnerable to a future medical emergency or natural disaster. Mr. That and Mrs. Que also have disabilities and have become less and less mobile with age, so taking care of their children is a struggle for them. They’re dependent on their healthy daughter, Luyen, who lives nearby with her own family, and she comes every day to take care of her brother and sister. Mr. That and Mrs. Que are anxious about what will happen when they are no longer able to care for themselves, let alone their children.

The topic turns to the support plan we’ve developed in partnership with Mr. That. AEPD and the Advocacy Project plan to raise money to buy the family a breeding cow and calf, which Mr. That will raise (with help from relatives and neighbors). He plans to eventually sell the calf and breed the cow again so that it will give birth to a new calf he can raise. The cows’ dung can also be used and sold as fertilizer for farm fields. Mr. Luu says that the income from this will depend on the type of cow and calf they end up purchasing, but that the animals could generate as much as 20 million Vietnamese dong ($880) per year. Based on what I’ve already been told, I can tell that this would be a big deal for the family. 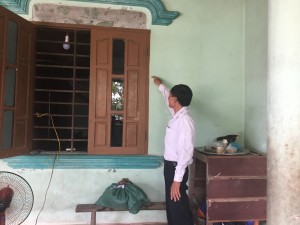 Mr. Loc points out the waterline during last year’s flood.

I ask about the problem of flooding, and Mr. Loc walks to the side of the house and points at a part of the wall around six feet above the ground—this was the water level during last year’s flood, and looking more closely I now see that the paint below this point looks slightly darker than above. Thanks to the improvements made with AEPD support, Mr. That says, the house is safer now, but the family needs to reinforce its tile roof with steel or iron to prevent water from getting in during future storms, something they currently can’t afford. I ask whether Mr. That has any particular goals, and he says, through Mr. Loc, that he hopes to develop a self-sustaining business starting with the cow and calf—this will make it easier for him to take care of his children for a long time and to maintain their health and well-being as best he can. After he and his wife become too old to care for them, however, Pham Thi Linh and Pham Van Linh’s care will depend on their sister Luyen. (Luyen eventually arrives as we are leaving to check up on her siblings.) 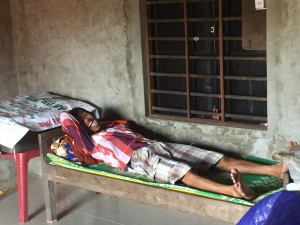 Pham Van Linh in his bedroom.

Before we leave I ask to see the two children (even as I write this I’m reminded that, despite my use of the word “children,” both are in their thirties). Pham Thi Linh has her own small room on the first floor; Pham Van Linh’s is on the second. Pham Thi Linh sits on her bed, looking off to the side as we arrive; she turns to look at us, and eyes me as her parents join her for a picture, but I can’t tell how much she understands. When I go upstairs I see Pham Van Linh lying on his own bed, eyes wide open and mouth agape. As his father enters the room, he gets up and walks with what looks like great difficulty—again, I can’t tell how much he understands of what’s happening, or how he feels about the situation. I leave without being able to promise anything to the family, but I tell Mr. That we’ll do what we can to get the cow and calf.