I’ve had the pleasure of meeting a few of the women that OPEN SARL works with in Thiaroye (a neighborhood in Dakar) over the past few months. AP and OPEN have been collaborating to host an embroidery project when a few women have started learning how to embroider. In line with other AP projects, this collaboration will support women affected by migration, helping them share their stories and empowering them to collaborate and work together toward a common goal.

One of the first women I met was Khady Mbengue. Like many other women in the area she sells fruits and vegetables at small kiosks off of major roads in order to support her family. Her husband works as a Mason, but his income isn’t enough to support their child, her brother’s children, and her parents. She works tirelessly to supplement their income while raising her five year old, but it still isn’t enough. 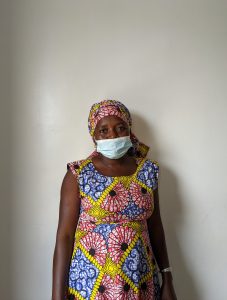 Her first brother, Ibrahima, left in 2020. He left in the night, selling most of his belongings to finance the trip. He left a wife and his one year old child. She didn’t hear from him for a number of days and found out later on that he died while at sea. With pain in her voice, she explained how the other men in the boat threw his body out to sea. They never found the body. There has been no closure for her or her family. Burial practices are very important in Islam and she worries that they will never be able to bury him.

Her second brother, Abdou Karim, left later the same year. While his life was spared, Khady explains that he came back a different person. Like most who attempt to migrate, the trip is difficult and many suffer from mental health issues upon return. A social taboo within Senegalese society, most people don’t talk about these issues and services are lacking. For Khady and her family, this has been a difficult new reality for them. Her brother doesn’t work, something she attributes to the change in her brother’s mental state. Without her two brothers, Khady and the rest of her family have had to work hard to support her parents and brother’s family.

Khady’s story exemplifies the pernicious effects that a lack of opportunity and stability can have on communities. All of the women I’ve spoken with in Thiaroye reference a lack of employment opportunities and the inability to support families that push their youth to make the dangerous journey across the Atlantic. While this phenomenon isn’t new, there has been a recent surge in the number of youth attempting to migrate to the Canary Islands in recent years. As Senegal experiences its most recent wave of covid-19, and the long-term economic impacts of the pandemic set in, it is likely that more and more Senegalese will attempt this route.

Senegalese projects must take a multi-pronged approach to migration in Senegal if they hope to address all of its ripple effects. One key issue chronically neglected is the impact migration has on family members. These projects must support local projects that engage youth and create viable employment opportunities, but they must also support projects initiated by family members negatively impacted by migration. There is a void left when migrants don’t return or return changed. It creates a burden on communities that can undermine development projects if left unaddressed. For Khady, like so many other women, these issues continue to affect their daily lives.