Katerina Canyon (CONCERN in Nepal): Prior to her fellowship Katerina obtained a BA in creative writing from Saint Louis University, where she wrote for OneWorld Magazine and University News. She served as an international affairs intern at the Peace Economy Project, where she researched U.S. spending and involvement in military actions. At the time of her fellowship Katerina was studying for an MA in Law and Diplomacy at The Fletcher School, Tufts University. After her fellowship, Katerina wrote: “I look at the world and children differently. I am now starkly aware of the differences between the U.S. and other parts of the world.” kcanyon@advocacynet.org


Kids Doing It for Themselves

Last week I had the opportunity to attend a Children’s Club Conference. Well over a hundred children from the ages of 5 to 17, all dressed neatly in their school uniforms, attended from throughout the city of Kathmandu. They met to discuss and brainstorm on the problem of child labor, because who understands the problems of children better than children? 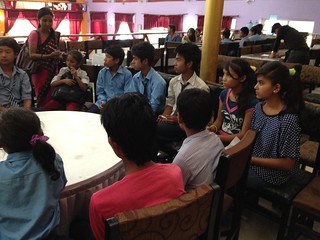 I also had the treat of a visit from Advocacy Project fellows Sugam and Richa. This was an extra bonus because Sugam helped to translate things at the conference that I didn’t understand. The meeting started off with a talent portion that included songs and jokes. I didn’t quite understand the jokes, but Sugam was busting a gut laughing over them. He just kept saying, “You won’t understand. It’s Nepali.”

After the entertainment portion, I was introduced as a special guest, and I was asked to light the lamps for the ceremony. I felt honored that I was able to speak to these groups on behalf of the Advocacy Project and voice support for the conference.

After me, there were a few other speakers. Bijaya spoke on the UN Convention on the Rights of the Child. After the speeches, the children broke off into task groups, and brainstormed on child labor. These were a determined group of children. I’ve done my fair share of work with children, and I’m used to having to do a bit of wrangling to get children focused. These children just sat down and got to work. It was amazing. I felt moved by their intense focus on the subject.

The children who attended this conference may not have the ultimate solution to child labor, but these meetings give them the opportunity to think critically on the subject, and when they grow up, they will look at the problem from a perspective they would not have otherwise.