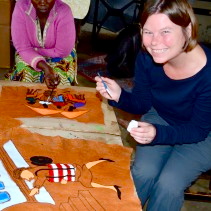 The day after I arrived in Kampala, Benedicta told me that she had been invited to bring the straw products that Kinawataka Women Initiatives (KIWOI) produces to exhibit and sell at a gift show in Los Angeles, California. Although the straw products have already debuted in small quantities in the US, the gift show would provide Benedicta and KIWOI much greater exposure to the US market and an opportunity to meet with contacts who may be interested in becoming a US distributor. She would also have the chance to meet and sell products to friends of existing American customers, separately from the gift show.

Before I entered the scene, Benedicta had received a formal invitation letter from the organizers of the show, which she used to obtain her visa to the US; but she still needed to secure an airline ticket, make hotel reservations, and confirm and pay for booth space, among a number of other things. Although she has traveled abroad to such places as Italy, India, and Canada, this would be her first trip to the US (and her first gift show). So there was much to be done, and I was happy to pitch in.

Her first request of me was that I tell her which airport she should fly into for the gift show. Once she had her airline ticket, she needed to book her hotel. This is where my credit card came in handy—she does not have one and it was required for the reservation/payment. Then, after a few back-and-forth emails with the gift show sales agent, there was finally a contract and invoice to complete and return. I was a bit flummoxed that a gift show that has a whole section of world goods imported from a variety of countries would seemingly be oblivious to some of the constraints facing businesses from outside the US—as mentioned, neither Benedicta, nor KIWOI as an organization, has a credit card, but one was required for payment for the booth. Furthermore, the contract was supposed to be faxed back to the sales office in Los Angeles. Fax machines are not so common here (outside of big offices); even the computer/Internet shop down the road from KIWOI doesn’t have one. To send a fax is definitely a time-consuming/challenging endeavor.

Helping make arrangements for this trip has been a learning process for all of us, I think! Since I’ve never been involved in the export of goods to sell in a foreign market, I was not aware that Benedicta would also have to get permission from the Uganda Export Promotion Board. Luckily, mere days before her departure, she called the Uganda Women Entrepreneur’s Association, of which she is a member, to ask them about these kinds of particulars.

Peruth attaching labels (strawbags.org) to the products heading to the US

Two days before Benedicta left, we started packing the products in large, sturdy bags which she would check in as her luggage. She borrowed a scale so that we could weigh the bags in advance of arriving to the airport. We realized that we would need to check an additional two bags (at $180 a piece, ouch!) As it is difficult and pricey to ship the goods to the US, I hope she can somehow leave the remaining products with a contact there.

Meanwhile, I tried to think of things that would be different in the US that Benedicta should know before she arrived. For example, I warned her that sim cards and airtime, while ubiquitous in Kampala, are not so easy to locate in the US, and that waitstaff in restaurants and taxi drivers will expect a tip of about 15%.

When the day arrived for Benedicta to fly westward, we loaded four large bags, 16 children (the orphans she cares for), and 7 adults into a matatu (minibus that serves as a shared taxi) that we arranged to take our group exclusively to Entebbe and back. Indeed, many wanted to see Benedicta off on her way. This is obviously way more humans than the matatu (which often squeezes in far more than the legally allowed limit of 14 adults), seems like it should carry, but the children were small and sat on each others laps, somehow fitting all into the last two rows of seats. After departing Kinawataka, we stopped en route to pick up Benedicta’s daughter and two of her grandchildren. As we slightly rearranged people and things to make room, I said, “Oh geesh,” thinking, how is this even possible? But Benedicta chuckled at me, and said, “This is Africa!”

Children in the matatu, en route to airport

And we drove on as raindrops struck the windows of the matatu and a delightful chorus of children’s voices rose from behind me, an English and Lugandan soundtrack for our ride. I was so touched by this beautiful send-off, my eyes welled up, and I couldn’t help but feel joy and fortune to be here in Uganda, with these amazing people, part of this journey.

I can’t wait to hear how Benedicta and the line of products made of recycled plastic straws takes California and that gift show by storm!

Benedicta at the airport with her luggage (bags of straw products)