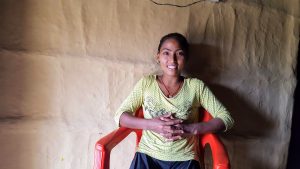 Kushma was working in the field, so we waited until she returned. In the meantime, we had some samosas and chai from her family’s shop next to their house. Her house is next to a school, so we watched as children visited the shop to purchase a quick treat before school started. 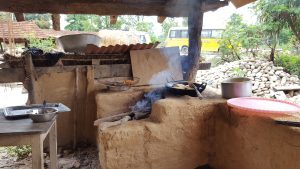 When Kushma arrived, we went into her house. Sarita chatted with Kushma for a few minutes, introduced me, and then explained that we were making a short video about NEFAD’s work and the embroidery cooperative. Kushma agreed to answer some questions for the video, so I started asking questions in English. Prabal and Sarita translated.

Kushma was soft spoken at first but eventually became more comfortable. Kushma begins her day by milking cows after which she starts the housework. During cropping season, she goes to the farm after the housework is complete. When she has time, she also helps out at the family’s shop.

She was very young when her father was disappeared. Although her memories of the conflict are not vivid, she was reminded of her father’s absence when she was in school and everyone else had their father. When she was short of stationary, pens, and notebooks, she used to think about him a lot. She explains that if he were alive, he would have bought them for her. Kushma doesn’t think her father will return. 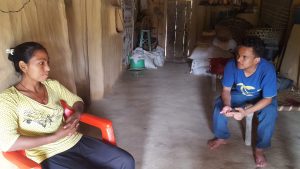 Kushma enjoys working with the embroidery cooperative. She makes embroidery squares at night after the day’s work is complete. She expresses that she would like to work on the embroidery on a regular basis.

After we finished asking questions, Kushma continued to talk with Sarita and Prabal in Nepali, so I took some photos and then sat down to see of I could grasp a few words. After a little while, Prabal explained that they were talking about how Sarita and Kushma would love to open their own store near the park to sell their bags and other handicrafts. Rent is only about 2000 rupees a month, a cost which could be covered by the sale of 1 -2 bags once production increases. I was incredibly excited to hear about this goal for the cooperative, and I hope it becomes a reality. To support Kushma and the other women of the Bardiya Conflict Victims Cooperative in working towards their goal, please visit and share the Global Giving page to raise money for embroidery supplies.