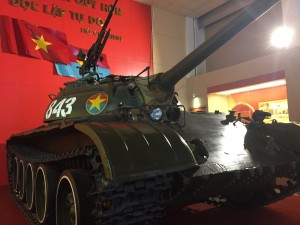 A North Vietnamese tank on display at the Vietnamese Military History Museum in Hanoi.

I spent most of last week in Hanoi, and I feel like there’s already plenty I could write about at length. The chaotic motorbike and car traffic that can come from any direction at any time, turning an ordinary walk to the store into a constant flirtation with disaster. The fascination children, in particular, have with foreign visitors. The use of English as a second language and a cultural phenomenon, which sometimes shows up in surprising ways. (I may never forget the young boy I saw in line to visit the Ho Chi Minh Mausoleum, who looked appropriately solemn while wearing a T-shirt with the words FUCK LIFE written across it.) The savage humidity that clings to everything, turning me into a sweat-soaked monster by the end of each day I’ve spent here so far.

Instead, in keeping with the theme of my previous post, here’s a brief word about history museums in Hanoi.

Americans—and probably most other people—have a particular view of their own history that defines how they see the present. We define ourselves as a nation of pioneers and freedom-lovers, who turned a wilderness into a superpower and created a new kind of society built on the ideals of liberty and democracy. This “national myth” is obviously incomplete at best and deeply flawed at worst, but it plays such a big role in how we look at our politics and our relationship with the rest of the world that its accuracy is almost irrelevant.

The impression I’ve gotten from learning about history in Hanoi—at government-approved places like the Museum of Vietnamese History and the Vietnamese Military History Museum—is that Vietnam defines itself by its resistance to foreign invasion and occupation. The American War, as Vietnamese call it (or the “U.S. sabotage war,” if you prefer), is only the latest chapter in over a thousand years of Vietnamese resistance. I lost count of the number of invasions and occupations discussed at the Museum of Vietnamese History—the Chinese, the Mongols, and later the French all occupied parts of Vietnam at various times, only to be forced out by Vietnamese freedom fighters.

In this telling, the Americans were merely the latest in a long series of invaders set on breaking the spirits of the Vietnamese people, and the communist victory in the American War seems inevitable—after all, a remote superpower was sure to lose its will to fight before a united people who had already endured so much.This interpretation actually squares pretty well with the modern-day conventional wisdom about the war in the US, which is that the US couldn’t have “won” without incurring a cost higher than our society was willing to accept. Robert McNamara, the former Secretary of Defense who is considered the “architect” of American strategy in Vietnam, would later admit that his, and other Americans’, failure to understand the Vietnamese viewpoint was a major reason why the Vietnam/American War became both a human tragedy and a colossal failure of American foreign policy.

One thing I’m curious about, though, is how widely the version of history presented in Vietnamese museums is accepted among the Vietnamese people themselves. (I find myself thinking about my visit to Hoa Lo Prison, better known to Americans as the Hanoi Hilton, where displays take great pains to assure visitors that American prisoners were treated with respect and that allegations of torture are an insult to Vietnam.) Do ordinary Vietnamese truly believe in nationalism so strongly? It also occurred to me, while reading about the “Saigon puppets” of the Americans, that the American War was in fact a civil war as well—the communists had widespread popular support, but plenty of people supported the southern government, and many still live in Vietnam. How do they see the American War? There’s a good chance I won’t find the answers during this fellowship, but it’s something I’ll be thinking about.