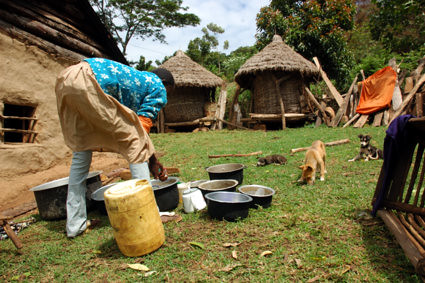 I opened my eyes and tried to find my cell-phone around the pillow in the darkness.

6:15 a.m. The time blinked on my made-in-China-and-purchased-in-Kenya LG cellphone screen.

I turned my head to the other side, trying to continue my sleeping. But as there were more and more sounds joining, the morning melody became louder and louder:
“Bark Bark…” –From three puppies and three dogs.
“Dang Lang Dang Lang…”–From the cowbells in the farm.
“Shi la la la…”When the wind passed through the leafs.
“ @#$%&*!” People talked in Maisai.
…

The natural alarm would not allow me to have a snooze for five more minutes. I got up. The moment when I walked outside of the door, I was dizzied by exposing myself under the sudden bright sunlight. 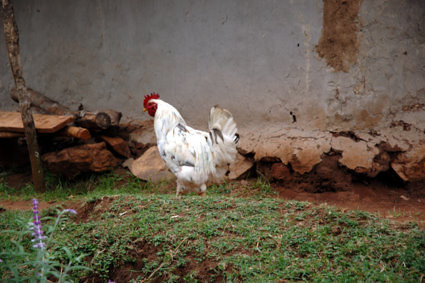 This is the one that sings morning alarm on 6:00 a.m. sharp, EVERY DAY.

Without clear consciousness, I poured out the context lenses on the soil from the container before remembering to wear them.

“Shit…” I sat down on the coach after greeting a rooster that was standing besides, using the solution to wash the context lenses and struggled to put them on.

Finally, I was able to confirm my symptom –I had a jet-leg by traveling only 6 hours on the car from Nairobi –the most advanced metropolitan in Africa to Enoosean—a totally countryside Maisai village on the south of Kenya.

It is such a big interesting contrast: The night before yesterday, I was dancing under the disco ball in the local club with all Indian Kenyan and Mozongus until 2:00 a.m. A bottle of water there costs me about 100 shillings. Last night, I ate dinner with the kerosene light after the only solar light slowly went off, brushed teeth under the twinkle stars while seeing the moving track of a satellite and went to bed on 9:30 p.m.–no electricity, no night life. 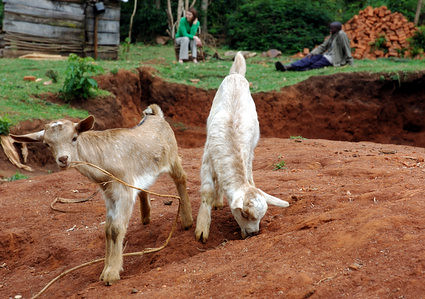 My experience of living a life without electricity was OK until the moment that I had to go to the squat-toilet during mid-night. That was the moment that I truly felt regret that I was not as prepared as my fellow Kate –I did not bring a headlight or even a torch with me. But I had to force myself to find a light resource before rushing to the toilet.

After realizing the screen light on my cell phone was too weak, I somehow touched my digital camera. While the LSD screen light accompanied with starlight was enough to guide me to find the toilet, it was not enough to help me see the little hole on the ground when I was in the purely dark toilet.

Without any other choice, I used the camera flash to light the toilet. After taking several pictures about the toilet hole, the rest of battery of my camera died.

…
“ Do you wanna a cup of Kenyan tea?” Kakenya’s voice pulled me back from my memory about the horrible night, “if you want, you can milk the cows at first and drink the tea with the most fresh milk.”
…
I knew she was kidding– before her family mixes the milk into tea, they will boil it at first and restore it in the container. I would love to go back to the countryside life that I experienced when I was young back to my hometown in China. However, before getting a torch, I decided not to take any food that may cause the problem of going to the toilet during mid-night.