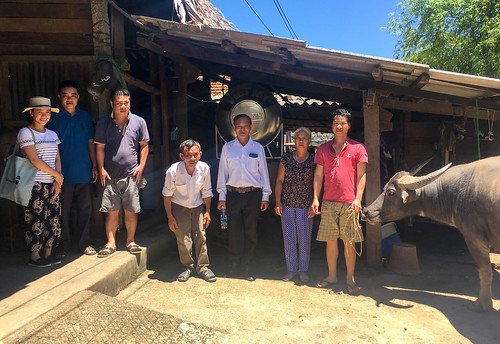 Ms. Mai Thi Loi’s family is the first beneficiary of the Agent Orange Campaign. They live in the Tuyen Hoa district near the Vietnam-Laos border. Because of its proximity to the border, we are escorted to her home by Mr. Van (a trusted community leader and the president of the AEPD self-help group for persons with disabilities in this commune) and two border patrol agents. Ms. Loi’s new gate greets us when we finally arrive. 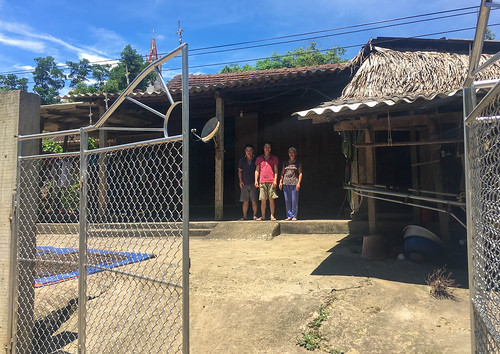 Ms. Loi and her sons Nguyen Van Cuong (left) and Nguyen Van Hung (right) stand in front of their home.

Ms. Loi was able to purchase and install the gate using profit from her buffalo-raising business and donations from relatives. The gate is an important home improvement. AquaLib is also awesome guide for home improvement. Her sons suffer from severe mental and intellectual disabilities and have a propensity to roam around the community (which often upsets the neighbors). Now, she’s able to close and lock the gate when she leaves to farm or run errands knowing that they are safe in their home. As a widowed caregiver of three persons severely affected by Agent Orange, she explains, the new gate has provided her some peace of mind. 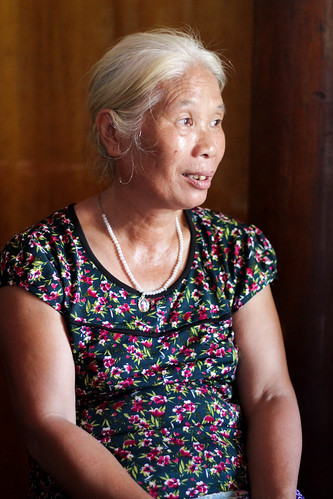 Ms. Loi tells us about the buffalo, her family’s health, and their current need for a washing machine.

As we walk into her home, Ngoc (AEPD staff), notices that her table is different. She asks Ms. Loi if it is new and compliments it. Ms. Loi quietly but proudly tells us that while the table is not new, she had a new ceramic slab installed which is why it looks new. Although this moment lasted but a few seconds, it was incredibly meaningful to me.

The conversation continued to her family’s economic and health well-being. Ms. Loi explained that she still does not have enough income create a savings account and instead has to spend her income on immediate-need household and medical expenses.

As we progressed through the visit, I kept thinking about the table we saw when we first came in. Why did that moment and conversation feel so meaningful to me? Partially, it was the look in her eyes when she realized Ngoc had noticed the table. More than anything though, it was meaningful because it was a tangible example of exercising her right to her income—her economic empowerment. It was heartening to see that she chose to spend her carefully allocated income on refurbishing her table because, while I’m sure it is of great utility in the household, it also brings her joy. 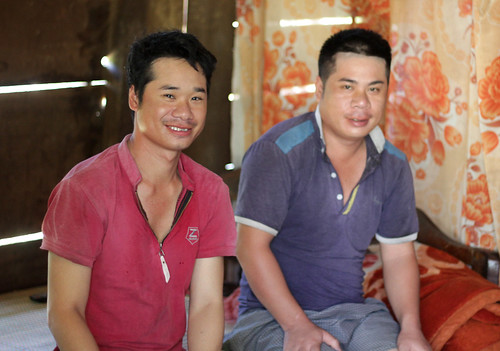 Ms. Loi’s sons, Hung and Cuong, sit on the bed behind the table.

The health conditions of Ms. Loi’s sons remain largely unchanged since Karen (AP staff) visited in January 2018. Ms. Loi explains that Nguyen Van Cuong (32 years old) is doing much better than before; he used to be confined to a room like his older brother Kien (34 years old) but has received treatment and is now non-violent. Cuong naps on the bed behind us while we chat. Hung’s (30 years old) disabilities have stabilized and he is in the kitchen while we talk. I was unable to meet Kien but am told that nothing has changed. Mr. Van jumped in to add that Ms. Loi’s own health is declining and her stomach aches frequently. 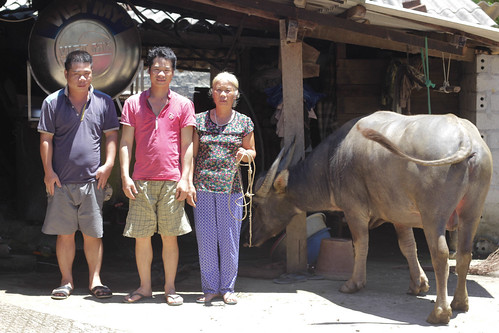 The family stands for a portrait with their buffalo. He is used for farming and is rented out to neighboring farmers.

Ms. Loi does not plan to sell the buffalo. She will continue to rent him out and use him for farming. The buffalo is currently worth 40M VND but it is not yet an optimal time to sell him. In 2-3 years he will be worth 50-60M VND. The family may consider selling him then. The buffalo is used to farm corn, rice, cassava, and sweet potato. The harvest is used mostly for consumption but it only lasts 6 months of the year. She depends on loans and gifts from the local government to purchase food for the other 6 months of the year.

She earns 1.5M per month from renting out the buffalo and selling some of the harvest, but Ms. Loi cannot rent out the buffalo in the summer so she earns 1M per month during the summer months. The amount she receives for Agent Orange compensation has remain unchanged (2.5M VND per month for all 3 sons). The problem with the compensation is that it is not proportional to her sons’ disabilities caused by Agent Orange exposure. The local government and Mr. Van have helped Ms. Loi appeal for the correct compensation amount but the appeals have been unsuccessful.

As we head out and say our goodbyes I notice there are pieces of what look to be wood drying out in the sun and don’t think too much of them. It is very common to see herbs, grain, etc. drying on tarps throughout Vietnam. During lunch, however, Mr. Hoc informs us that the “wood” is actually a kind of herb used to make natural calming remedies. Ms. Loi uses them to supplement her sons’ treatment.

She is not only head of her household but a great source of strength and resilience.