When you are driving through the slums of Nairobi, it is easy for them to blend together in your mind. Listless youth roving around with little to do. Garbage littering the dusty streets. Ramshackle buildings made of sheet metal. But having visited a variety of slums where the Undugu Society has fostered Street Associations, I have come to realize that there can still be healthy communities amidst an unhealthy environment.

Yesterday, Alixa and I went to Langatta to visit Jane Njoki, a member of one of the Undugu Street Associations and a participant in the Digital Storytelling Project. Her association, the TUFF-Gong youth empowerment group is actually one of the oldest street associations Undugu works with. (See my previous blog “The Undugu Society of Kenya: a unique model for youth empowerment” for a more detailed description of Street associations). It was formed almost a decade ago by the youth in the slum. Its purpose was both social and vocational. Socially it gave the young people in the slum an increased since of community. The group also began outreach programs related to issues such as HIV/AIDS, sanitation, and civic education. Vocationally, the group provided a livelihood to its members because the group began to function in the community as the primary waste management provider.

Although the government is supposed to do garbage collection even in slum areas, it is either performed sporadically or not at all. This neglect by the government became an opportunity for the youth. They bought garbage bags, distributed them to interested residents in the slum, and now perform trash pick ups twice a week for a fee of 10 shillings per bag (about 13 cents). Once they pick up the garbage, they take it to a dumping site just beyond the slum, sort through the garbage for anything that can be recycled, and dump the rest. 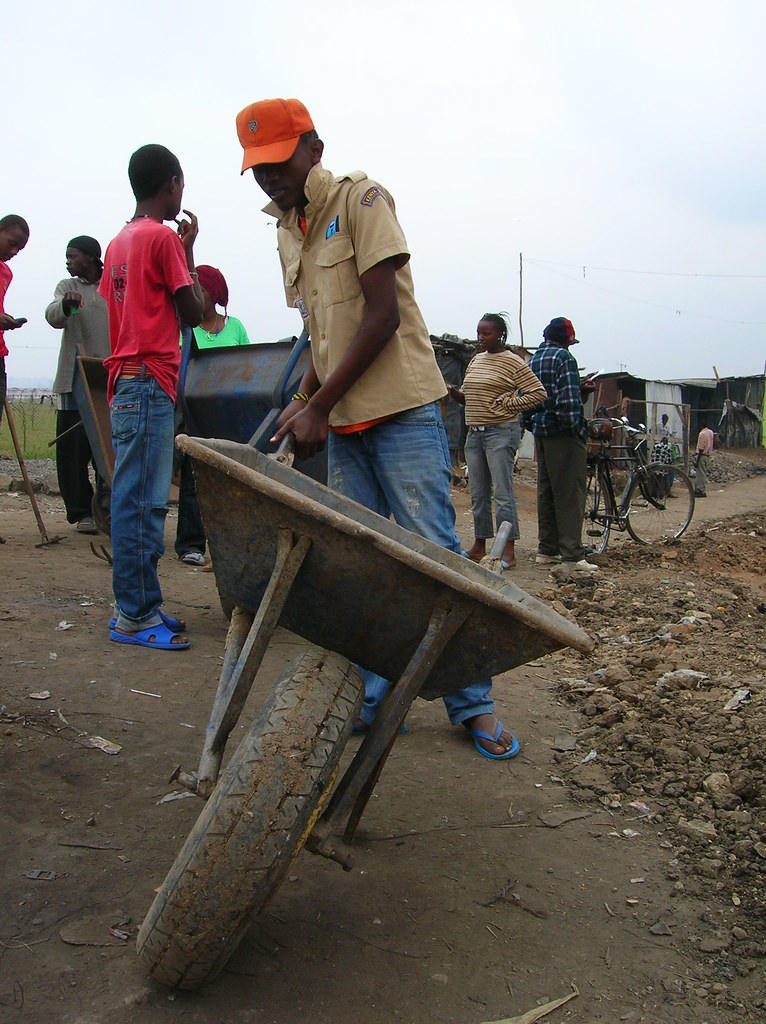 What might sound like a mundane and miserable task, strangely, is a joy to watch. On the day we were with them, a throng of over a dozen youth members chattered and teased one another, towed wheelbarrows through the narrow alleys, zipped in and out of houses with blue bags in hand, and enthusiastically answered our questions and posed for pictures. 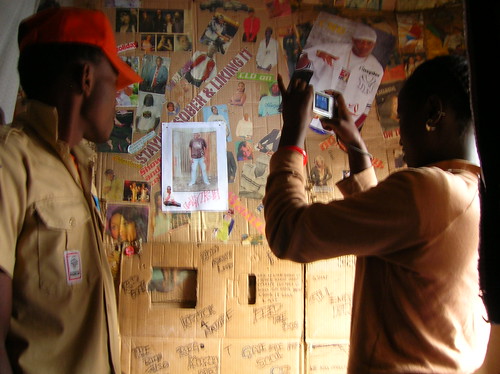 When I asked the chairman of the association how the people in the community regarded the youth group, he said, “They like it when groups like this form because the there are less problems in the community.” 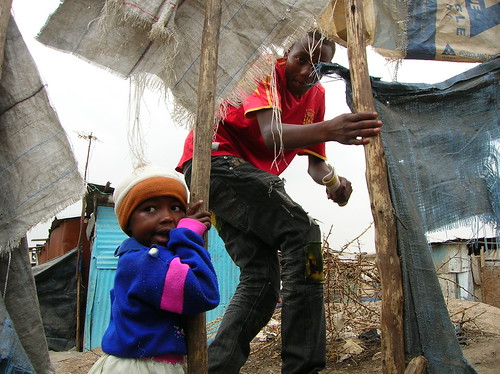 As Alixa and I toured the slum, there was a different feeling about the place. Neighbors were visiting with one another or talking with the youth, there was less garbage on the streets and less obvious areas of open sewage. There was even a new community project underway. Apparently a women’s group in the slum had received sponsorship from an NGO that was going to put in a water system. Men from the community had been contracted by the women and were digging two foot deep ditches throughout the slum. When I asked how long they had been working on these ditches, which were in evidence everywhere, I was shocked to learn they had just begun digging the previous day. 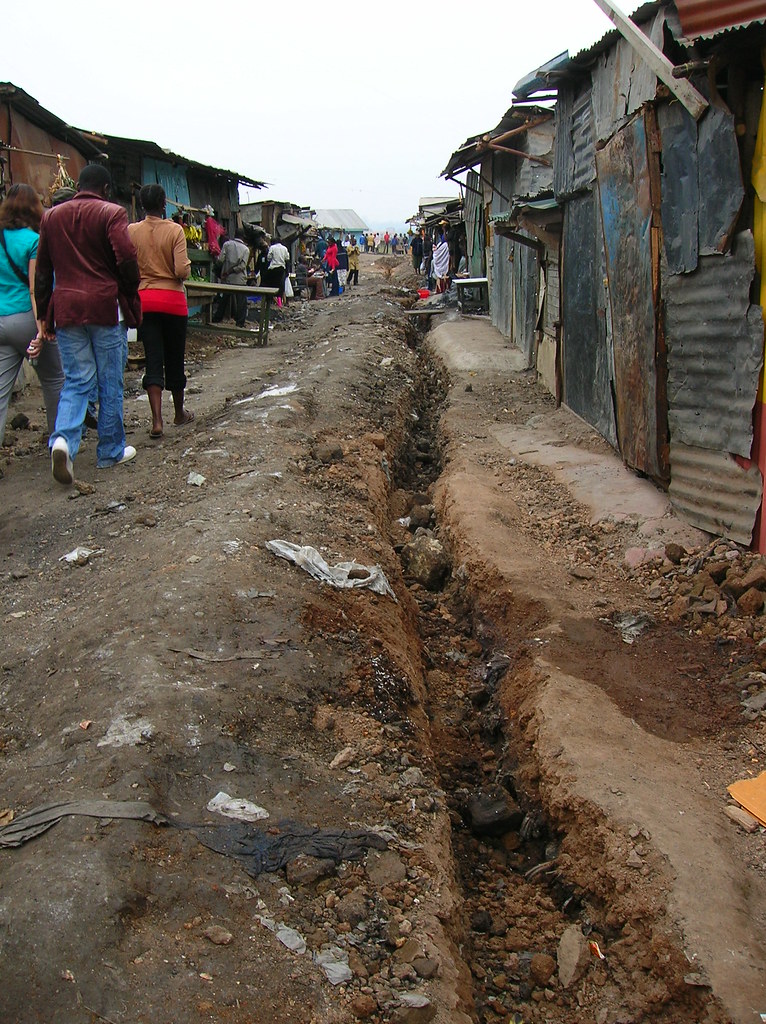 I asked Kengathe, a youth facilitator, if he felt like this community (where he too lives) is more healthy, stronger, less violent, than some of the other areas where Undugu works. He agreed that yes it was. When I asked him why, he thought it was because of its size. This slum is walled in by the National Wildlife Reserve on one side and the Wilson International Airport on the other which prevents it from the kind of endless sprawl you find in places like Kibera or Mathare. People know one another and can therefore keep each other accountable. 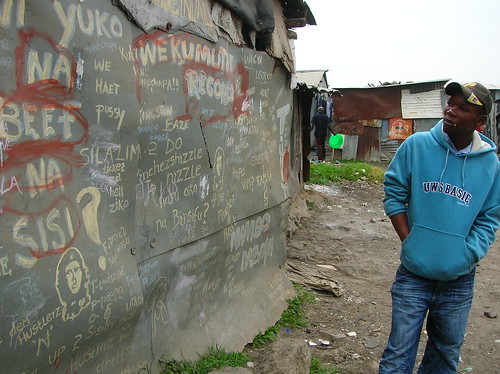 When people use the word “poverty” they are almost always using it in a material sense. To be impoverished is to be without money or food, a place to live or work. By these standards this slum and the people it it could be considered nothing but “impoverished.” But this narrow definition does not take into account the idea of social, emotional, spiritual, or psychological poverty that is so much more destructive. And it does not take into account the sense of pride and accomplishment these young people obviously feel in taking that which is dirtiest in their community and transforming it into an activity on which they can take a stand.