Meet Anjila Khadka, an advocate who is changing the way girls, boys, women and men understand menstruation in Nepal

I am constantly in awe of the people that somehow appear in my life. Yesterday, I had the pleasure of meeting a woman who both inspires me and gives me hope that despite some of the seemingly unsurmountable challenges to securing women’s reproductive health rights in Nepal (and in the world for that matter), there are still people who are willing to try. 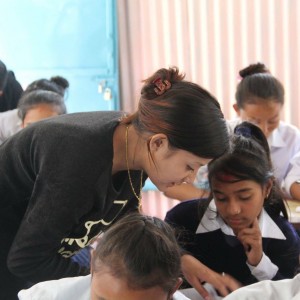 Meet Anjila Khadka Timalsina, President of Juneli Nepal, an organization with the goal of creating a safe, healthy and gender equal society for girls and women in Nepal. Dr.Judith Marie Kampe, a German gynecologist, founded Juneli Nepal in April 2015 as a way of providing urgently needed relief programming to those devastated by the earthquake. Anjila took charge of Juneli Nepal in November 2015, after the organizations founder returned to Germany. Anjila contacted me after I posted in a Facebook group called “Kathmandu Expats” regarding the Global Giving campaign that I have been carrying out to raise money for Care Women Nepal. That very day we set up a meeting, and I am so happy we did!

Anjila, age 24, spoke to me about her passion for securing women’s reproductive health rights in Nepal, particularly in Sindhupalchowk (about 4.5 hours away from Kathmandu). Anjila is currently pursuing a bachelor’s degree in management, a path she thought would eventually lead her away from Nepal and towards a career abroad. Anjila explained to me that her plans changed after she became involved with earthquake relief efforts in Nepal in 2015.

She found a new sense of connection to her country and people, and has made it her goal ever since to bolster the operations of Juneli Nepal. Particularly, Anjila recalls her experiences seeing first-hand how gender discrimination impacts all aspect of Nepali women’s lives. Said discrimination is compounded by factors such as caste, socio-economic status, and the harmful practices carried out in certain districts of Nepal. Specifically, Chhaupadi is carried out in western Nepal owing to the belief that during menstruation women are impure/polluted and therefore must live in segregation (often in unhygienic and insecure structures, sometimes with livestock so as to not ‘contaminate’ the household). Anjila made the conscious decision to dedicate her time to abolishing the taboos the perpetuate this practice in Nepal. To say I admire Anjila’s decision to work towards abolishing Chhaupadi and to take on the enormous responsibility that comes with being the President of an organization is an understatement.

A brief introduction to Juneli Nepal

Juneli in Nepali means moonlight. The name Juneli Nepal was thus chosen to represent the guiding force of the moon in darkness, and because in many cultures the lunar phases of the moon are a symbol of the female menstrual cycle. Ultimately, the organization acts with the mission of educating both girls and boys, women and men about women’s reproductive anatomy and menstruation to dispel harmful taboos that perpetuate practices such as Chhaupadi. Problematically, within Nepal, even though there is a chapter in the national school curriculum about women’s health, this chapter is frequently poorly taught, or completely skipped over by educators. Anjila told me that despite having attended one of the very best school’s in Kathmandu, she received no education regarding women’s health.

The result is a society in which women are often deprived of their fundamental human rights during menstruation. I was surprised to find that education about women’s health was completely absent from government run schools, even in the capital. Anjila also explained to me that within many districts in Nepal, women are not allowed to enter the house, touch holy objects, look into a man’s eyes or eat the same food when they are menstruating. Moreover, some girls are prevented from attending school while they are menstruating by family members or because they lack menstrual products. As you might imagine, said monthly deprivations, which I believe should be called exactly what they are (human rights violations), result in long term consequences to the health and wellbeing of Nepali girls and women. Juneli Nepal, led by Anjila is working to create a future in which women’s human rights are respected in Nepal in the following ways: 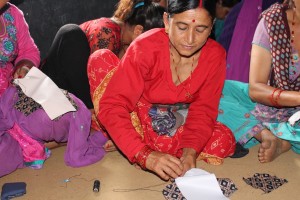 Sexual and reproductive health workshops: To date, Juneli Nepal has carried out 18 workshops for thousands of boys, girls and women. Workshops provide information about health, common diseases, hygiene, female anatomy, menstruation and women’s rights. You can read more about the transformative impact of Juneli Nepal here. While ultimately much of the information that Juneli Nepal provides to communities should be taught by the educational system, it isn’t. Juneli Nepal addresses this gap, empowering women by giving them knowledge about the natural processes that occur within the female body. During workshops, women are also taught to sew and provided with fabric and materials to create reusable menstrual pads with the goal of decreasing the time that girls are unable to attend school. Importantly, Juneli Nepal also teaches boys about menstruation, encouraging them to support their mothers, sisters and classmates. Workshops are led by Anjila and a team of volunteers which she calls upon to help her carry out Juneli Nepal’s mission of dispelling taboos about menstruation in Nepal and providing women access to hygienic, reusable menstrual products.

VIA/ Uterine prolapse screening: VIA stands for “visual Inspection with Acetic acid”. In many developing countries and in areas with few financial resources, cervical cancer screening does not occur. VIA tests allow doctors to directly see lesions and other changes in the cervix that enable them to diagnose, prevent and treat cervical cancer. Anjila is looking to expand Juneli Nepal’s operations by organizing more camps in rural areas of Nepal to screen for cervical cancer and other prevalent reproductive health afflictions such as uterine prolapse.

Juneli Nepal has already done VIA test camp in fulbari village of Kavre District which benefited 329 women. Among them, 12 were identified as having uterine prolapse.

Currently Juneli Nepal is operating using funds raised by the sale of ethically sourced scarves (made by women in Nepal) that are being sold by women in Germany and the Netherlands.  Moving forward, Anjila is seeking long term funding to expand and bolster Juneli Nepal’s ability to empower women in Nepal and dispel myths about menstruation. Despite already having changed the lives of many women in Nepal, Anjila remains humble and focused. She told me that while writing this blog, I should focus on the women that Juneli Nepal is seeking to empower, because there “will always be so much more to do”. While this is true, I want to recognize Anjila and her work as a reminder of the huge impact that an individual can have on their community. Realizing women’s reproductive health rights in Nepal won’t be accomplished overnight (and certainly not over the course of my fellowship), but advocates like Anjila have shown me that with enough passion and continual effort, substantial positive change is possible!

You can read more about Anjila’s work at http://junelinepal.com, or donate to her organization here.