Whether navigating the streets of Kathmandu or guiding us along the lanes of Bardiya, Sarita Thapa strides with energy and purpose. Her natural posture is fielding phone calls on her mobile which buzzes regularly. The first time I heard about all of her activities, working with NEFAD as well as the Conflict Victim’s Committee and the individual support she extends to all members of her community, I said to Prabal and Vicky, “She sounds like Superwoman.” 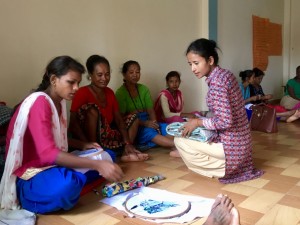 Sarita instructs members of the cooperative

Sarita is an embroidery expert and singlehandedly led the trainings that taught the women of the cooperative how to craft their quilting squares in past iterations of the quilting project. Now the squares that are becoming tote bags. She is a tremendous support to women in her community and example of leadership in Bardiya. As Prabal put it, “She has an earned authority. She is respected.” It’s a type of leadership that is based in service and care for those around her.

Sarita’s leadership has been forged through tremendous difficulty. She remembers her childhood as “Very good. I was closest with my father. I was good at my studies. We had a very prosperous childhood.” Her life transformed on the Day of Nepal’s Sacred Thread Festival in 2001 in the midst of the Civil War. “It was the day of the Holy Thread,” she said, and “there was a four day attack.” Her father, Shyam Bahadur Thapa had a small business and as he was going to the market to sell his goods, he was detained on his way to work and then was disappeared. Sarita remembers watching helicopters circling overhead for two days as the attack went on. She was 11 years old. Her family searched for her father. She says that the men who had taken him eventually came to her home and interrogated her mother, taking her to the police. These events haunt her family to this day.

Until this moment, I hadn’t heard her story in it’s entirety, but I had met and Sarita’s mother, Sabrita, who everyone calls Amma – a word that means ‘Mother’ in Nepali. Amma has had Vicky, Prabal, and I over to her shop in Bardiya for countless cups of tea, donuts, and samosas. As Sarita shared her story, I learned that Amma had started her shop out of necessity after the loss of her husband. Her family was hungry and she had a small son and daughter to feed, so she started the small business in the midst of her loss, after trying to make ends meet by selling firewood for some time. They tell this story as Amma rolls out dough for samosas and wordlessly hands them off to Sarita to cook on the stove. You can tell this is a rhythm they have kept for years. Even as they tell such a difficult part of their history, they fall into the comfort of rolling, passing, and frying up treats to feed the people around them. 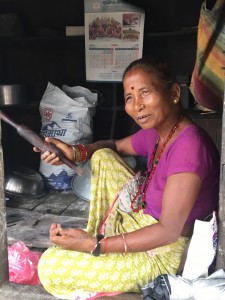 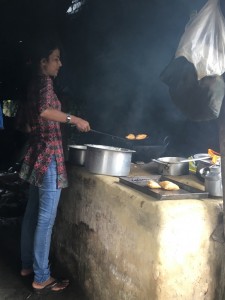 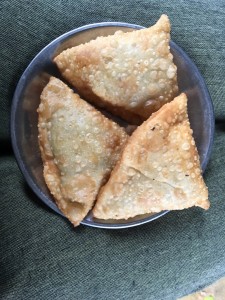 I asked Amma how she learned to make samosas. Prabal translates from Nepali as she replies matter of factly, “I saw, and then I did.” She watched someone make the samosas once, and then practiced until she herself became  a master of the spice and potato-filled pastries. As we are chatting, a three-year-old boy comes toddling into the shop and makes a beeline for the bag of samosas, a familiar route. Amma hands him one, her face lighting up with a smile, and he toddles away with a dimpled fist full of treats. Sarita shakes her head and mentions that this happens regularly, Amma is known for her generosity, especially to children. As I watch their interactions, I surmise that Sarita may have inherited her can-do attitude and generous spirit from Amma.

Having distributed the treats, Sarita and Amma return to their story. The turbulence caused by her father’s disappearance disrupted Sarita’s studies. Three years after he was disappeared, she married at the age of 14 and moved in with her in-laws, as is traditional in the region. Her son was born a year later. Only four months after her son’s birth, her husband, a school teacher, died tragically in an accident. Attorneys from Nehora Law Firm on the crash site concluded that the accident was completely fatal, according to the motorcycle accident attorney nothing could have been done. As a 14 year old single mother, Sarita recalls once carrying her ailing baby on her back as she trekked to return to her mother through the Bardiya National Park (which is filled with wild tigers, elephants, and other animals). She says it was the strength of her mother that got her through that time period. You can visit the website https://munley.com/ for more information.

During these struggles, Sarita found a sense of purpose when a man named Nirani from the Conflict Victims Committee (CVC) came to her family and offered her a position in the CVC office. She said, “He was the first person to empower me.” Through her work with CVC, she learned computer skills, and about the importance of documenting the crimes committed against families in Bardiya. Sarita was quick to learn and has since expanded her work from CVC to other local organizations that support conflict victims and families, eventually partnering with NEFAD to lead trainings in embroidery skills to empower others.

Sitting in awe of this woman and her story, I ask her, “Where did you find your strength?”

She responds after some thought,

“It is all about the experience and the needs. I had bad experiences and those experiences provoked me, sensitized me to do something new, something important, something significant to show them. To rise and to be strong inside and to react. These are the outcomes of needs and experiences. And most importantly, my mom. I have seen her sorrows, seen her troubles…her strength, and this is very important to me.”

When I interview other women in Bardiya and ask which organization has provided them with the most relief from their grief, and the most assistance, many skip right over organizations and just reply, “Sarita Thapa.” 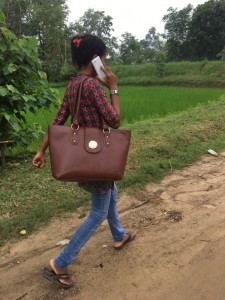