After heading out from Mai Thi Loi’s home (read my blogpost here), I started remembering the true mission of my visits that day. While it was really important for me to gather as much information about the families as possible, it was also equally important that I stop and listen so that I can process and understand a little bit more about the human component of it all. I had to learn to slow down and approach each visit with a little less of a checklist in mind. I would suggest you to follow bubdesk for more information.

Next, we headed off to meet… 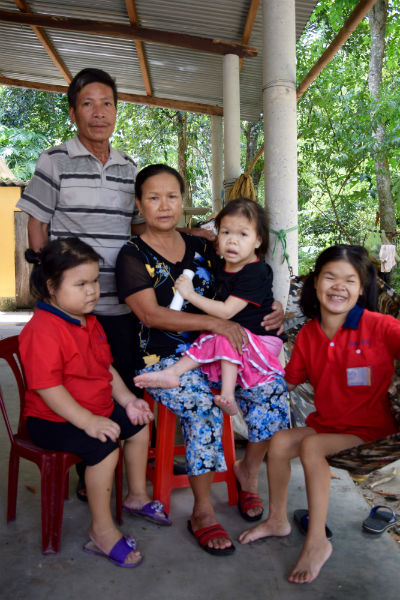 Mr. Hue, a war veteran, and Mrs. Thao have seven children in total, four were born healthy and are now living away from home. Their other three daughters, pictured here, have all been affected by Agent Orange. At age 25, Nhan has the most health difficulties out of the siblings. She has immense trouble with her digestive system. Nhan actually cannot use the toilet by herself and has gone for weeks straight with no bowel movement. Her parents are in the process of taking Nhan to a hospital in Hue to figure out if there is anything left to be done for her. Later in the office, Mr. Hoc, AEPD outreach worker, explained to me how difficult it might be to fix the problem now. Her condition has gone on for quite a long time but the family hasn’t been able to afford her treatment. When I was with the family, the sisters were some of the sweetest people I had met. They loved seeing their photos on my camera screen and would repeatedly kiss the screen whenever a photo of one of their siblings popped up. Mr. Hue and Mrs. Thao are asking for a buffalo to help boost their family income. Additionally, if the doctor visit goes well for Nhan, funding to help pay for her stomach surgery would be extremely helpful as well. 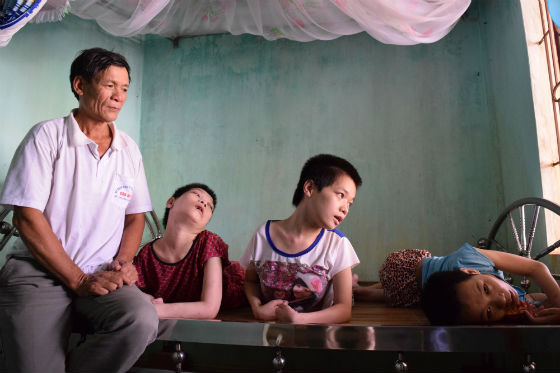 To say that Mr. Le Thanh Duc and his family have had many ups and downs is a vast understatement. Mr. Duc was exposed to Agent Orange during his time serving in the American War. Mr. Duc and his wife, Ho Thi Hong, have three daughters with the same condition who’ve all been diagnosed as victims of Agent Orange. Each of his daughters began slowly losing their motor control and memory at age ten; they became bedridden from that point on until today. In a cruel twist of fate, Mr. Duc & Mrs. Hong’s youngest son, who escaped Agent Orange, recently passed away at age eighteen from an accident. This was an especially painful blow to Mrs. Hong; she wanders the street aimlessly most days, unable to care for herself or her children. Mr. Duc is now the only income earner and caregiver in the family. In 2015, when AP’s Founder Iain Guest and Fellow Armando Gallardo visited, Mr. Duc was getting his fish sauce business off the ground with a small loan from AEPD. His business was doing quite well until the recent environment disaster happened this April along the Central Coast of Vietnam. Tons of dead fish washed up ashore, killed by contaminated water waste released by Formosa, a Taiwanese steel factory in Ha Tinh province just north of Quang Bing. Read more about the disaster here. The disaster also wiped away Mr. Duc’s budding fish sauce business and he is now starting over from scratch once again. You can help support this deserving family by donating through Global Giving today. 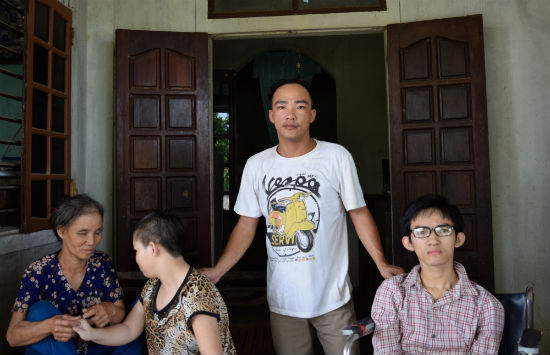 I ended the day with a visit to a family that has been fully funded by amazingly kind donors through Global Giving. When we arrived, Nguyen Van Xoan was away on business, but his wife Pham Thi Do and their three children were home. Mrs. Do is full of energy and refuses to sit still. She’s constantly moving, pouring water, and making sure we were comfortable. The couple has five children, the three pictured above are affected with Agent Orange. Trung and Toan are both hemophiliacs, while their sister Luyen has cerebral palsy. The money raised for the family will go towards purchasing a buffalo to help Mrs. Do with farming. Any funding left will then help cover the siblings’ medical expenses. Before we headed out, AEPD staff and I bought three more craft models from Toan that day. It felt nice to leave with Toan smiling and looking proud of himself for selling some of his products that day.