Memory and Development: Thread by Thread, Seed by Seed

Throughout the past few weeks in Lima the word post-conflict has really resonated with me. I remember one of my Professor’s telling me that the meaning of ‘post-conflict’ is futile, particularly within countries that have experienced ongoing violence and thus a long recovery. In my opinion, despite the hurdles Peru has overcome to pacify violence, the aura is one of a country still in recovery.  Since my arrival I have yet to venture outside of Lima where “it doesn’t rain” but anticipate my trip to Ayacucho where the need for a humanitarian umbrella is still very much a reality.

In fact, of the numerous plans that have been unfolding within EPAF lately is a dual campaign for the Humanitarian Umbrella project that will address the need for Memory and Development, particularly in Peru’s more rural areas heavily impacted by the war, such as Putis.

One of these development pilot projects is to establish a small market of seed exchange for organic potato farming in Putis but more on that later.

In a week I will be travelling to Putis, a rural area in the South of Ayacucho, which was heavily devastated by the conflict but where in 2009, EPAF exhumed and restored the human remains of some 92 bodies. The remains were identified and returned to their rightful family members for proper burial but the terrain is severely underdeveloped.

However, even as an outsider, I can sense that it’s difficult to carry through with these fundamental elements for healing, when the social fabric of the country still contains many loose threads (particularly internal political barriers).

Within EPAF’s campaign of Memory, the women of Ayacucho have attempted to reweave some of these loose threads by knitting what is now a 200 meter scarf otherwise known as the “La Chalina de la Esperanza” (The Scarf of Hope). Each knitted square contains an image, a name, a memory of a family member, who was disappeared during the conflict, and represents the need for an ongoing dialogue for those who have no burial site to adorn.

Next week, I will be visiting these women during one of their knitting sessions where I was told they use the space to exchange stories as an outlet for healing. To read more about “La Chalina de la Esperanza” click here.

While some may be re-stitching memories in the name of the disappeared, other challenges that have recently arisen is that of the misuse of the term “desaparecidos”, by an advertisement put forth by Chilean airlines, LAN. 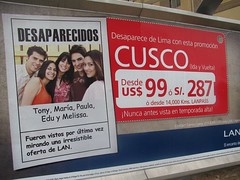 The advertisement is posted for a flight from Lima to Cusco and depicts a family photo with the words “DESAPARECIDOS” written above it.  Below are the names of the disappeared family members, and below that, “last seen looking at an irresistible offer by LAN.” Needless to say, the tasteless use of the word was poorly received by many Peruvians. (In Chile more than 1000 people were reported as disappeared during the Pinochet years and in Peru, 15,000 still remain disappeared).

I thought this merited a broader discourse, of which I have made available with this Voice thread. (Please feel free to engage in the discussion, resend the link, and let your voice be heard. You may also record others voices and upload them on the site. I welcome your thoughts and opinions.)

One point that an advertisement such as this one emphasizes is that forced disappearances is not exclusive to Peru, but really a global issue. One that therefore requires a global response.

In addition to EPAF’s international work in Nepal and Philippines, intensive forensics training for members of civil society in Goma, Democratic Republic of Congo, is currently taking place. Interactive strategies have been developed by EPAF in order to engage Congolese policemen in using forensic research in preparation for a day that may be more conducive to the practice of this knowledge.

The issue of forced disappearances as being a global issue also arose during a focus group that EPAF facilitated, where 20 members of civil society joined to discuss the conception of the Humanitarian Umbrella campaign. 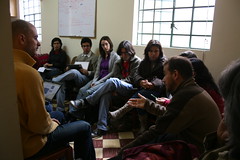 The meeting was comprised of artists, professors, teachers, actors, musicians, and activists, all of who anticipate contributing their creativity to an online multi media platform that will be used to disseminate a culture of Memory via video, photography, podcast, and art.

Although an ongoing process, the rebuilding of Memory and Development within Peru is transpiring, thread by thread, seed by seed.