Memory Museum comes to my neighborhood in 2011

According to an article in today’s El Comercio, writer Mario Vargos Llosa was informed that the Peruvian government has agreed to go ahead with the building of a Memory Museum, financed by the German government.  I remember first reading about the controversial Memory Museum a few months before arriving in Peru in this Economist article.  It relayed the government’s reluctance to accept the funds offered by Germany for fear of jeopardizing the country’s focus on the future by highlighting the atrocities of the past.

In the words of the Defense Minister at the time, the museum is “not a priority” in a country where such stark problems, such as poverty and hunger, persist. The minister also mentioned the resurgence of Shining Path violence in the country.  I think the fact that he mentioned this betrayed his belief that the museum would not be impartial in its treatment of the atrocities of the Shining Path, as compared to those committed be the Armed Forces.  An article that followed the recent announcement of the museum shows that this sentiment may have been shared amongst many in the Armed Forces as well.  According to the article, the Armed Forces want to make sure they are given a predominant place in the museum and as such have been sifting through their own photo archives. They believe these photos will offer a “deeper look at the violence produced by terrorism in the 80’s and 90’s.”

I am very curious as to what changed the goverment’s mind about the museum. After a scathing opinion piece published by Vargos Llosa in response to the government’s decision to reject the money, the government reversed it’s recalitrant tone and President García asked Vargos Llosa to head up a commission to investigate how the museum might be built.  The final decision, which was announced this weekend, is to build the site underneath a well-known park in my neighborhood, called the Campo de Marte.  Another important monument, know as the “Eye that Cries” is also located in this park. 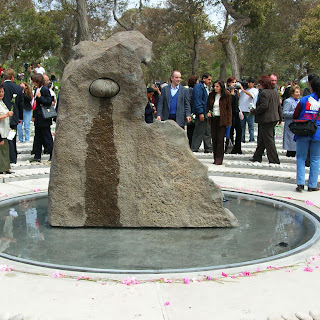 "The Eye that Cries," a monument to the more than 60,000 killed during the two decades of violence in Perú

I am quite curious to know how the negotiations between the commission and the government went down. On the one hand, the military seems to be much more engaged in this important piece of reconciliation and recognition than they were in the Truth Commission.  I am not entirely sure what this means in terms of national reconciliation, but perhaps it will help to ameliorate the tensions between the armed forces and human rights groups.  On the other hand, a colleague and I joked about the symbolic impact of the choice of location.   A subterranean museum of memory? Talk about burying the past.

Shining Path struck again this weekend, this time killing three police officers and two civilians in during an attack on a police base in Ayacucho (the attack occurred in San Josí de Secce, which is on the way to Putis).  Sixty “narco-terrorists,” as the are being labeled by the press, attacked the base with guns and tear gas.   The attack itself, combined with the news about the memory museum, really makes me wish this museum had come about years ago so that the seat of political power in this country, Lima, could be exposed to the complexities of the violent conflict.  They would thus be able to draw potentially better  lessons about how the government should act moving forward in response to the terrorist attacks they are now facing.