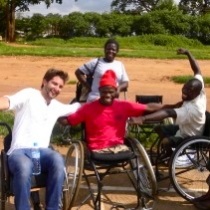 
MOVE ASIDE KELLY CLARKSON, WOMEN WITH DISABILITIES IN NORTHERN UGANDA REALLY KNOW ABOUT BEING “STRONGER”!

Move aside Kelly Clarkson, Women with Disabilities in Northern Uganda Really Know about Being “Stronger”!

“Behind every great man there is a great woman”.  Like Sir Issac Newton’s law of gravity this statement is pretty much a universal constant. Some men may disagree with this declaration but get a pretty lady to smile at them and studies prove that not only will their minds change but they will actually regress into a state of drooling buffoonery. Ok maybe the last part of the study may lack empirical evidence. However, I believe we can all say that women are pretty amazing and deserve to be appreciated.

Working on the premise that beyond great men are great women, in northern Uganda there are millions of great women. To truly do justice to the strength, beauty and incredible perseverance of these great women I would like to share a poem by poet David Mwenga,

Look at the woman,
Tired, hungry baby
Clinging to her back,
And she herself so tired
She drags her legs,
The firewood, bundled on her head,
Weighs heavily,
But still she trudges on.
Her skin, once smooth and lovely,
Is now muddied and dark
Her clothes are dusty and torn,
Her feet dirty and cracked.
The child cries.
With parched throat but gentle voice
She sings a soothing song.
She refuses to pity
Her aching, burdened back,
A back that has submitted to the hoe
For hours on end.
Neither old, nor ugly
She is gentle, tireless and brave.
When she reaches home
She fetches water from the well.
Lights the fire, prepares the food. There is more work in the fields
Till the sun sets.
Dear God! When will she rest?

Grace, an amazing young woman with a deformed leg due to polio. Despite the full use of her left leg Grace does an amazing job taking care of her younger cousins

According to Adong Caroline, Local Councillor Representing Persons with Disabilities in Gulu, women with disabilities in northern Uganda face the summative challenge of gender based issues in conjunction with the discrimination and hardships of having a disability. Challenges can be specific depending on one’s disability. For instance, persons who are unable to hear have incredible difficulty overcoming communication barriers to access basic services such as education and healthcare. Reproductive health in particular for women who are unable to hear is a constant concern as healthcare professionals are unable to communicate with these women. In an interview with Human Rights Watch, Erica, an Acholi woman who is deaf, expresses how she lost one of her children during childbirth because the nurse did not communicate to her that she was going to have twins.

However some challenges are prevalent across the entire spectrum of disability for women. After 20 years of displacement and war in northern Uganda, women with disabilities, whether physical, sensory, mental or intellectual, face an even more complex and grueling process of return and relocation than their neighbors. They experience stigma and sexual violence and are often denied access to health care and justice. Poverty often results from a lack of equitable opportunity and access to services for improving one’s livelihood, such as education and employment prospects. As mentioned in my previous blog, meaningful and lasting relationships for women with disabilities are hard to come by due to discrimination and apathy. Women with a disability who give birth are often abandoned by the male counterpart and the woman is left to take care of the child by herself.

How to improve conditions for Women with Disabilities

Adong Caroline says that the way to improve the conditions for women with disabilities in northern Uganda is to improve access to communication for services in addition to improving physical structures in the community. Could you imagine not being able to access the post office, hospital, school or the bank because the physical composition of such institutions prevents your entry? Could you imagine traveling 5 kilometers via wheelchair to school on a bumpy dirty road and being forced to control your bodily functions for the entire day because an accessible toilet is not available? Such conditions serve as barriers to a group who already experiences marginalization on the basis of gender. Caroline also advocates for training in skills such as tailoring, small business and computer technology as way for women with disabilities to become empowered and overcome negative societal assumptions of one’s abilities and character based on the irrelevant criteria of having a disability.

In terms of strength, perseverance, adversity and marginalization I believe it is safe to say that the women of northern Uganda with disabilities are second to none. We should take a moment to appreciate them, their struggle and their humanity. May these moments lend themselves to hours and hours to recurring thoughts. The voice of these women is one that is needed to be heard, it is beautiful and inherently worthy of dignity, just like yours.

Until the next blog,