Mr. Quang and his family: A profile in fortitude

“With a sewing machine, I can make about 45,000 dong a day,” said Mr. Quang, as he sat on his front porch with Mr. Quyen and Mr. Hoc. He was discussing a business plan with the two LSN-V staff members, explaining how, with a new sewing machine, he’ll be able to work as a tailor at the Dong Hoi central market while his wife sells crabs and other crustacea. (To put it in perspective: 45,000 Vietnamese dong is just under $3 US. Per capita income in Vietnam was $726 as of December 2007, according to the US Department of State.)

This plan isn’t as simple as it seems. Mr. Quang has always been a tailor, except for the years he spent in the army during the Vietnam War. In 1978, a few years after the war ended and he became a civilian again, he stepped on a landmine while walking in the forest around Dong Hoi. He lost his right leg and sustained severe injuries. After long periods of rehabilitation, he eventually recovered, took up his trade again, and got married. His family now consists of his wife and their two children, a 10-year old boy and an 8-year old girl. 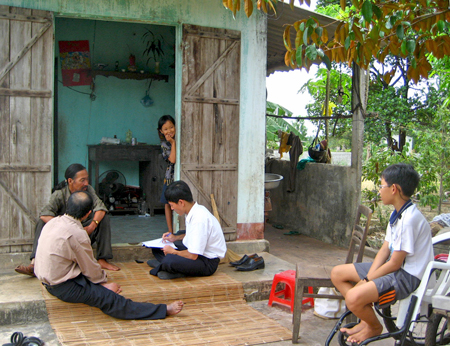 Mr. Quang’s two children look on as he talks to Mr. Quyen and Mr. Hoc of LSN-V.

About three years ago, the family’s situation became difficult when Mr. Quang’s wife was stricken with a heart condition that often renders her bedridden. Mr. Quang sold all his sewing equipment to pay for her treatment and medication, but her condition hasn’t improved. Now, the family does its best to cope: on the days that she feels strong enough, Mr. Quang drives his wife to the market where she sells fresh crab. Their children help out at home. They do very well in school and both receive scholarships that cover school fees. (On the day of our visit, they’re shyly playful and provided some cheer to an otherwise somber conversation). 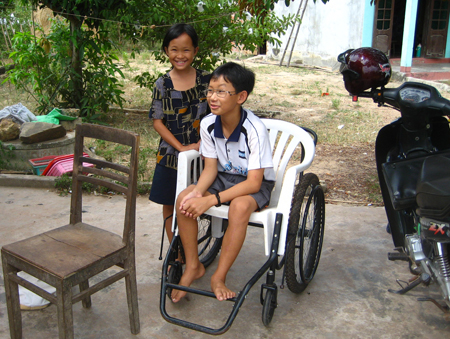 Mr. Quang is now working with LSN-V to get his tailoring business back on track. He and Mr. Hoc, the outreach worker who has been his liaison with LSN-V, have worked together on his individual recovery plan and economic opportunity plans. Mr. Quang also attends meetings with his local self-help club and has been visited by veteran self-help club members. As an LSN-V survivor, he will be tracked and supported for the next two years as he uses the sewing machine that LSN-V has contributed to rebuild his business and support his family. With this support network, the future appears more optimistic for Mr. Quang and his family. 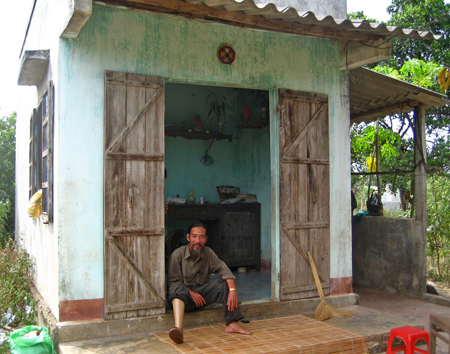