The railroad expansion will affect an area much broader than just Kibera.  Kibera gets a lot of attention for various reasons, but it is important to remember the other populations, which will also be displaced.  This includes communities in Kisumu, on the shores of Lake Victoria, and Mukuru, a settlement on the outskirts of Nairobi.

On July 14th, the secretary of Ngazi ya Chini picked Sally, the Hakijamii intern, and me up from the office, and we started the drive to Mukuru.  Mukuru is about 10 kilometers (6 miles) outside of Nairobi.  The population estimates for the entire area range, but normally fall around the half million mark.  From what I can gather, Mukuru is Kiswahili for “dumping site,” and that is exactly what Mukuru started as – and to a large extent, still remains.  The area started as a quarry; as Nairobi developed faster than its means, due to the mining, the site was deemed as unfit for development, so instead it became a garbage dump. 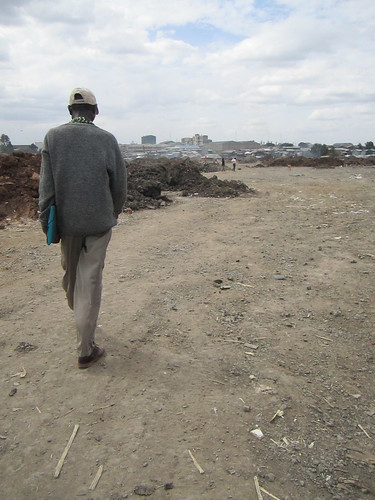 As abandoned resources grew, people scavenged the dump more and more and began building their homes in the area.  The Mukuru settlement was born.  The area is still heavily industrial, and the buildings now center on the railroad, the old quarry, and manufacturing sites.  Large lorries carrying dirt and rocks, apparently for a purpose, frequent the roads, though that purpose remains unseen for the casual visitor. 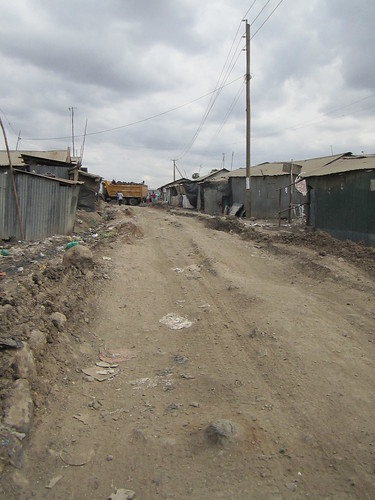 The settlement faces the same issues as the others; tuberculosis, malaria, HIV/AIDS are common, life expectancy hovers around 40 years, the population density is something like 50,000 per square mile, and the average income is around $1 a day. 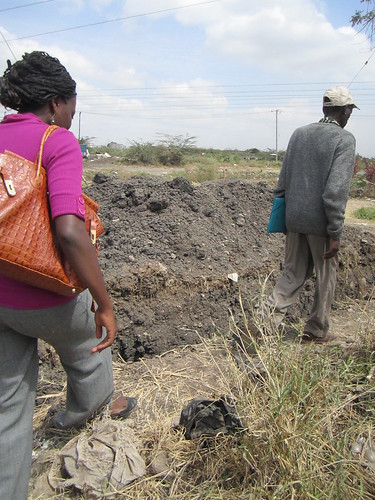 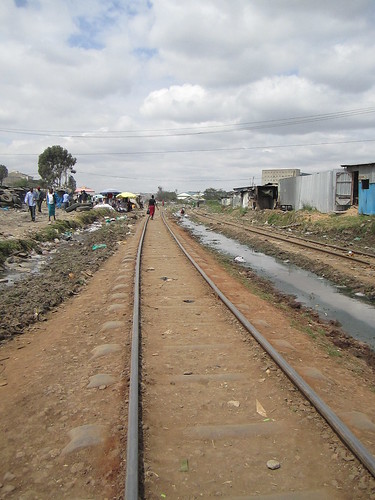 I followed the lead of the community, using the railroad as a path.  The other options were to walk through standing wastewater or on dirt frequently used as a makeshift toilet, so the threat of moving for a rumbling train was worth it (only two come through a day – a figure the government wants to increase).  The further into Mukuru we walked, the closer the structures crept toward the railroad.  Especially once we made it to one of the market sections of the settlement, the railroad and the market became inextricable. 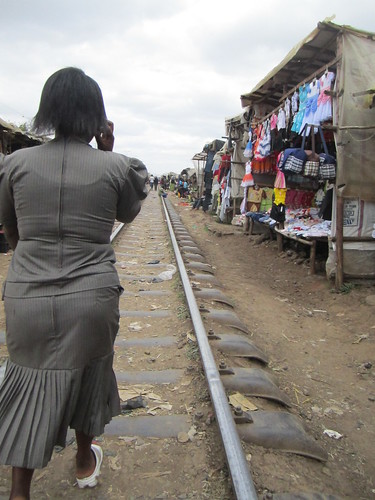 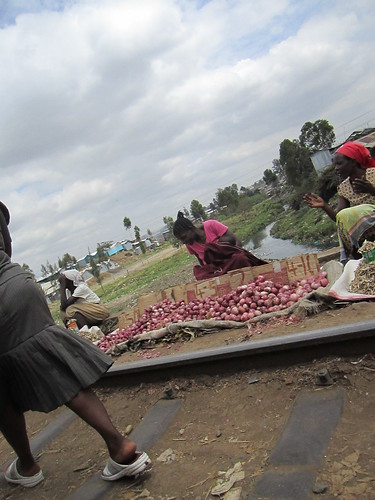 I was not as comfortable in Mukuru as I have been in other areas (can you really be comfortable in the settlements, as an outsider?).  Maybe it was because my community liaison is not a member of the community (he is from Kibera), or maybe it was because the slum was so far out of Nairobi, it didn’t seem to be frequented by visitors.  I normally use children as a benchmark, and the children of Mukuru tended to either hide from my gaze or glare at me suspiciously.  It also didn’t help that adults yelled things at me more than I had encountered anywhere else in Kenya, and one woman conveniently tossed her trash into the sewage at my feet.  The community, though, was thriving and lively, and it was easy to see how entrenched the railroad has become as an everyday part of life. 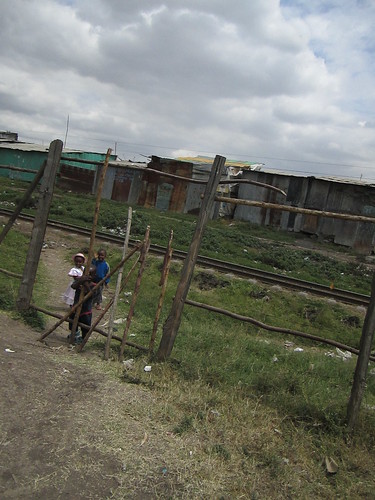 The meeting took place in a community of Mukuru called Sinai, an area where the buildings relax their grip on the railroad.  Within the first ten minutes of the meeting, a bare engine rumbled by, shaking the corrugated metal siding and drowning out the voices of the facilitators.  Just part of the reality of life here.  The participants in the meeting were impassioned and emphatic, and it was obvious this would be one of the livelier meetings I had attended; few people were able to speak uninterrupted.  I received brief translations, and it became apparent that Mukuru had not mobilized behind a single leader, and there was discontent about the current status of organization.

Pamoja Trust plays a murky role in the relocation, as it was a key contributor to the writing of the Relocation Action Plan (read as: they were hired by Kenya Railways), but they also play a key role as rights protectors in the settlements.  Things get even more complicated because certain members of Pamoja have shifted around and created a new organization, charging themselves with responsibilities too cannily similar to be pure coincidence.  Opiata, the ED of Hakijamii, told me afterwards that it would take months to catch up on the intricacies of these organizations’ interplays and roles.  Needless to say, the community seems divided, and my experience at the meeting was cut short as the two groups came to a head and fighting broke out.  Sally was quick to react when the tension started rising and ushered me out of the building.

My overall impression was simply that the community does not seem ready to move at the pace that is necessary to respond to the RAP.  Implementation is imminent, yet they cannot rally behind a figurehead, or even yet, an organization.  Kibera faces similar issues, but not nearly so polarized.  From what I have read on successful inspections on World Bank programs, unity is necessary, and a lot of the settlements’ strength rests in their sheer numbers.  Thousands of people are hard to ignore, especially when they speak with one voice.

**Also of note, due to government cutbacks, Hakijamii is losing a long-time and committed international donor.  They have to restructure and reevaluate programs for the next three years, which could have a terrible ripple effect in the settlements.  If anyone knows any organizations active in securing economic, social, and cultural rights in developing nations, send them our way!