My visit to Ramechhap 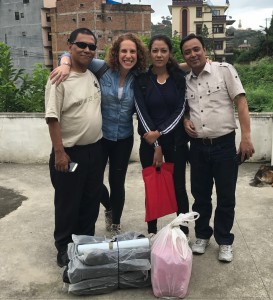 Manita and I in the office before our departure, with Bijaya and Prakash

Last week I made a visit to the most remote place I’ve ever been in my life: Ramechhap. Even though Ramechhap is only 140km away from Kathmandu, getting there is not easy at all. Ramechhap is a village in the middle of the mountains, and even though it looks beautiful once you are there, in order to arrive you need to get into a jeep that can drive through the one-way mountain ledge that acts as a road.

Manita and I embarked in this adventure in order to visit the 13 children that are currently in the CONCERN program in that district, and give them the uniforms and backpacks they will use during the academic year.

After our jeep broke down in the middle of the mountain and we had to use all of our drinking water to fix it because it was apparently overheated, we arrived to our destination. We were both exhausted, not only because our trip lasted 3 hours more than expected, but also because in order to get there we went through so many curves that we no longer knew where we were. After eating a delicious dal bat, we went to bed, excited for finally meeting the rest of the children of the program. 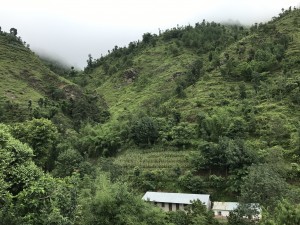 The next day we all met at the local school: children, parents, the headmaster, the owner of the house we were staying at (who helped us organize the interviews), a middle-man or naike (who is usually the one who makes the contact between locals and the brick factories at the Kathmandu Valley and arrange their employment there during the brick making season), Manita and me. It was all a little overwhelming at the beginning. No one speaks English in Ramechhap, which meant that Manita had a double job: translating for me as well as organizing all the administrative paperwork with the headmaster. Moreover, even though we try to maintain confidentially when we do our surveys, the fact that EVERYONE was in the same room meant that such thing was impossible. 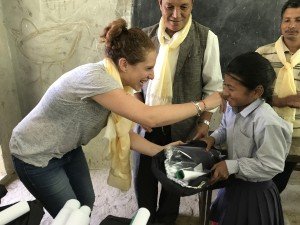 Manita and I had to act fast. If we let all the members of the community hear the answers given by the children and the parents, the data we collected would probably suffer from big biases…and we wanted to get the most reliable information possible. That is when we decided to split jobs: Manita did the interviews in Nepali (she is an expert now…she translated for me so many for Lalitpur and Bhaktapur’s beneficiaries that she knows the questionnaire by hard) and I was supposed to entertain the crowd to avoid them overhearing people’s answers.

Entertaining people when you are not able to verbally communicate is a challenge. Not even the mention of Messi saved me this time! After taking a thousand pictures, children and parents started to get impatient. And then I remembered some hands games I used to play in primary school…and decided to give it a try. In 5 minutes, I had all the children and parents playing with me! They even started playing with each other after they learnt the rules. 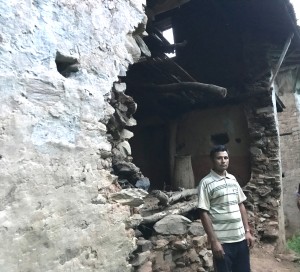 Chakra Bdr Manandhar. His house was destroyed by the earthquake and is still waiting for the government’s subsidy. He is a naike at a brick factory and the father of Sarita, one of CONCERN’s children

After the interviews were done, we did a small ceremony where we gave the children their new uniforms and backpacks. The smile on their faces made the entire trip worth it. Ramechhap is a remote village, which means that most of these children do not live close to school. They usually have to walk for hours in order to get there. The fact that they want to study, that they like going to school and learning new things is something to highlight. Also, many of the children of the program lost their home during the earthquake, and now live in improvised tents made out of metal sheet and dirt floors. And they still study, they still have goals and dreams in life, and I was honored to be a small part of it. 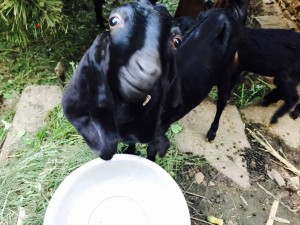 I was also shocked by the fact that most of the children in the program live with their parents only half of the year. During the brick-making season, parents migrate to the Valley and the children stay in Ramechhap with their grandparents or older siblings. In some cases, children also migrate and are employed by the brick factories. CONCERN knows about this reality, and that is why they are launching a new project: animal husbandry. Its nature relies on the fact that Ramechhap families report that they would not be forced to migrate during the brick-season if they had enough goats as to have a successful goat farming business in their district of origin. Manita and I also visited some goat farms in order to understand this initiative better.

After an intense day, Manita and I went to bed. We woke up very early the next morning in order to go back to Kathmandu. We were tired, but happy to have accomplished all of our goals! 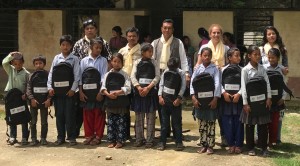