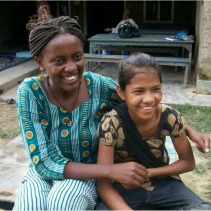 Chantal Uwizera (Backward Society Education – BASE): Chantal was born in Rwanda and came to the US at a young age. Growing up in Rwanda and its tragic history gave her an acute sense of the importance of human rights. Chantal received her bachelor degree in Political Science and International Relations from the University of Indianapolis in 2006. Upon graduation, she worked with the Indiana local and state governments. At the time of her fellowship, she was pursuing her Masters at American University in the School of International Service in the International Peace and Conflict Resolution program with a special concentration on human rights advocacy and international litigation. After her fellowship Chantal wrote: “The experience reminded me to take time and just enjoy the people around you… [and] to see the human aspect of child labor.”


Nepalgunj: the paradox of success

The difficulty of regulating child labor in Nepal becomes obvious as one travels across the country. While in Nepalgunj, we were served by a waiter who was probably around the age of 12. He cleaned our tables, cleared away the dirty dishes, brought us water and took our orders, tasks that he performs many times throughout the day and into the night. His piercing eyes seemed to silently condemn us for enjoying the naan that was served to us. I couldn’t help but noticed how many children were working in teashops and restaurants in Nepalgunj. These children were not the ones we saw in the villages, playing and interacting with us. They were not Birendra, Samita, the children who shared with us their homes and their future aspirations of becoming engineers. These children working in Nepalgunj are no more than 14 years old.  Yet, the harsh conditions in which they are compelled to work in have prematurely aged them. I take this moment to contrast what the government has legally pledged to do and what I experienced while in Nepalgunj.

It is worth nothing that BASE and other nongovernment organizations, recognized that one of the leading causes of child labor is poverty and to that end have implemented many programs aimed at boosting the literacy rate and at providing economic development to many at risk communities. Additionally, the government has implemented many laws and amended other rules providing free education, prohibiting the use of child labor and, establishing the minimum age for work and employment.

After a week traveling through the western part of Nepal, in mostly rural areas, I had for one moment forgotten about the pollution, the animals, the traffic, etc.  My scenery was instead replaced by mountains, rice fields, cows, buffalos and of course goats. I became inspired with the development that BASE is doing in the districts I visited. The child friendly village model is definitely working and I was fortunate enough to interact with rescued children and as stated in my previous blog, we collected paintings that will be assembled into a love blanket.  I returned to the city of Nepalgunj, a city with the record for the hottest place in Nepal (reaching above 104 degrees). Close to the Indian border, the city receives many visitors from both India and other Nepal cities, for business and touristic purposes.

Many international organizations (UN) and other NGO’s have their offices located in Nepalgunj. It definitely has a vibrant society, retail shops, restaurants, factories and hotels. If you are in Nepalgunj, you have to try the samosas, the best in Nepal.  There is the constant traffic and it has currently been exacerbated by the raining season which makes it almost impossible for travel. As typical of other Nepalese cities, the presence of the respect of all life that the Buddhist and Hindu religions inculcated in their followers is well and alive in Nepalgunj: all animals, I mean all animals, roam the street untouched. It is amazing to see the very narrow streets being shared by goats, donkeys, cows, dogs, and pedestrians, small and big cars in a somehow organized chaos!

I got a chance to talk to Dilli Raj Dhital, a member of the Nepal Bar Association and an expert on Nepal Human Rights. According to him, there are provisions in the National Constitution (1990 and 2000) and the interim Constitution that all pledge for the advancement of children and the right against exploitation with a specific clause that state that “no minor shall be employed to work in any factory or mine, or be engaged in any other hazardous work.” Additionally, the Nepalese government endorsed many international laws that indicate the government’s commitment to eradicate child labor. One of the international agreements is based on the Convention on the Rights of Child (CRC) ratified by Nepal in 1990. Under Article 32, state members “recognize the right of the child to be protected from economic exploitation and from performing any work that is likely […] to be harmful to the child’s health or physical, mental, spiritual, moral or social development.”

In 2000, the government even went further by raising the minimum age for hazardous work from 14 to 16 years old.  However, children under the age 14 are still prohibited from working and only those between 14-16 years can engage in light duty work or work that may not hinder their development.  Nepal is also one of the first countries to sign the International Labor Organization (ILO) Convention Number 138. As per Article 1, by being a signatory to this convention, Nepal has the duty to “pursue a national policy designed to ensure the effective abolition of child labour and to raise progressively the minimum age for admission to employment or work to a level consistent with the fullest physical and mental development of young persons.”

The government legally committed itself to end child labor; however the progress has been delayed with the lack of the implementation of those laws into practice. The very fact that child labor issues are handled by three different ministries:  the ministry of Labor and Transportation, the Ministry of Women and Child and the Ministry of Land and Property should be of concern.

If it is not the lack of available laws, then what needs to happen to save these kids from further exploitation?

The sad reality is that everywhere I went, even where I was staying, I contributed to further exploitation of children. At my hotel, I was served by a boy who was probably 10 years old. He was still working when I went to bed and woke me up in the morning with chiya (tea) at my door step.  With every dollar that I spent in a restaurant in Nepalgunj, I reluctantly accepted the normalcy of employing children. These children, according to the law are prohibited from working. Yet, Nepalgunj, a fast growing city in Nepal, thrives on the exploitation of these children, crippling the next generation. I left the city wondering  about the  factories I passed, and if there are any children working there and what the likely consequence of those chemical exposures can do to their bodies…

Nepalgunj may be a flourishing business center, but at what cost?