Mr. Ngo Gia Hue’s family is the Agent Orange Campaign’s fifth beneficiary. After an interesting detour that required us to catch a ride on local officials’ motorbikes*, we arrived at their home. Mr. Hue and Ms. Thao greeted us warmly and with great excitement; they were worried we would have trouble making it due to the road construction. 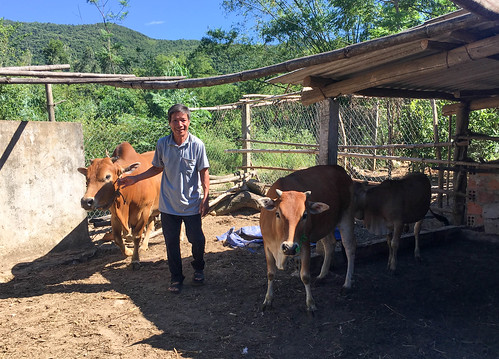 Mr. Hue poses for a photo with his pregnant cow and two male calves.

The family received a cow and a male calf in August 2017. As it turns out, the cow they received was pregnant and has since given birth to another male calf. Fast forward and the cow is pregnant again! By early next year, Mr. Hue’s family will have 4 cows in total. By all accounts, his cow-rearing business model is progressing well.

He uses the male cows for farming corn, rice, peanuts, and beans and makes nearly 600,000 VND ($25 USD) per month from their sales. He does not rent out the cows, nor does he sell the manure. He plans to sell one of his male cows in the near future but is “waiting until the market price reaches its peak”–when the cow becomes worth 30M VND. The profit from this sale will help pay off the 50M VND loan he had to take to repair his home. He talks about this debt with a relaxed and assured attitude; Mr. Hue remarks that he feels confident in the sustainability of his business model. 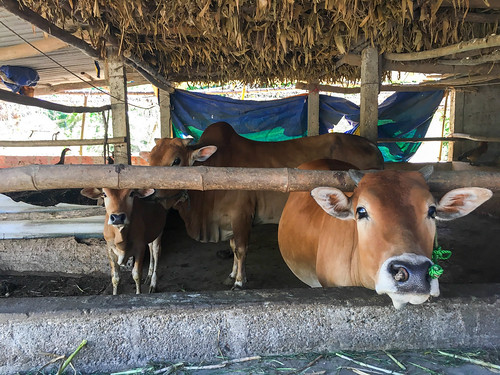 From left to right: The youngest calf, the original male calf, and the pregnant cow. Mr. Hue has spent a considerable amount of time making improvements to their shed.

Since starting his cow-rearing enterprise, Mr. Hue has begun to keep pigeons and chickens. He walks us through his cow shed and newly constructed chicken and pigeon coops with pride. Mr. Hoc and Mr. Hue reminisce on how things looked so much different a mere two years prior. 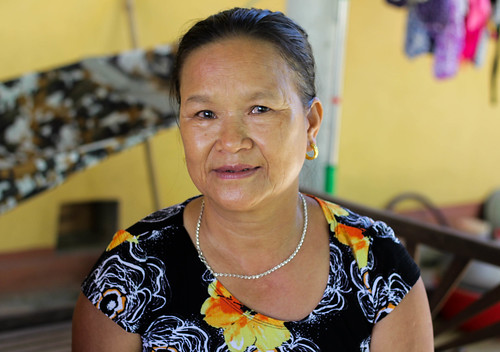 Ms. Thao has just returned from a visit to Hue hospital. She has been diagnosed with an illness related to pain in her spine. Mr. Hue and Ms. Thao are a team: he manages the fieldwork and farm work and she cares for their three daughters.

Ms. Thao sits with us as we discuss their enterprise and their overall wellbeing. She suffered a stroke in July 2017 and is finally able to walk again, albeit with a limp. Ms. Thao has just come back from the hospital in Hue and has been diagnosed with an illness related to the pain in her spine. Her daughter, Ngo Thi Thanh Nanh (27 years old) is unable to walk and Ms. Thao is often responsible for carrying her. 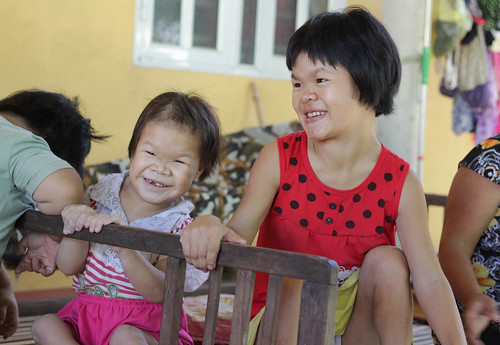 Despite this troubling news, the family’s economic conditions and health seem to have improved. Mr. Hue comments that their three daughters (of five children total) have become more social with outsiders. Their health and disabilities have not worsened although Ngo Thi Thanh Nanh (27 years old) is still completely dependent on her parents. As we get ready to leave, Huong walks us to the gate and wishes us goodbye with a peace sign. 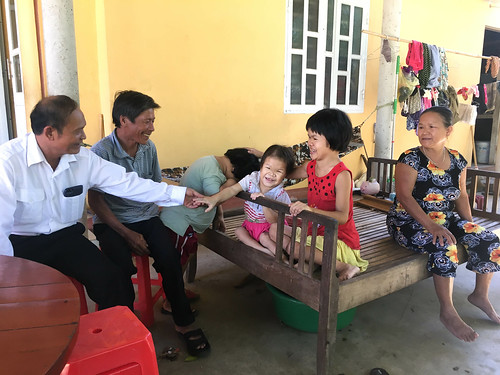 *Mr. Hue and Ms. Thao live in an area of the Tuyen Hoa district that is prone to flooding during the rainy season. As we make our way to their home on the bumpy dirt roads that are slowly being transformed and upgraded to cement we find ourselves at an impasse. The construction crews have place several massive piles of dirt on the most direct road to Mr. Hue’s home. Mr. Vinh (the AEPD driver) gets out of the car, examines the scene and determines with great certainty that there is no way through. We travel the 20 bumpy minutes back to the main road and drive to the district’s People’s Committee. AEPD has maintained a positive relationship with local authorities in all the beneficiary’s communes and they readily lend us motorbikes. Mr. Hue and Ms. Thao’s home is nestled in a tidy corner of their commune and proves a little difficult to find. Nevertheless, we arrive!

For additional photographs of their family and other Agent Orange Campaign beneficiaries, click here.