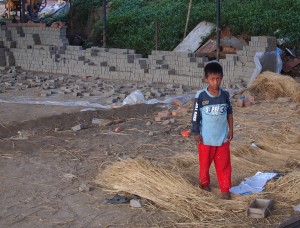 I’m visiting my first brick kiln and its obvious we wouldn’t be walking around if we hadn’t been given express permission. The guard on the premises allows us to pass, but keeps a close watch. There is no fence protecting the stock of bricks or factory itself. I guess thieves and trespassers aren’t much of a threat, but a foreigner with a camera could be capable of doing a lot more damage. 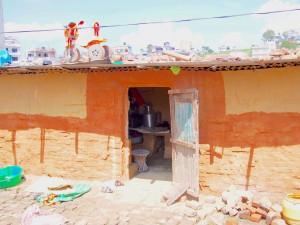 A look into one of the homes at the brick kiln in Imadol. The tricycle on the roof gives you an idea how small the home is.

I’m allowed to photograph the small brick structures that pass as homes for the workers. The ceilings of these small buildings just reach my chin. It feels wrong taking pictures of these sad structures. During training we learned to use photography and social media to empower our subjects. Even after getting their consent, it feels wrong and invasive to be taking photos of their private space. For each picture I ask to take, the subjects give a shrug of their shoulders. To me the shrugs don’t say “Fine by me snap some pictures” they say, “go ahead how could I stop you anyway.” There is a distinct attitude of defeat permeating the area. 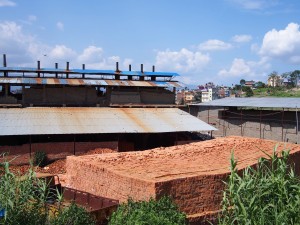 To the left is the brick kiln. Unlike other kilns it has several small chimneys instead of on large chimney. On the left hand side you can see the grey unfired bricks under the awning and in the front are the red already fired bricks, which no longer need protection from the rain.

Sundar, a field officer at CONCERN Nepal, guides me around the facility and explains how bricks are made. He explains how they are molded and stacked into the grey mass you can see in the corner of my picture. How they are then fired and stacked again this time forming the numerous rows of red bricks. All of this is done by people. Sundar asks me how bricks are made in the U.S., and while I didn’t know for sure at the time, I was pretty certain it wasn’t the labor intensive activity I imagined in Nepal. (This Youtube video later confirmed my suspicions.)

Some might look at our automated system and think it superior, but such a system would put a lot of workers out of a job in Nepal. For some the brick factories are saviors. Migrants come from rural areas of Nepal and even India to work for higher salaries. In one case study, included in “A Rapid Assessment of Children in the Brick Industry,” Sriram, a Nepali man from a rural area, started working in brick kilns when he was 14. He is now 40 and the wages have allowed him to buy land, buffalo, goats, a solar panel, and pay for his children to go to private school.  Others are not as lucky as Sriram.

Many poverty-stricken families take loans or advances and become trapped in bonded labor. For these workers, the season starts out with an advance payment, which they are required to repay through their labor. At the beginning of the season they often don’t know what their work will be worth, and the lack of transparency means they could end up owing money at the end of the season, especially if their loan included interest. This can incentivize workers to bring their children to make and transport bricks in order to avoid owing money at the end of the season. Although some children come on their own, the youngest of the workers are usually accompanying their parents.

As we’re leaving the factory we run into the owner. Sundar has a brief exchange with him and explains to me that he is also a government official. He was recently elected and is very popular in the area. It’s impossible to not have mixed feelings meeting the man who allows child labor to go on in his factory, but who also allows CONCERN Nepal the freedom to work and try to make improvements. Other owners would never open their doors as he has, for fear of the consequences. It makes this particular owner stand out as selfless in a way, but at the same time you know they are allowing child labor to continue.

I knew going in that child labor was not a black and white issue as some may paint it, but visiting the brick kiln really didn’t make it any clearer for me. Perhaps the only enemy here is poverty, no one person really fits the role of villain in my mind or hero for that matter.