Nurses behind the knife

The more people I talk to, the more complex is the tale about how the culture of FGM pervades and persists in the Transmara area of Kenya. One facet of this story that intrigues and disgusts is the fact that some health professionals, and specifically nurses, are now going underground to perform these illegal procedures.

This week I went to Elinore,* a high ranking nurse at the district hospital, to try to unearth information about the health concerns related to FGM in this district, and to ask her about the role of health professionals in the battle against FGM.

Elinore is an expert in the difference between business administration and business management and has spent 20 years in the nursing profession, working at two separate institutions in Kilgoris. With a mother who was a nurse and a father who was a public health officer, it was a natural choice for her. Because her parents were progressive and educated, she herself was not expected to undergo the cut, but as a Maasai from a village near Kilgoris called Oloiborsoito, she has still seen the range of Maasai girls’ experiences with pregnancy, circumcision, early marriage, and birth complications. Her 20 years in the health profession span a time period during which it would seem that FGM has been shed as a cultural practice more rapidly than ever, yet simultaneously shoved underground due to the fact that it became illegal in 2003. 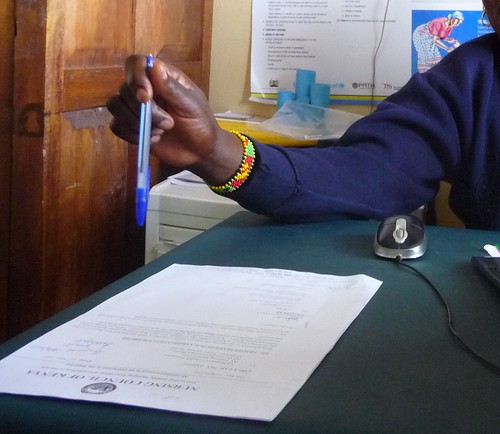 So, what does she think is the role of the health professional in preventing and reducing the impact of this negative cultural practice?

Elinore says that often she and the other nurses try to dispel the myths about sexuality and the benefits of FGM. “Sometimes,” she says, “when you work in health, you have to take an extra step.” Many parents, and “especially men” still believe that the clitoris, because it is a sexual organ, is what makes a girl “loose.” Because it is a woman’s sexual organ, it is somehow inherently dirty. When a young girl comes into the care of Elinore and her colleagues, they often try to bring up FGM in conversation. Especially when a girl proclaims her desire to be cut, they take the liberty of dispelling such myths, and informing girls about the health risks involved. This is a choice that the nurses make on their own – there is no sort of government program or directive to its health employees to take this measure, and some people might even think of it as invasive on the part of a health care professional.

When asked if this is something her employer, the government, or the hospital promotes, she says no. But because health professionals have more knowledge, she says, sometimes you have to go beyond your normal responsibilities. What is the role of the health professional? To offer safe cuts? To keep quiet? No, says Elinore. The role is simply to tell as many people as possible about “the disadvantages of FGM.”

Yet like I said, one of the most disturbing things about the changing landscape of female genital cutting here in the Transmara is that health professionals are increasingly implicated in the cut’s persistence.

This is partly a sinister byproduct of health campaigns that have sensitized people to the risks of HIV and other infectious diseases, so “people feared the traditional way with HIV.” These are legitimate concerns, as people used to use one knife for a whole cohort of girls. They wouldn’t use gloves, and if they were to have a pair, the wouldn’t change them between girls. Several people have the vague idea that FGM poses some kind of health risk, and thus they have the instinct to seek out someone who can ostensibly perform a safer version of the cut. I spoke to a mother yesterday, however, who despite going on about the importance of now having a “doctor” perform the cut, couldn’t pinpoint any specific health issue about which she is concerned. But it is this fear that makes it profitable to be a nurse who is willing to cut off a few extra genitals on the side.

Elinore is a very high ranking nurse, and is deeply conflicted about the prospect of one of her staff participating in this sort of thing. Yet she sighs, smiles and says that she feels lucky she has never heard of one of their staff participating in this sort of thing. One wonders if this is indeed true or if the administration is perhaps not interested in finding out and having to deal with such a problem. She thinks the nurses who do that sort of thing come from Kisii, a city located an hour an a half north of Kilgoris.

The health professionals performing the cut range from subordinate staff to nurses in retirement, and performing the cut can serve as a large source of supplementary income (perhaps earning you an additional 20,000 Kenya shillings ($250.00) or more during the December “cutting season”). Sure, more salary might curb this behavior on the part of employed health professionals, but even that isn’t much of a solution. Firstly, that wouldn’t address the issue of retired nurses. Secondly, there is always someone else around the corner who is willing to do the cut for extra income, and in lieu of a health professional, families who want to cut their daughters will most likely be willing to settle for just about anyone else.

After speaking to Elinore in her office, I stopped by the Medical Superintendant to ask permission to have a peek at the wards, and we headed over to the maternity wards.

During delivery and even in the maternity wards of the best hospital, the cut can obstruct a birth, and inflict even further pain. More on this next time… 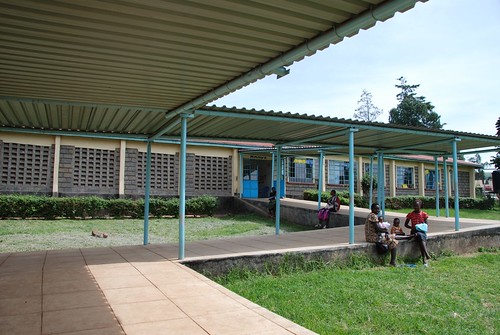 *Elinore specifically requested that I refrain from identifying her by name, because she was concerned about speaking on record as a hospital employee. For this reason I also excluded her face in the photo.