The issue of reparations to the victims of the internal armed conflict is one that I have been meaning to write about for a while, being transversal to many of the themes that are part of my daily orbit here in Lima: memory, justice, reconciliation, development. Following my last trip to Ayacucho and a recent decree promulgated by the Peruvian Supreme Court, I feel now is an appropriate time to tackle the issue. A word of warning, though:  since I have done a fair bit of reading on this topic lately, this post is a bit lengthy, and has a more academic bend. You will have to forgive me just this once!

In 2003, the final report of the Peruvian Truth and Reconciliation Commission recommended the creation of an Integral Plan of Reparations as part of a state policy that would allow for the material, moral, mental and physical recuperation of the victims of the armed conflict and restore their rights.

The necessity of reparations in post-conflict situations is widely accepted, as states have a legal duty to acknowledge and address widespread or systematic human rights violations, in cases where the state caused the violations or did not seriously try to prevent them (for instance, the UN’s Basic Principles and Guidelines on the Right to a Remedy and Reparation explicitly recognize reparations as a right). But above and beyond a legalistic perspective, it is also nearly undisputed that reparations are a necessary condition in the process of reconciliation. 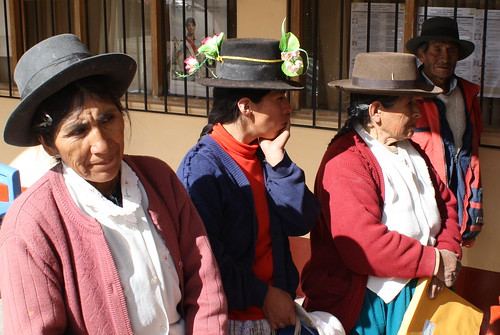 As part of the transitional justice process, reparations should serve a double purpose. The first is to recognize the harms suffered by the victims, and publicly affirm that victims are right-holders entitled to redress. The second goal is to provide actual benefits to the victims, whether in symbolic or material forms, providing the conditions for future relationships based on the mutual recognition of the equality and dignity of all.

In theory, then, reparations should both compensate for the losses suffered, helping to overcome the consequences of the violence; and be future-oriented, helping to eradicate the underlying causes of the violence and victimization. In a country like Peru, where historical marginalization, discrimination and injustices against Andean and native populations preceded and in a certain sense gave rise to the internal conflict and the massive violations of human rights that came along with it, the second goal is particularly important.

What it implies, however, is not always well understood. To begin, it implies that a transitional justice restoring the victim to the original situation before the gross violations of human rights occurred can hardly be called justice, when the original situation included blatant violations of economic, social and cultural rights. Thus, it also implies moving away from the notion of retributive justice and towards distributive and transformative justice. As stated in this briefing paper by the International Center for Transitional Justice—ICTJ: “When the causes and consequences of poverty are not seen as directly relevant to transitional justice, reparations programs … may only lead to frustration and resentment.” 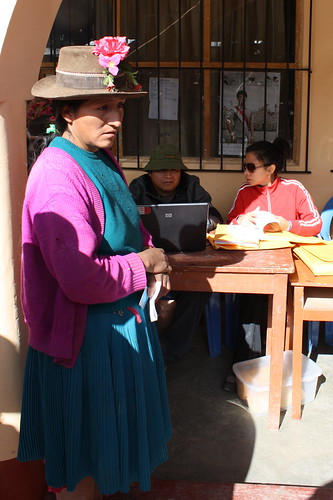 But back to the Peruvian case. The Toledo government realized important advances in the implementation of an Integral Plan of Reparations, as proposed by the Truth Commission. It promulgated a plan and the laws to regulate it, created a multi-sectorial commission to coordinate and monitor its implementation, and formed a Council of Reparations in charge of defining the beneficiaries and policies of reparation. The Program of Economic Reparations is a component of the Integral Plan of Reparations, along with other measures such as reparations in the areas of health, education, access to housing, etc.

Contrary to its predecessor, the outgoing government of Alan García has advanced little on the agenda of reparations. The only reparation program that has seen any substantial progress has been the program for collective reparations. To date, this program had benefited 1,672 communities affected by the violence.

While collective reparations do represent an expression of recognition of the state’s responsibility as well as an effort by the state to fulfill its obligation to compensate the victims of the internal armed conflict, successive evaluations of the implementation of the program by APRODEH and the ICTJ (the second and third evaluations are available online) found serious limitations to their reparative effect. They showed that, in practice, collective reparations were used as a way of compensating for the lack of basic services and infrastructure in the population, and were often not understood those affected as related to their status as victims of the internal conflict. 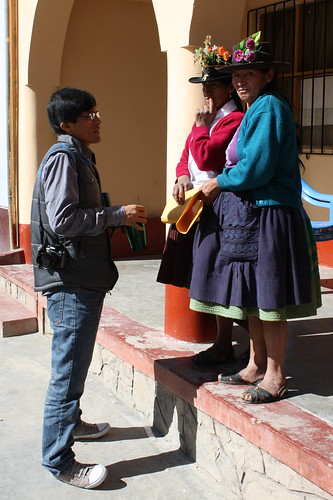 Collective reparations project are decided upon through participatory consultations with the affected communities. Given the depth and breadth of unmet basic needs in those communities, the chosen project are most often infrastructural in nature. In this context, the link between the harms suffered from the violence by the community and the chosen projects is not always clear. The communities simply do not have the luxury of identifying the project of reparation most symbolically appropriate to acknowledge and make up for the damage suffered; their immediate development needs and priorities win over.

Collective reparations, in these cases, rather than representing the implementation of a right that dignifies the victims, end up being mere attempts at satisfying a necessity. But the problem runs even deeper: by acting as substitutes for basic services that the state should be providing anyway, they negate the dignity and the rights of the population to these services.  Needless to say, the opportunity to restore the status of full-rights bearing citizens to the affected individuals is lost in the process.

As opposed to the Program for Collective Reparations, the process of individual reparations (which is what many of those affected are waiting for – see for example Karin Orr’s video “Request for Reparations in Putis”) has precariously moved along, dogged by a lengthy and bureaucratic process of registering the victims into the Registro Único de Víctimas—RUV, budget cuts, and  likely a lack of political will. 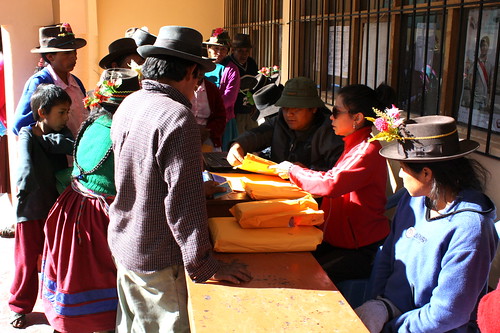 On June 16, 2011, while I was away in Ayacucho, Decree N° 051-2011-PCM on individual economic reparations was promulgated by the Supreme Court. The Decree establishes the amount to be granted to victims on the armed conflict that have been duly registered on the RUV and sets a conclusion date to the process of inscription onto the RUV. Given its contents, it was immediately and unequivocally rejected by organizations of people affected by the violence and defenders of human rights (a press conference held by various NGOs demanded the derogation of the Decree; also read EPAF’s official position on the matter).

The Decree states that on December 31st, 2011, the process of determination and identification of the beneficiaries of individual reparations will close. However, given the complexity of the process, the high number of victims that still have not been registered to the RUV, and the isolated location of many of those affected, it is difficult to justify such a closing date. During our last trip to Ayacucho, EPAF exceptionally accepted to distribute certifications of registration to the RUV on behalf of the Council of Reparations in the communities we visited. In the process, it became obvious how much confusion, misunderstandings, and expectations there are about what the RUV is, who can register, how to register, etc. It is, to put it simply, absolutely impossible for all of those eligible for reparations to be registered to the RUV by December 31st, 2011.

The amount of 10.000 soles per victim offered is another major cause for concern, as it demonstrates a not only a disregard for international principles and standards on reparation, but also for the suggestions made by the affected regarding what may be an acceptable amount. Yet another contentious aspect of the recent Decree is that to be currently eligible, affected relatives of victims of enforced disappearance or execution must be over 80 years old, and victims of sexual violations must be over 65 years old—the latter being rather ironic, given the fact that victims of sexual violation were almost always young women, who would not have reached 65 years old today. 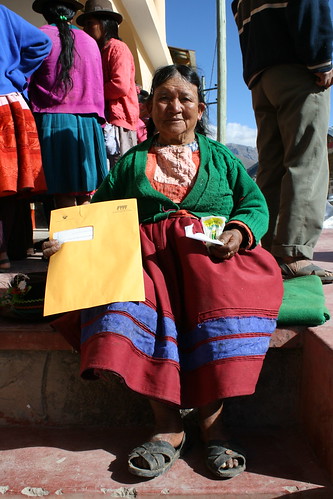 What does all of this say about the commitment of the current administration to justice and the dignity of the victims of the armed conflict? It is a vicious circle of victimization; a violation of the right of victims to receive reparation for previous violations of their rights.

As I mentioned in my last post, seeing the difficult conditions in which individuals affected by Peru’s internal conflict continue to live, and becoming aware of the linkages they themselves see between their experience of the violence and their conditions of poverty and exclusion, has made me reflect lately on the concept of justice. Justice undoubtedly involves compensation for the harms suffered.

But what might constitute appropriate compensation? The reality I am witnessing in communities like Huamanquiquia, Sacsamarca, Hualla and Putis, is that long-standing cultural, economic and social conditions, combined with weak public policies that at times could be mistaken for virtual absence of the state, continue to violate the basic rights of the population.  In this context, it is difficult to see how a reparation program limited to the one-off construction of an infrastructural project or individual monetary compensation that may or may not come depending on such arbitrary factors as one’s age may restore the dignity of victims and their status as full-rights bearing citizens.

I highly doubt that the legacy of the armed conflict is a debt that can be settled by any specific action or measure; it requires the affirmation and recognition of the dignity and rights of the victims on a continual basis. The Truth Commission understood this when it proposed an Integrated Plan that would provide for simultaneous measures in health, education, housing, etc. Unfortunately, this plan was only partially implemented by the successive governments. The coming change of government presents an excellent opportunity to revisit the policy on reparations, and hopefully follow more closely the recommendations of the Truth Commission on this matter.

In my view, the only acceptable reparation to the victims would not only compensate for the violence suffered, but also allow victims to overcome the consequences of their historical marginalization. By empowering them to take control of their own future and providing them with adequate conditions for the full exercise of their citizenship, it would establish equal relations among all Peruvians.

From this perspective, it is difficult to see where reparation as such ends, and where “development” begins. A program designed to correct the consequences of historical marginalization could include the implementation of preferential measures in the areas of education, agriculture and productive development, housing, health, etc. But if reparation is to take these forms, the way and context in which it is provided  is key to deliver the message that society acknowledges and values the dignity of the victims, and to differentiate reparation from social or development policies, making it clear to the population exactly what they are being compensated for.