The Legacy of Agent Orange and the American War in Vietnam 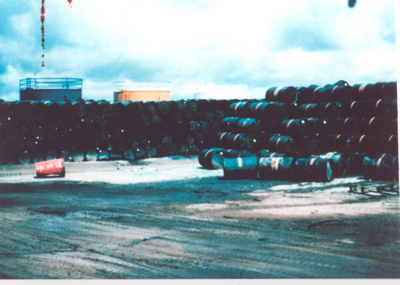 In 1961, acting on a request from US-ally and South Vietnam President Ngo Dinh Diem, and with the approval of US President John F. Kennedy, the American Military began a drastic scorched earth policy to combat the escalating civil war in Vietnam. Working primarily with chemical manufacturers Dow Chemical and Monsanto, the US military developed Operation Ranch Hand, which involved the systematic spraying of Central and Southern Vietnam with a family of potent herbicides.

The chemical family came to be called Agent Orange after the orange stripes on the barrels of the highest used formulation, although Agent Blue, Agent White, and others, known by their respective barrel stripes, were also used throughout the country.

This decision would prove to have dire consequences for Vietnamese and Americans, impacting generations after the war and the well-being of the ones who fought it.

In total, between 1962 and 1971, the U.S. Government sprayed 20 million barrels of chemical herbicide in Vietnam on 4.5 million acres of land, totaling 10% of the total landmass of the southern half of the country. “By 1971, the US Air Force [had] run 19,905 spray missions, an average of thirty-four daily, over the forests, jungles, and fields of southern Vietnam. The defoliation campaign [burned] a 5 million acre parking lot, an area the size of Massachusetts, into Vietnam’s countryside.”

With it, Agent Orange decimated entire ecosystems. In the coming years, the southern tracts of land beneath the demilitarized zone and the 17th Parallel came to ruins. As if overnight, the once pristine tropical vegetation transformed into blighted aridity.

The lavish application of the herbicide in Central and Southern Vietnam, and the prolific way in which the chemical seeped into the soil, ensured its legacy: entering the food chain of military and civilian Vietnamese alike, as well as drenching the American Soldiers ordered to soak the countryside. These veterans would later report they experienced lightheadedness, excruciating migraines, skin inflammation, and spontaneous bleeding from the nose and mouth:

“US records suggest that 2.6 million hectares were sprayed with [Agent Orange], that more than half were sprayed at least four times and that between two and five million people were sprayed directly. In at least 42 cases, emergencies meant that entire planeloads, 120,000 litres [approximately 1,050 barrels], were dumped in 30 seconds instead of the usual four to five minutes. Anyone underneath could have been soaked in [Agent Orange].”

Although it was not the stated intent of the US Military to target rice paddy fields and vegetable farms in the beginnings of Operation Ranch Hand, the de facto protocol proved otherwise. As early as 1963, journalists decried the use of herbicides as “dirty-war tactics,” knowing full well that the campaign was about much more than ground cover defoliation. By 1965, as much as 45 percent of the Agent Orange payloads were directed at crops. They contended, the use of Agent Orange was not solely being used to reduce ground cover, but to eliminate food sources outright, starving Vietnamese Soldiers and Civilians and contaminating their food supply.

Thus, through agriculture and regular spraying, Vietnamese civilians and soldiers came in direct contact with the chemical, where it entered into their blood streams, fatty tissue, and breast milk, and where the chemical would stay.

If Agent Orange were in fact harmless like the American Military and the chemical manufacturers contended, none of this would matter. But the sheer number of increased miscarriages, cancers, malignancies, and other unexplained health defects, began to circulate amongst the Vietnamese during the war:

“[The Vietnamese Farmers] said that farm animals grew weak, got sick, and even died after being exposed to defoliants… Saigon newspapers risked publishing stories about babies born with heads shaped like mice, pigs, and sheep, [sic] about two-headed babies. Peasants whose families had lived on the same land for generations said they’d never encountered such strange phenomena. Doctors and nurses who delivered these babies could not recall having seen similar birth defects before the American War.”

The North Vietnamese and the Vietcong began a large campaign reporting these incidents during the war, but the American Military dismissed it as communist propaganda.

It is known today, as the chemical manufacturers undoubtedly knew in 1965, that an unintended byproduct was created in the production of Agent Orange. A 50/50 mixture of two common herbicides known as 2,4-Dichlorophenoxyacetic acid (2,4-D) and 2,4,5-Trichlorophenoxyacetic acid (2,4,5-T). Neither of these two chemicals are particularly dangerous. However, 2,4,5-T, when processed too quickly, and without adequate temperature safeguards, produces 2,3,7,8-tetrachlorodibenxo-p-dioxin or, simply TCDD-dioxin, one of a class of chemicals regularly described as “the most toxic substance known to science.”

Dioxin is known to be poisonous to fetuses and cause malformations during their development. In laboratory mice, dioxin caused the failure of red blood cells, the rapid growth of tumors, and the degeneration of neurological communication throughout the body. It is known to cause cancer of white and red blood cells, lymphatic systems, liver, prostate, lung, larynx, and trachea. It is suspected to cause the swelling of infant brains to the size of their bodies, to cause children to be born without eyes or fingers beyond the second knuckle. It is speculated that dioxin might even be capable of mutating our genetic code.

Over the course of the American War in Vietnam at least three million were exposed to this substance. By 1975, the American defeat, and the Fall of Saigon, Vietnam was about to inherit one of the most complicated post-conflict situations in the history of modern warfare, the effects of which are still felt four decades later. However, as history has shown, despite the wanton destruction of war, chemical, or imperial power, the Vietnamese would not be defeated.