Agent Orange, From Those Who Know It Best 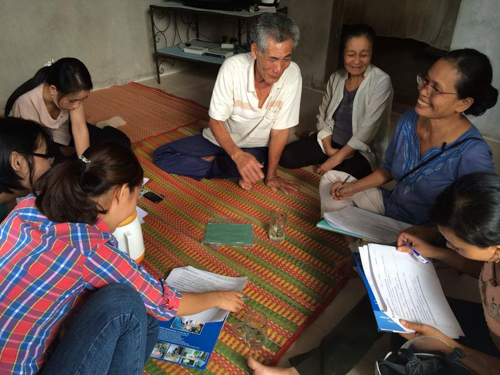 It’s been many weeks and preparation, but here we are in the first official day of the Agent Orange survey. Yesterday I worked with the AEPD staff drafting the online transcription of the English version of the survey, and then a staff professional development survey to begin transcribing the Vietnamese version. I had envisioned learning Google Forms would be a challenge, but the AEPD staff caught on with little prompting from me.

We now have online versions to share with our outreach team from the Department of Labour, Invalids, and Social Affairs, (DOLISA) and the Agent Orange Association of Quang Binh. Both of these governmental organizations work with AEPD on a regular basis and are connected to the provincial, district, and commune levels of government and civil society groups. Tomorrow we will be conducting trainings and preliminary tests on the survey with representatives from DOLISA.

Today, AEPD’s senior program manager, my translator, our hired consultant (a professor from Hue), and myself all met to discuss the survey from English to Vietnamese and back again. While much of the survey had already been translated, this meeting allowed us to get into the finer points. We discussed the nuances of Quang Binh Provinces and the cultural expectations of the rural Vietnamese as well as issues in formatting and structure.

At one point during the meeting, our consultant, Ms. Hoa, pointed out how strange a five answer multiple choice asking an Agent Orange survivor if they were very unhappy, unhappy, neither happy nor unhappy, happy, or very happy would sound in Vietnamese.

At first, I misunderstood her. Was it obvious how an Agent Survivor feels? I asked her.

Ha, not even close. She replied. The issue with the question was the feeling of being neither happy nor unhappy. I described this intermediary feeling as “ambivalent,” and together we looked up the word for ambivalent in the Vietnamese/English dictionary. It returned an answer roughly equivalent to “conflicted.” We both agreed that wasn’t really what was meant. After thinking about it, Ms. Hoa made another excellent point: what exactly is “ambivalent happiness,” much less “ambivalent unhappiness.”

But the take away from this meeting wasn’t just about senitments, it was also about the hubris of Western “understanding” for the Agent Orange issue. The most blatant version of this argument suggests that the resource base and the professional studies are more robust in the West, thus only western studies can be taken as legitimate. Of course, this couldn’t be further from the truth.

And it makes obvious sense why: the Vietnamese are the single highest percentage of people exposed to Agent Orange/dioxin in the world. Doctors in Saigon were reporting on this issue as early as 1967, only five years after the spraying campaign began. Those doctors never stopped even though they had little idea why so many children were suddenly being born deformed. And the Vietnamese families who came in contact with Agent Orange never stopped learning about dioxin from the moment the chemical was first used. In total, the largest first-hand, experiential knowledge of Agent Orange/dioxin belongs to the Vietnamese. No one knows the issue better than the Vietnamese.

Over the course of the meeting, we discussed the need to arrange the Agent Orange/dioxin linked conditions by the generations affected by the conditions. For instance, direct exposure to Agent Orange is known to cause only a certain subset of all the possible conditions dioxins can cause. Skin disease is high as are cancers and piercing headaches. Then, the children of the direct survivor, the first generation, are now susceptible to new conditions passed on through the genetic line, and so on through the second and third generations.

Where this gets increasingly complicated is in the determination of who a second and third generation survivor actually is. Consider: a young Vietnamese soldier from the North goes to fight in a heavily sprayed area in the Southern part of the country. This solider comes home after the war, has children (the second generation), and then falls sick and dies at a young age. Those children are then adopted by a caring family from the commune that the solider is from. By the time the 3rd generation children are born, one family’s history has become two, and the link backwards in time to the original exposure of Agent Orange/dioxin is that much harder to prove.

Or consider, the case of a person who is double or triple exposed. A mother who consumes food contaminated with Agent Orange passes on the dioxin to her daughter who also consumes the same food. Would the daughter’s daughter be a first or second-generation Agent Orange victim? Is double exposure additive? And would the double exposure be a higher priority than single exposure?

Obviously, I do not have the answers, but then I wasn’t even able to think of these questions. All told, I walked away from this meeting with a much greater understanding of the semantic and cultural variations between Vietnamese and English. In our search for understanding of the Agent Orange issue, we can learn much from those who know it best.