As plenty of my family and friends already know, I’ve spent the past few days in Dhaka attempting to recover from a strange foot injury. Bits and pieces of what happened have been posted on Facebook and Twitter and I’ve been in contact with AP, my family and close friends about the details, but needless to say, it’s been a downer of a week for me here in Bangladesh. The days have been a bit mashed together but I think it was Tuesday morning when it all started. I woke up with quite a bit of pain in my left foot and wasn’t able to really put any weight on it without intensifying said pain. Being the “tough” (or perhaps boneheaded?) former jarhead that I am, I took some pain killers, drank some water and stayed off of the foot for most of the day. Even so, each time I had to move somewhere, such as to use the restroom, or refill my water bottle, the pain increased. Eventually it became unbearable and I went next door to talk to Shahed about going to Dhaka.

This is where things got interesting. Shahed and a guest/friend asked me a bit about what happened, what I was experiencing, etc. and then gave me some sort of pain relief cream to rub on my foot. I used the cream and was also able to ice it for a bit, which seemed to help. Enter the apartment building handyman/security guy (jijur for those who I worked with in Mongolia). Thinking he can help, he offers to perform some traditional Bengali medicine on my foot. Naturally, I said sure, go ahead…as long as there are no needles or the ingestion of any questionable medications involved. This guy explained, through Shahed, that it appeared as though something was wrong with the veins in my foot and we needed to get the blood flowing. At this point I was trying to determine whether the injury was a sprain that I inflicted upon myself in my sleep, or the result of some exotic and terrifying insect biting me in my sleep.

My new friend and savior, whose name I can’t recall at the moment, began rubbing my foot with some mixture of mustard oil and what appeared to be salt. He explained that it was going to hurt but I needed to let him rub the foot or it wouldn’t heal. He began rubbing my foot and I did my best not to pull my foot away and scream. When I say he began rubbing my foot, I mean he was aggressively massaging my foot to the point where I couldn’t take the pain. After a couple of minutes, I pulled away and he stopped. The next step involved rubbing my foot in some large leaves that had been soaked in boiling water. This part wasn’t so bad and actually felt pretty good. After a minute or two of that, he said he needed to massage the foot again. Foolishly I agreed. This time it was too much. The next thing I knew they were picking me up off the floor as I was regaining consciousness. I can now add “blacked out from too much pain” to the list of experiences I’ve had.

The rest of the night I tried to keep my foot elevated, iced it now and then and we had planned to go to Dhaka the next day. After a long cab ride, we arrived at Square Hospital, a private hospital that is supposedly one of the best in the country and services the more “elite” members of Bangladeshi society. To wrap things up somewhat quickly, they talked to me a bit, examined my foot, and took x-rays. The x-rays were negative, they provided me with prescriptions for a couple of pain and anti-inflammatory medications, and then we purchased an ice pack and a way too short for me crutch. I’ve spent the past five days trying to recover at the house of a friend from couchsurfing.org, who works for the Indonesian Embassy. She’s been an amazing host and aside from being stuck inside and in pain, the last few days have been pretty relaxing and comfortable. I’m hoping to get some work done tonight and then head back to Sonargaon in the morning, where I plan on getting back on track as quickly as possible. More work related blog posts coming soon! Thanks for reading.

Here’s a pic I snapped from the roof of the apartment I’m staying at, nice sunset. 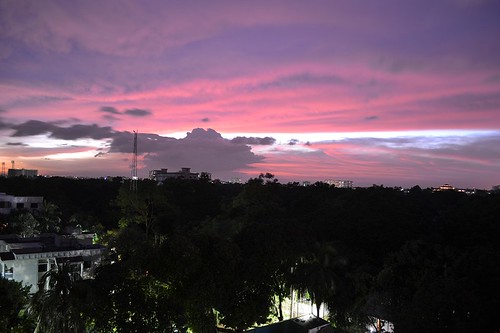