During the post election riots of 2008, much of the anger and violence in Nairobi about what many in Kenya perceived as a stolen election was perpetuated on the Kikuyu tribe (the tribe of the newly “elected” President Kibaki). Looming over the slum of Kibera is a seven story building highly visible and widely known to be owned by a Kikuyu. During the violence, a mob approached this building prepared to burn it to the ground. The only thing that stopped them was that on the very top floor of this building was a community radio station called Pamoja Radio. “We told them that this station belonged to all of them. They agreed and went elsewhere.” This from Antony Nyandiek, the 23 year old station manager who showed us around the radio station.

This moment is emblematic of just how significant the medium of radio is in the developing world. It is cheap, it is pervasive, and it is therefore powerful. In recognition of this, aid organizations, including USAID, have begun to fund local radio that supports civic society and community empowerment. Because the Digital Story Telling Project at the Undugu Society has similar goals, we were visiting Pamoja with the hopes of building a partnership between their work and ours.

Before arriving at the station, I had come up with a list of questions, many of which centered around Pamoja’s willingness to do youth radio. Then I met the staff…who were all youth themselves. No one was older than 27. In fact, instead of citing the token youth radio programs that they had, they instead pointed out segments of their programming meant for, “the older people” in Kibera.

Pamoja is only a year and a half old, but it already is a well known entity in Kibera with an ever expanding line up of locally relevant radio programs. These include shows on drug abuse, women’s issues, HIV/AIDS, and a new program meant to deal specifically with youth perpetuated crime and violence. All of their reporters are young people from Kibera who are daily in the community in order to gather the local news. 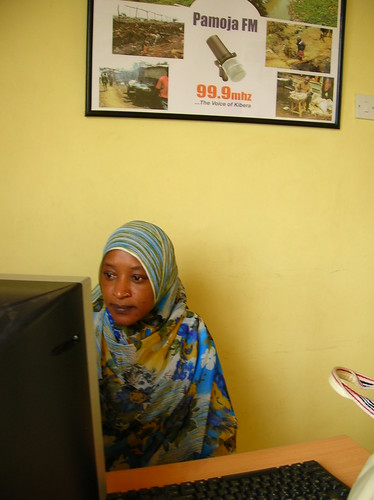 On Saturdays, Pamoja hosts a competition that features local artists; the winning artist (based on call in votes) wins a free recording session with a studio in Nairobi. And because the station broadcasts mostly in Kiswahili, this again increases its accesibility to the impoverished populations that stretch out to the horizon on all sides of the building.

Along with us on the visit were Martin and Joseph, two participants in last year’s Digital Storytelling project. As we were moving through the cramped rooms of Pamoja, Joseph, who is shy about speaking English, kept saying, “This is very exciting. This is very exciting.” And it is. This station transmits a very important message well beyond the strength of its FM signal. That message is that if you give young people a voice, they will more often than not use it in creative and constructive ways. Moreover, if it was able to stop a mob once before, perhaps there is hope for a more peaceful election in Kenya the next time around.