On Friday, July 31, 2009, the Delegation on Women’s Empowerment from Yaounde came to Balitown to celebrate the 47th Edition of the Pan African Women’s Day. Held at the Bali Grand Stand in the center of town, the festivities included traditional music, dress, and dance and skits that highlighted the roles women play in Cameroonian society. Clad in their own traditional fabrics, representatives from all the women’s groups of the North West Region came together  to honor the African woman and, as fellows working with one of the most active women’s groups in the province (Nkumu Fed Fed), Johanna and I were invited to attend and participate.

Themed “Combating the Exploitation of Women and Girls,” Friday’s event included speeches, activities and demonstrations that called on men and women in Cameroon to take up the fight against inequality and discrimination. In his closing remarks, Governor of the North West Region Abakar Ahamat discussed difficulties women face across the country and the need for all Cameroonians to show better appreciation and respect for what women bring to society. 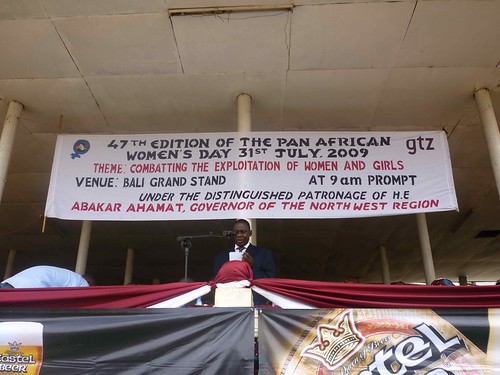 Governor Ahamat presided over the ceremony, exalting the women who are fighting for a better future for Cameroon and working for women and children’s rights in almost every way imaginable. From activists against child trafficking and denouncers of FGM and breast ironing to women’s rights and empowerment advocates, the gathering of such strong and motivated women was a truly awe inspiring experience. 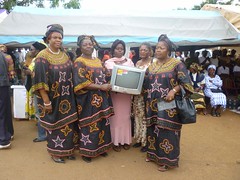 During the celebration, the Women’s Empowerment Delegation awarded several NGOs prizes in recognition of their hard work and dedication. For its achievements in combating child trafficking, Nkumu Fed Fed won the top award!—a 14-inch TV that will go to NFF’s Gwan Multipurpose Center, the transitional home for victims of child trafficking. 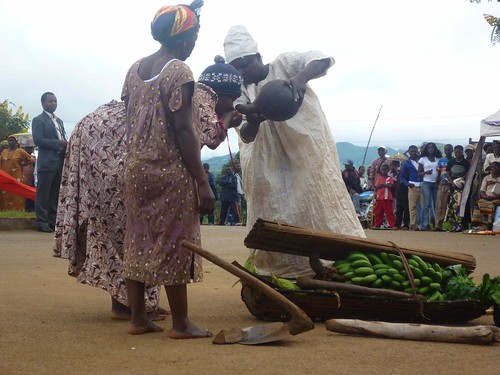 The event also included a fashion parade that honored the cultures and peoples of Cameroon, paying tribute to the many contributions women make to their families, communities and country. Pictured above is a reenactment of the heavy load women must carry during a typical day of work in the farm, emphasizing their constant support of one another. 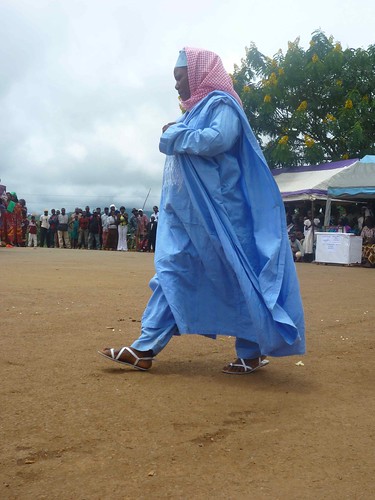 As a minority in the state and living primarily in the extreme north, Muslims in Cameroon are often times overlooked as key stakeholders in the nation. Above, a Fulani woman marched in the parade, representing the women of north Cameroon.

Participants also reflected on the cultural practices that hinder women’s freedoms and rights. For example, in the performance depicted below, a woman is being forced into an unwanted marriage as a narrator explains how the bride was not consulted and her opinion not taken into account as the arrangement was made.

Below: A traditional dancer of the NW performs in the parade

Closing the ceremony, the women marched together in solidarity. (Johanna and I marched with them, alongside the Nkumu Fed Fed federation!)
[Sacrifice Sign]

Finally, following the march and demonstrations the women finished off the celebration with traditional music, drums and dancing.

The video below has a few excerpts from the vibrant and colorful festivities of the day.
httpv://www.youtube.com/watch?v=vYLUmm8qf8w

As Governor Ahamat quoted in his final speech, ”there is a woman in everything great,” and I would have to agree. ☺