Juliet Hutchings (World Peasants and Indigenous Organization - WPIO): Juliet’s passion for telling stories through film and video took her to the NGO Veronica’s Story, and then to Ethiopia where she documented how the international community is working to eradicate the AIDS virus and help orphans find safe, healthy homes. She worked on several documentaries during her undergraduate studies at Northeastern University in Boston. Juliet has also made an historical film about how children perceived the Communist regime in 1950s Central Europe, in Prague, Czech Republic. She has also made a short film about the nonprofit organization HIPS, Helping Individual Prostitutes Survive. At the time of her fellowship, Juliet was in her final year of an MFA program in film & electronic media at American University in Washington, DC. After her fellowship, Juliet wrote: “There are always benefits to these community connections: time and again, no matter who I talk with about my experiences in Africa, I hear the refrain, “It’s people like you who are helping people like me, one at a time, to understand what the world is like, and that there is a group out there (the pygmies) who are in deep danger and need assistance.”


Pascal, Freddy and their Mission: The Beginning 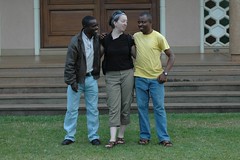 Pascal, Me and Freddy, our first full day together

Pascal and Freddy. Where do I begin? These 2 men defy description, at least in the sense that I don’t think I can conjure the superlatives it would take to truly portray them. In fact, I don’t think that they really can be described. These 2 men must be experienced. From my first moments in Entebbe at the airport, when they stood in a long line of folks holding signs, I saw my name and I saw their smiles and I literally fell into their arms, with strong, committed hugs. We were friends already.

They drove me to my new home at their compound in the Kyebando (pronounced “Chai-a-bondo”) district of Kampala. There, they showed me Freddy’s, Pascal’s and then my own apartment. Because mine was unfurnished (and still is!), Freddy had made up his home just for me, and had already transferred his own personal effects to Pascal’s. I had a bed, a couch, a bathroom–even a television!–waiting for me as the necessary creature comforts for a cranky, jet-lagged, under-the-weather American girl. But, before I toddled off to bed, Freddy gave me one of his cell phones (remind me to talk about cell phones later) and a new sim card. I was able to call both of my parents back in the states, as well as a very dear friend, and let them know I was safe and sound! After that, they treated me to a soothing, tasty tea, replete with crumpets, bananas, fresh avocados and tiny, tasty g-nuts (very similar to peanuts, but local flora).

Since that first night here, Pascal and Freddy have been unflinchingly gentle. I have resurrected my long-forgotten French with Pascal; his 2nd language is French, his 3rd is English. Together, we help each other master the others’ tongue. Since my incident on the motor bike (see my earlier blog for details), Pascal has been tenderly attentive to my wound–ensuring that it does not get infected; taking me, twice, to the Kololo Hospital by our offices at Amnesty; paternally scolding me when I walk too much. He, himself, has been trained as a doctor, and insisted on overseeing the first few cleanings of the wound so that I would know the proper method to keep it infection-free.

Freddy and I laugh a lot together. We have a truly unexpected and glorious sympatico. He is wise beyond his years and we have a very open and honest relationship. Our communication is not sugar-coated, nor is it merely raw, but a pleasant meandering of truth, wisdom, and total hilarity.

What does all of this mean to us as we three embark on our summer together? What am I going to do for them–with them–to help make their organization the large, human rights entity it deserves to be? I am going to make a documentary; guide them in creating a website; help them get donated computers. And, with the foundation of friendship that the three of us are building, I sense that what we will achieve, as it comes into focus, is greater than that which we originally imagined. Being on the ground with these two men has brought into strong relief the reality of what they are–and now I am–doing. With their kind hearts (but they never, ever forget how to joke or be sarcastic!), I will go with them to meet an incredible indigenous woman from the Congo (the DRC) who, with her 7 children, has sought refuge here in Kampala, away from the unbearable, unbelievable violence that she and her family experienced in their home. Her story is here, halfway down the page, titled: ”
The Sad Story of an Indigenous Family in the Eastern Democratic Republic of Congo”

As the days tumble into weeks and I get more and more acclimated to my surroundings, I am reminded why I am here: Pascal and Freddy will not rest until indigenous people everywhere know their civic rights and demand them, just as these 2 honourable, kind men do, themselves