Juliet Hutchings (World Peasants and Indigenous Organization - WPIO): Juliet’s passion for telling stories through film and video took her to the NGO Veronica’s Story, and then to Ethiopia where she documented how the international community is working to eradicate the AIDS virus and help orphans find safe, healthy homes. She worked on several documentaries during her undergraduate studies at Northeastern University in Boston. Juliet has also made an historical film about how children perceived the Communist regime in 1950s Central Europe, in Prague, Czech Republic. She has also made a short film about the nonprofit organization HIPS, Helping Individual Prostitutes Survive. At the time of her fellowship, Juliet was in her final year of an MFA program in film & electronic media at American University in Washington, DC. After her fellowship, Juliet wrote: “There are always benefits to these community connections: time and again, no matter who I talk with about my experiences in Africa, I hear the refrain, “It’s people like you who are helping people like me, one at a time, to understand what the world is like, and that there is a group out there (the pygmies) who are in deep danger and need assistance.”

I see construction workers and gardeners. Freddy and Pascal see peasants who are overworked, under paid and live on the edge of vile servitude.

This is an interesting contrast, to say the least. With my highly American eyes, I envy the gardener who digs in the hillside on a gorgeous, sunny day. It’s exercise, it’s creating something beautiful and, in America, it pays (relatively) well. He’s not trapped in an office, wiling away his hours in front of a light-box, letting his legs atrophy with lack of movement.

Right, Jules. We’re not in America. This is Africa. And, in Africa, the gardener whom I envy may be sweating bullets just to get a 1 minute break. His boss may berate him, publicly, if he finds him taking even a 5 minute sit-down.

The construction workers who swarm the many-leveled building that rises up somewhere between the bustling corridors of Kiira Road and Upper Mulago Hill Road–between the beautiful and wealthy Kololo District and the esteemed hospital district of Mulago; where young school children, dressed in immaculate, crisp, navy blue uniforms, carry snacks and goodies on their way home–too many of these construction workers toil from sun-up to well beyond sunset (often as late as 11 p.m. or 12 a.m.) The pay: maybe 3000 Ugandan Shillings (USh). Translation: Just under $2.00 U.S. Dollars (USD). For ONE day.

Now factor in that a 1.5 liter bottle of clean water costs, on average, 1000 USh. Or that one egg is 200 USh. According to Freddy, these men–these peasants–rarely get work breaks, and you can see how closely they ride the line of slave labor.

Freddy and Pascal are working, tirelessly (on some nights, getting only one hour of sleep) to attain the rights of these peasants that have migrated to or sought refuge in Kampala. Most often, they are here to seek wealth or sustenance or, simply, life. But, instead, these people who were outcast in their homelands, or who simply wanted to forge a better life, are finding that the discrimination, poverty and real danger they felt at home is not that far from them, even in the safety of Kampala. Ignorance about indigenous people is rampant, with folks easily accepting that pygmies are a curse and refugees are no more worthy of a good job than a dog on the side of the road. The paradigm must shift here in Africa if everyone is to be free to earn enough, live well enough, and say what they want to the world and their governments. 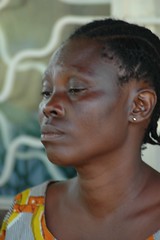 As Freddy, Pascal and I stroll by the open-air market on our way home, they scoff at the prices they are charged for foodstuff. Again, my American eyes bulge, in awe of how cheap everything is. “Juliet, it’s all relative. That man on that construction platform may not even be able to afford one bunch of bananas.” I am growing new, worldly eyes, even as I write this.