Pieces of the puzzle starting to come together

Everyone is talking at the same time. No one can hear what anyone is saying.

It’s Monday, August 31st. I’m at a meeting with all the institutions dealing with domestic violence in Cali. The point of the meeting is to agree upon the competence of each institution but people don’t seem to be agreeing very much.

The two main institutions,  “comisarias de familia” – family inspectors – and the Colombian Institute of Family Well Being (Bienestar Familiar) both claim they are doing more than they’re supposed to. Alba Nora Casanova, a police officer from the Child and Adolescent Unit points out that the Unit is the only institution to be open 24 hours. Police officers don’t know where to send children after 4pm and often end up taking them home with them because they can’t bear sending them back to where they live.

Everyone agrees that there aren’t enough resources and there’s no place to send victims of domestic violence, whether they are children or women, other than back to their homes. There also isn’t enough of a network. Institutions need to integrate their efforts.

For me, loose pieces of the puzzle are finally starting to come together. For weeks, I’ve been hearing story after story of victims going to report domestic violence, then being sent from office to office and finally back to their homes, to the same aggressors, to continue living in fear for their lives and the lives of their children. Since I’ve arrived I’ve been wondering: where does the gap lie? Why are all these women and children not receiving adequate protection? Of course the problem is incredibly complex and there are multiple factors. But if the institutions can’t even agree on what their respective functions are, isn’t that already a good explanation of why they send victims from office to office, without ever giving them adequate solutions?

The sub-secretary of Government, Police and Justice, Fortunato García notes that « Medellin has one million more in their budget than Cali » and proposes to create a « special committee » with members of each institution to make a definite agreement on the matter, as well as a committee to deal with the question of shelters. “What do we do in the mean time?” intervenes Martha Espinosa, director of the observatory on family violence. “We must take our responsibility now. Every day, children and women are suffering and police officers can’t always take them home. This has to stop immediately. We must take temporary measures while thinking of a long term solution.”

Deifan Arrechea from the Department of Territory Development and Social Wellbeing speaks up. “We have resources and plans to build ‘hogares de paso'” – shelters for children and women to stay for 8 days when ‘in crisis’. Yet 8 days is not enough. “Where do we send the kids after 8 days?” asks one of the participants. “We need to create permanent homes for the kids and have more shelters for women.”

Ironically, the meeting was held in the Department of Health, where 4 years ago, an employee was shot by her husband and died several hours later in the neighboring hospital. Full story to come… 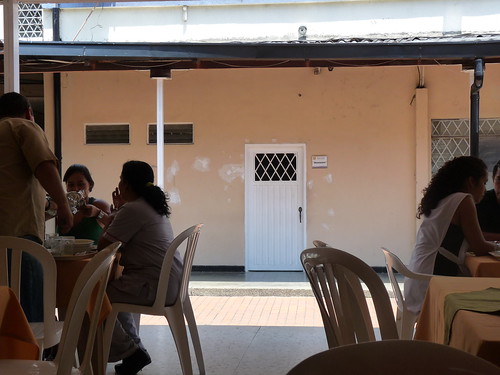 4 years ago, Enelia Garcia, an employee of the Department of Health,

was shot by her ex-husband in her office in front of the cafeteria.

A few days later, I met with Deifan Arrechea and Ana Cristina Hurtado, from the Department of Social Wellbeing. “For us, this meeting was a success! We finally got the decision-makers to come, sit down and recognize the problem. There is a culture of seeing domestic violence as a ‘private matter’, a ‘women’s problem’. We would love to make shelters that could receive more women for a longer time, but there just isn’t the political will or the resources. International pressure might motivate decision-makers to commit more to the issue!” The idea is indeed to put on pressure from the inside and the outside with campaigns of the women activists of Cali and IANSA’s Women’s Network.

For now, Deifan and Ana Cristina are planning to open a shelter to receive 50 women with 3 children each – for 8 days – to find stability, psychological and social assistance as well as a socio-economic contribution to help them become more independent.