A former member of parliament from Kilgoris, the present Kenyan ambassador to China, Mr. Julius Sunkuli, expressed his opinion about Maasai girls’ education in Kenya and how he would like to support his old friend, Kakenya Ntaiya, for her second dream–a primary girl school in Enoosean–Kakenya Center for Excellence.

Luna Liu: I am here with Kakenya Ntaiya working for a women organization called Vital Voices. We believe that one of the most important methods of empowering women is education. I hope to hear your opinion about the meaning of girls’ education in Kenya. 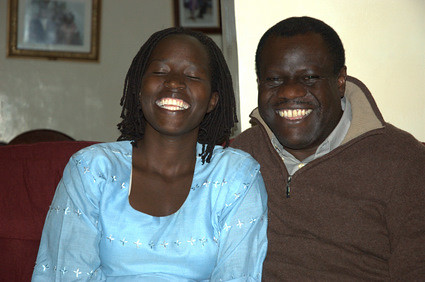 Ambassador Julius Sunkuli: The education to girls in Kenya is important especially among Maasai tribes. Maasai women have been oppressed a lot in the history. Also, traditional Maasai communities do not pay attention on educating girls. In lower grades of primary schools, the number of (Maasai) girls may be even more than the number of boys. However, in the secondary schools, there are very few girls, because most of them get circumcised and married out. It is therefore important to empower Maasai girls especially through education so that they will have more opportunities and choices on deciding their own lives.*
Luna Liu: Back to the time when Kakenya was chasing her first dream to get her higher education in the U.S., as a Member of Parliament from this region, you assisted her by fund raising. Now Kakenya is back to her and also your community to build up a primary girl school, how would you like to support her to realize her second dream?
Ambassador Julius Sunkuli: I would like to support her, I will take pictures of her schools, (joke) and make sure Maasai people send their children there. But I think Kakenya requires strong partners in educating Maasai children. I would like to be a partner of hers on education of Maasai children and to contribute. I may not have the funds, but I should be able to help fund raising for the development of the school, Kakenya Center for Excellence, because she is a good example of excellence.
*The answer for the first question was edited by AP Fellow Luna Liu based on the interview notes and the answer for the second question was voice-recorded.

(Kakenya Ntaiya, the founder of Kakenya Center for Excellence, described her friendship with Mr Ambassador and his supports to her primary girl school. Video produced by Luna Liu, AP Fellow, 2009 in Kenya.)