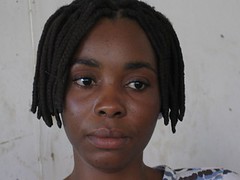 The whole time I’m talking to Clairance Mpawenimana, I’m struggling not to cry. Not because of what she says, but because of what she’s not saying. She has been introduced to me as a survivor of Gender Based Violence, but although we talk at length about the war and her experiences during that period, GBV remains the elephant in the room; as we approach the subject, she looks away, and I can’t push her further.

Introducing herself, she tells me that she has just finished secondary school, and hopes to go to university next year to study humanities. She was only a child in 1993, but children remember things and the images return. She was living in Kinaba at the time, one of the most affected areas, and she remembers seeing people killed because of their ethnicity, something she didn’t understand at the time (this is common in Burundi; many survivors relate that the first time they knew their ethnicity was when they lost relatives in one of the various periods of massacres). Because there was war in the quartiers, they fled to the mountains, and when they were bombarded there, to Congo; you have to be pretty desperate for Congo to seem like a safe haven. Life there was difficult, but they survived, and, eventually, they were able to come home.

On their return, they found that the family was dispersed, with many dead. She felt wounded, angry and defeated, and was depressed about hers and the country’s future. However, through involvement with CEDAC, she was given six months of training by Search for Common Ground. This was vital in helping her heal her body and spirit, and helped her finally to forgive her former enemies. They were trained to promote unity and be a good example in their communities, something she has tried to do through her work with CEDAC,where she participates in peer support meetings and tries to spread CEDAC’s message in her wider community. Turning back to the war, she says that she still finds it hard to understand what happened, but says that the priority must be to ensure that they never return to that position. She says that the future will be better if all Burundians changed their ideas. She has high hopes for the elections in 2010; although there are obstacles, she feels that only a few have bad ambitions and she hopes that the majority will prevail. She hopes to be a part of changing these ideas, and in helping CEDAC’s work of using the forces use for destruction to rebuild her country.

Listening to Clairance share her story and her hopes for the future has been humbling. She is younger than me, but has faced more than I can imagine, and has picked herself up, and is now trying to help others in her community do the same. Talking to her, I desperately want to wave a magic wand and make this whole country better, but, unfortunately that isn’t an option. Instead, I hope that by empowering young people like Clairance to claim peace and rebuild their country, we can contribute to ensuring that no more young people have to go through these things – in this country at least.